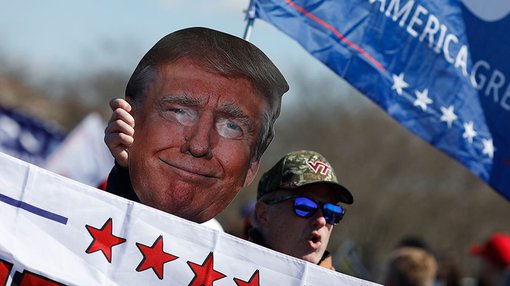 President Trump’s address to Congress fired up US equities markets overnight as he reiterated his stance on infrastructure spending, tax breaks and an easing of regulatory conditions within financial markets.

However, one has to question his ability to deliver, something he hasn’t been able to explain to date. While Trump’s playbook is very different to Barack Obama’s, he still carries the same record levels of debt.

That being the case, it could be argued that he needs to explain how the books will be balanced with lower income being generated through tax cuts and increased expenditure required in order to fund infrastructure projects.

Scott Shellady, a well-respected Wall Street commentator and trader generally has a positive view on markets, and his iconic bulls hide jacket tells the story. In the video below which was shot in January he pointed to several economic factors which demonstrated that markets were running on hype rather than substance.

It is worth noting that this video was taped on January 6 when the Dow was sitting just below 20,000 points.

Shellady reiterated these thoughts after the market closed last night, saying the market was priced for perfection, arguably conservative at a stage when many analysts are saying it’s overcooked.

Numbers don’t lie – or do they?

However, if the old saying ‘numbers don’t lie’ is applied to the current situation there is no doubting the fact that market sentiment is extremely positive.

Interestingly though, the gold price is holding in the vicinity of US$1,250 per ounce, perhaps indicating that some investors may be using it as a hedge should markets unravel.

The bullish conditions were contagious as the FTSE 100 stacked on 120 points to close at 7,382 points.

There were even stronger gains in mainland Europe with both the DAX and Paris CAC 40 up by about 2% closing at 12,067 points and 49,60 points respectively.

Base metals all trended higher with zinc and lead putting in the best performances as they gained more than 1% with the former closing at US$1.29 per pound after touching US$1.31 per pound earlier in the session.

There was little movement in the iron ore price as it continued to hover in the vicinity of US$91.00 per tonne.

The Australian dollar is fetching approximately US$0.77.

Australian markets are expected to open substantially higher on Thursday with the financial sector leading the way and miners benefiting from overnight commodity price movements, as well as being supported by the underlying theme that infrastructure spending will generate demand for metal products, and the flow on impacts of fiscal stimulus will see an uptick in consumer spending on everything from houses to toasters.

Looking at the possible near to medium-term flow on impacts, the likelihood of a Fed rate hike in March has strengthened, and this could be a catalyst for Australia to follow suit.