What are the top traded stocks in November?

According to global multi-asset investment platform eToro, Australian retail investors piled into stocks of companies that are expected to perform well in the year to come.

Nio Inc (NYSE: NIO) remains as the top most invested stock by Australian investors, for the second consecutive month in a row.

Palantir Technologies’ (NYSE: PLTR) recent earnings report excites investors, as the company shows clear signs that the business is looking to grow throughout 2021.

Pfizer (NYSE: PFE) has skyrocketed into the portfolios of many Australian investors in November, as the company announces its vaccine is 95 per cent effective. 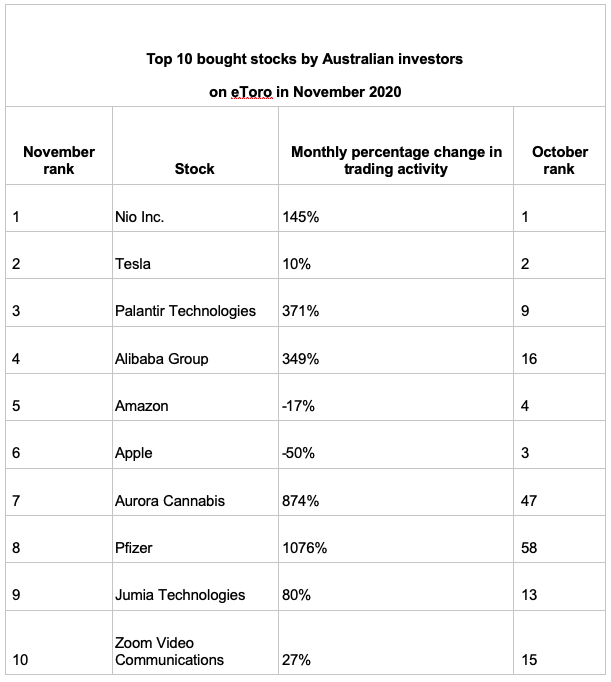 Nio has seen a huge gain of 145 per cent in trading activity in November, as investors look to pile into the stock after what can only be described as ‘FOMO’ from its 1,000 per cent price increase this year.

The EV sector has had a phenomenal run in 2020, despite a market sell off in early March. Nio Inc has outperformed Tesla so far this year, which is surprising as a year ago many investors wouldn’t have thought twice about the Chinese automobile manufacturer.

The recent news that Tesla would be added into the S&P 500 later this month has sent the share price racing in November, gaining more than 40 per cent. The move means that the hedge funds tied to the S&P 500 will have to buy billions of dollars’ worth of shares in the company to add to their portfolios, which investors are seemingly pricing in.

Palantir’s increase in revenue guidance has excited investors, as they start to clue in around the potential behind the stock. Its recently released first earnings report was positive, and showed clear signs that the business is looking to grow throughout 2021. The company has also worked closely with the US government over the pandemic period, which puts them in a great position to continue to work with government agencies, such as the US Army and intelligence services.

Alibaba’s share price tumbled in November, falling as much as 15 per cent. With expectations that the eCommerce industry will continue to accelerate in 2021, investors have seen this as a prime opportunity to purchase shares in Alibaba. Alibaba also recently recorded around $75 billion in sales from The Singles Day event, with $5 billion of these sales coming directly out of US. This shows a continued resilience from Alibaba to grow outside of the Chinese market.

Pfizer, the front runner behind the coronavirus vaccine, has skyrocketed into the portfolios of many Australian eToro investors in November, with a 1076 per cent increase in trading activity. Pfizer’s stock gained around 11 per cent in November, as the company announced the vaccine they had produced was 95 per cent effective.

With an impending decision from the US FDA to approve the drug, the mass scale in which the vaccine would be purchased will provide Pfizer with a steady income stream in the short term. The vaccine has also been approved for emergency use by the UK government, with more than 40 million doses of the vaccine purchased. This is set to pave the way for mass approval around the globe.”