The global financial news hub attributed a significant proportion of the strong performance to China’s plans to expand measures that should stimulate economic growth.

“A promise of new stimulus by China spurred gains for mining stocks, as China is a major buyer of metals, including being the world’s biggest consumer of industrial metal copper. Mining stocks comprise 86% of the weighting in the basic materials sector on the FTSE 100, FactSet data show.

Of course, the bigger picture which includes the tussle between China and the US is taking centre stage with US president, Donald Trump saying that he is ready to put tariffs on all Chinese goods imported to the US, equating to about $500 billion.

In retaliation, China has issued levies which will create a similar impost.

Interestingly, the argy-bargy between the two countries has not sent global equities and commodities markets into freefall as it did in the latter part of 2018.

Of the four key base metals used in the manufacture of industrial materials, copper, nickel, lead and zinc, the latter has delivered both the best performance over the last six months and on a year-to-date basis.

While lead has generally run its own race over the last 6 to 12 months, zinc, copper and nickel all staged a significant recovery at the start of 2019.

Though zinc faltered a little in late January/early February, it went on to significantly outperform the other two commodities, and since January it rallied 25%, hitting a high of US$1.37 per pound in mid-April.

It has only come off marginally since then, currently trading in the vicinity of US$1.32 per pound.

Copper has been the second best performer, surging nearly 15% between January and February.

However, it has been range bound over the last two months, mainly trading between US$2.90 per pound and US$2.95 per pound.

The sharpest fall during this period occurred over the last two weeks as the red metal fell from US$2.97 per pound to less than US$2.90 per pound.

As well as delivering a robust 6 month performance, it is the resilience that zinc has demonstrated over the last three years that is arguably its most outstanding characteristic.

The following five-year chart shows zinc’s surge of approximately 150% between early 2016 at the start of 2018 when it surpassed US$1.60 per pound, a level it hadn’t traded at for more than 10 years. 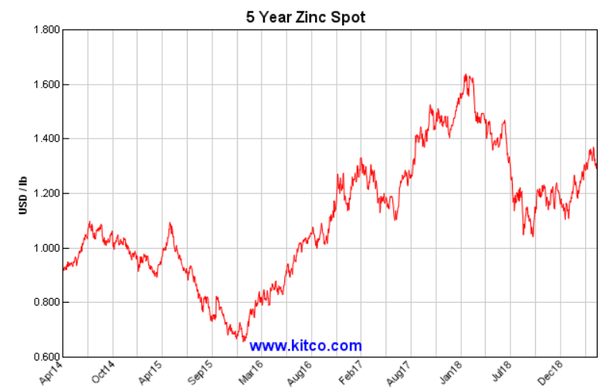 Zinc rebounded quicker than most other base metals, and the extent of its recovery outpaced most other metals.

When one considers that it is less than 20% shy of the US$1.60 mark, it could be argued that some stocks leveraged to the metal should be trading more strongly.

However, when it comes to investing in mining equities often the big picture regarding the key commodities is overshadowed by other factors, and with this being the case there is often value to be found.

We identify one emerging player in the zinc sector which is about to embark on a 7500 metre drilling campaign in a highly prospective zinc mining region where it has already had success.

The company is Zinc of Ireland NL (ASX:ZMI) and data from upcoming drilling combined with promising prior exploration results could result in a significant resource upgrade by the end of 2019.

ZMI released its Maiden JORC Inferred Mineral Resource for its McGregor and Shamrock prospects at its 100% owned Kildare Zinc Project in Ireland in June 2017. 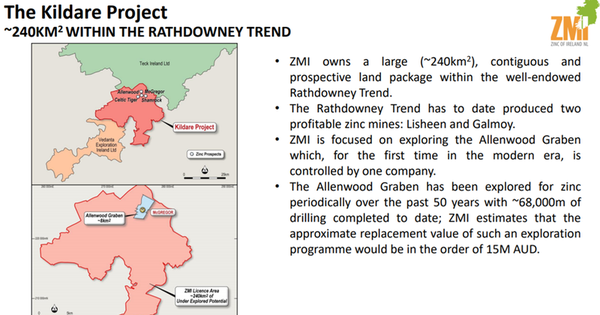 The Maiden Resource is large at 5.2 million tonnes, and the grade is robust at 8.6% combined zinc and lead.

While a grade of 10.1% would be impressive, it is worth bearing in mind that based on comparable projects surrounding Kildare, a zinc price of less than US$1.20 per pound could potentially support a highly profitable project working on metrics of 5.2 million tonnes grading 8.6%.

It has traditionally been the scale of the projects and the volume of metal in the ground that have the supported long life/high return operations owned by blue-chip companies in this region.

As ZMI progressed the Kildare Project, institutional support emerged and in late January a subsidiary of Canadian based Dundee Corporation (TSX:DC.A) became a cornerstone shareholder with a stake of 19.9%.

It was at this stage that the company raised $2.4 million at an encouraging 25% premium to the market price.

This left ZMI with cash of about $4.6 million, allowing it to accelerate its exploration programs in a region that has the world’s largest tonnes of zinc per square kilometre and hosts a number of large, high-grade zinc mines, including Navan, Lisheen, Galmoy and Tynagh.

Importantly, the company is fully funded to accelerate exploration and development studies at the Kildare project, and management is looking to focus on adding high-grade resources while gathering information which will help in framing a strategy to optimise its economic viability.

The preliminary round of testing was designed to support the ongoing assessment of the economic prospects of the Kildare Project, and the results demonstrated its potential to produce high-quality, marketable zinc and lead concentrates.

The representative sample comprised a composite sample of approximately 50 kilograms of diamond drill core taken from the main zone of base of reef massive sulfide at McGregor with a head grade of 10% zinc and 1.8% lead.

Although these preliminary test results are indicative, it is expected that process refinements, including a basic process flow sheet, will lead to maximising the grade and recovery in future test work.