There has been a lot of talk about Tesla lately, with everyone from graphite and lithium explorers to energy suppliers looking to get in on the ground floor of Tesla’s renewable energy revolution.

Origin Energy is the first of the energy majors to do so.

Origin Chief Executive Officer Energy Markets, Frank Calabria said, “By offering rooftop solar with home batteries, Origin is able to provide households with greater control over their energy use than ever before.

“Customers can now also make their investment in solar work harder, as excess electricity produced during the day can be stored for use at a later time when the solar panels do not produce electricity.”

Tesla is already a global leader in battery storage and with 400,000 of Origin’s 4.3 million customers using solar energy solutions, it seems Tesla’s reach will extend even further.

The Powerwall is a wall-mounted rechargeable lithium ion battery that can power your entire house. 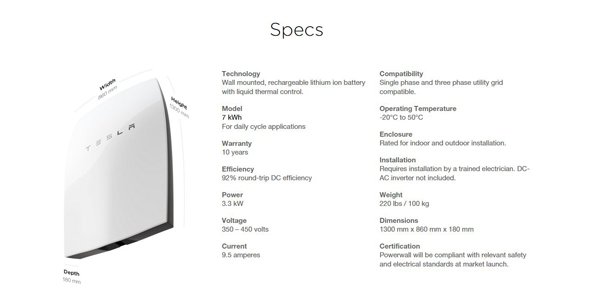 The release of the Powerwall is expected to see a spike in the number of Australian households switching to solar.

According to Gizmodo, the standard model being plugged by Tesla — for the average household — is the 7kWh Powerwall. Tesla Energy will also be supplying 10kWh Powerwalls for higher throughput, along with the commercial and utility scale Powerpack, which groups powerful 100kWh battery blocks for anywhere from 500kWh to upwards of 10MWh.

“Origin is providing customers with a simple, no-fuss solution by allowing them to buy their solar system, inverter and battery product from us, have it installed and monitored by us and enjoy the benefits of our post sales service support,” Mr Calabria said.

Home batteries will not be for everyone at this early stage. They are expensive, starting at over $16,000, meaning they are geared more towards early adopters.

And Tesla will not be the only solution available.

South Australian energy suppliers are currently working with Enphase Energy which is working on a more flexible and smarter management system.

Where they have an advantage is in smarter application. Enphase is combining Lithium Iron Phosphate batteries and some smart tech, to create a solid ‘plug and play’ system.

However Tesla is already a brand name. It is already working with global partners. It is supplying global brands such as Amazon and Target. It has, as we said earlier, junior explorers such as Lithium Australia (ASX:LIT), Metals of Africa (ASX:MTA), Archer Exploration (ASX:AXE) and European Metals Holdings (ASX:EMH) all searching for the mineral that will allow it to go knocking on Tesla’s door. And Tesla knows that any competitor is now playing catch up.

One would think that Origin has done the smart thing, especially when you consider that there are 1.4 million households with solar PV installed and Australia ranks 6th in the world for uptake.

Rooftop solar has been one of Australia’s renewable energy success stories and with Tesla admission to the market looks like it will only get stronger.