Telco & software developer in one? How Vonex is breaking the mould

As the roll-out of the NBN gathers pace, an unprecedented amount of businesses and consumers are looking at their telco provider to deliver more features and new products — all for the lowest possible price.

Perth-based telco provider Vonex has a significant advantage over its competitors by developing and engineering its own proprietary software and servicing traditionally underserved markets, such as small-to-medium enterprises (SMEs).

With the major telco’s using tech that is white labelled — meaning, it isn’t their software, but rather a solution that was created by a third party and re-branded — Vonex differentiates itself, creating highly-targeted technology that is cheaper to operate by minimising third party costs.

For a company that is already generating revenues nearing $8 million, this means significant upside.

Although Vonex remains a speculative stock and investors should seek professional financial advice if considering this stock for their portfolio.

Since 2009, Vonex has been striving to develop better software for the telecom industry.

Vonex’s major industry innovation is focused on cloud telephony systems, known as VoIP and PBX. Its flagship product is a proprietary PBX (Private Branch Exchange); a system connecting telephone extensions via Internet rather than on-site hardware.

The technology contains a seemingly endless list of features that are custom designed to suit SMEs. Since Vonex is behind the tech, it can offer these custom solutions at lower costs than the competition while also maintaining very healthy margins.

The award-winning telco company is gaining a larger slice of market share through its technological sophistication but also because of a diversified sales strategy.

Through its direct business unit, Vonex Wholesale, the company aims to sell its technology to the other major telco providers. The company has established an impressive track-record white-labelling its PBX solution to other major telcos – effectively turning the competition into an avenue for revenue generation.

Vonex Telecom — the retail division — is making impressive inroads selling PBX and NBN plans into the SME market via a channel partner. The partner effectively acts as a sales force that is well ingratiated with the SME community, ensuring Vonex is front of mind when SMEs look to evaluate their NBN options.

Vonex Telecom doesn’t just sell its own software but other products, including mobile phone services and home phones. With cash coming in via three different streams, it’s no wonder that Vonex’s current sales turnover target for this fiscal year is A$8 million.

Here is a graph of the company’s sales turnover per year since 2009: 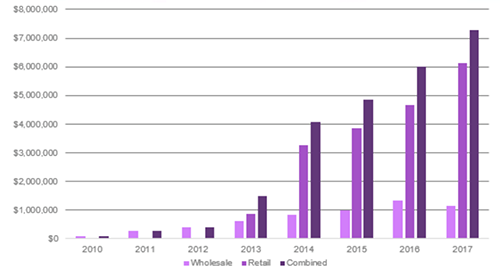 In addition to Vonex’s active sales businesses, the company also offers blue-sky potential through its development and engineering department, which continues to produce innovative telco products.

In 2016, the company developed a product called the ‘Vonex Chrome Phone’, which essentially allows people to make and answer calls from inside their web browser.

The below gives an idea of how the extension appears in-browser, within a large scale call centre project in South East Asia:

The Vonex Chrome Phone is powered by an in-house platform that Vonex has developed called the ‘Oper8tor Switchboard’ — which has been designed particularly for its much-awaited Oper8tor phone app, due for beta release in the second half of this year.

The company has white labelled the product, which is now being used under a variety of brands, enabling Vonex to capture new users requiring more specialist applications, via its wholesale business model.

The Chrome Phone fulfils Vonex’s vision to provide a mass-market option in place of a desk phone with headset set-up.

Another major development to emerge from Vonex’s innovation team is the Oper8tor platform. Vonex – which has been developing Oper8tor for several years – will allow users to connect to any social media friend through voice messaging and text, regardless of whether the contacts are using different applications. This capability has never been available before.

It will also conduct cross-platform messaging, allowing users of Facebook, Google Hangouts, Skype, Viber, WhatsApp, WeChat, Line to message and be part of voice calls through their platform of choice (still in development). Given it’s a world-first idea, Vonex has already protected Oper8tor with multiple patents.

The app syncs your friends contact details from apps and contacts lists, and also updates instantly as your friends make any contact changes across any of these platforms.

Oper8tor is currently in the alpha stage of development, however the company plans to raise capital towards taking the app through beta stage and then look to soft launch it towards the end of this year. According to Vonex CEO, Oper8tor already has 70,000 people registered to participate in the beta stage.

Below is a short video demonstrating how the app works:

More software engineering in the works

A particularly exciting project within Vonex’s creative development division is the platform LiveScribe, which Vonex has made available to the open source community.

In essence, this tech enables real-time in-call speech to text and text to speech capabilities for users. It utilises the latest in speech recognition and artificial intelligence (in particular, Google’s developments in this space) to provide users with live call transcription and a user-friendly speech to text engine.

This technology could provide an important solution for people attempting to communicate across barriers, including those posed by different languages as well as disabilities such as hearing impairments. According to the World Health Organisation there are over 360 million hearing impaired people worldwide, just one example of who this technology can help.

Beyond these obvious applications of LiveScribe, the platform also allows for post-transcription language translation as well, so that colleagues or stakeholders who may be interested in ‘catching up’ on the call afterwards are empowered do so, even if they don’t speak the same language.

With the progress Vonex has made to date the platform is currently fit to support Google Cloud’s speech-to-text capabilities — arguably the best of its kind currently available on the market.

These kinds of capabilities utilise Deep Neural Networks (DNN) technology, which is the same platform used by Google Duplex.

(If you want to be impressed about the possibilities of Google Duplex’s AI and speech recognition tech, check out the demo video in this article.)

Vonex’s LiveScribe solution currently prioritises English language support, in line with Vonex’s existing customer base, but is in the process of developing its capacity to live-transcribe conversations in other languages.

The range of platforms it has already developed provide a solid foundation for the company to develop and explore a seemingly limitless number of features and new product offerings down the track.

Note, as with all early stage tech stocks, success is not guaranteed. Consider your own personal circumstances before investing, and seek professional financial advice.