In a historic world first, five companies assembled from the IT, electronics and defence sectors including Apple, Panasonic, Raytheon, Intel and LG First have all unanimously agreed to sign a binding Heads of Agreement (HOA) to collaboratively manufacture and commercialise the RealEyes device.

RealEyes is a tech vision long in the making – a breakthrough device that promises to redefine the boundaries between virtual reality and the senses. Combined, the five companies’ economic prowess as measured by market capitalisation totals US$815 billion. 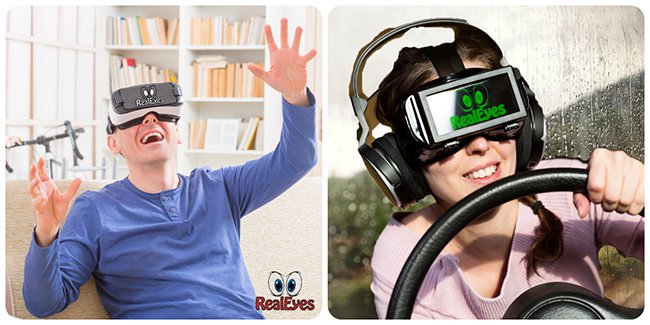 The ‘RealEyes’ device comes in both male and female versions, including built-in driving assistance.

The devices name has been acronymed ‘RealEyes’ – ‘Regressive Exophoric Analysis Loop for Existential Yield Extrapolation System’, and includes the most avant-garde developments known to science within the fields of nanotechnology, semiconductors, molecular chemistry and electronics. The majority of its sub-components have been manufactured from ultra-carbonised graphene superimposed onto stacks of high density lithium-ion nano battery packs that power the RealEyes device for over 14 days without recharging.

The RealEyes device is a virtual reality headset that once mounted on a person’s face facilitates a plethora of options digitally overlaid onto reality. The RealEyes device packs 11 uber-sensitive independent sensors and sports 4 ultra-high resolution 4K cameras which its developers claim “exceed 20×20 clarity vision while being worn” with “built-in X-ray and Infra-red technology enabling automated point-of-interest highlighting capabilities”. 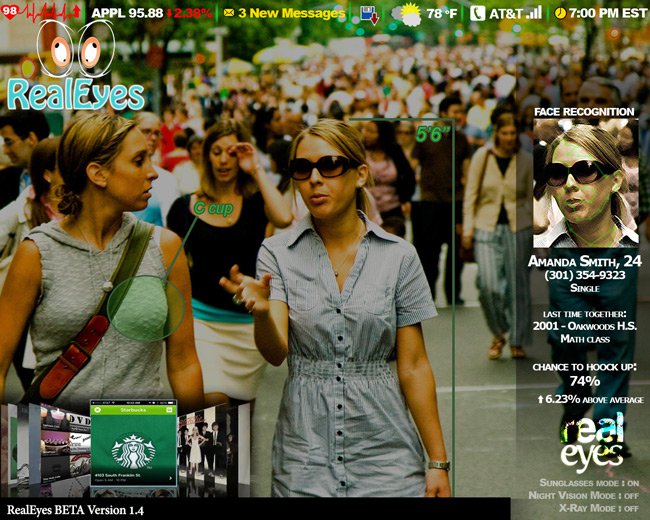 Wearing RealEyes not only relays a crystal clear representation of the real world, but in a revolutionary disruptive eye-popping world first, have managed to fuse a blistering array of sensors, cameras and nano-bots that measure all five human senses in HD quality thereby generating an even more highly defined version of reality than currently available. 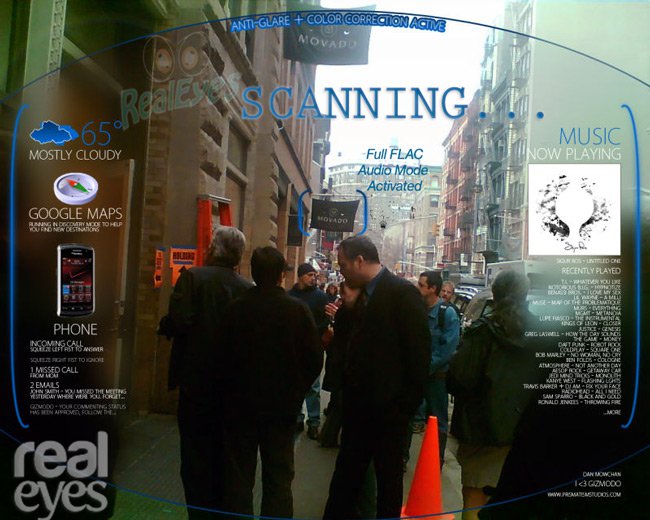 For audiophiles, RealEyes opens a portal into the audible underworld of everyday life

The five-starred engineering syndicate comprised of Apple, Panasonic, Raytheon, Intel and LG First has surmounted previously insurmountable corporate barriers and conflicts of interest entanglements that have scuppered previous cross-sector partnerships. Once created the iRealEyes entity will have an estimated market valuation of $1.416 billion, the latest unicorn to be born into today’s technology oasis.

According to iRealEyes Inc. Founder Professor Leah Karol, the entire project was steeped in secrecy to prevent leaks, “yet we still succeeded in demolishing half a dozen encrypted Chinese walls to make this product a reality”. In an interview given to frenzied reporters clamoring for more information about the RealEyes technology, she explained that the entire mission was to ensure that its top engineers developed an affordable unit that could be adopted en masse rather than hoarded for the private whims of billionaire playboys. 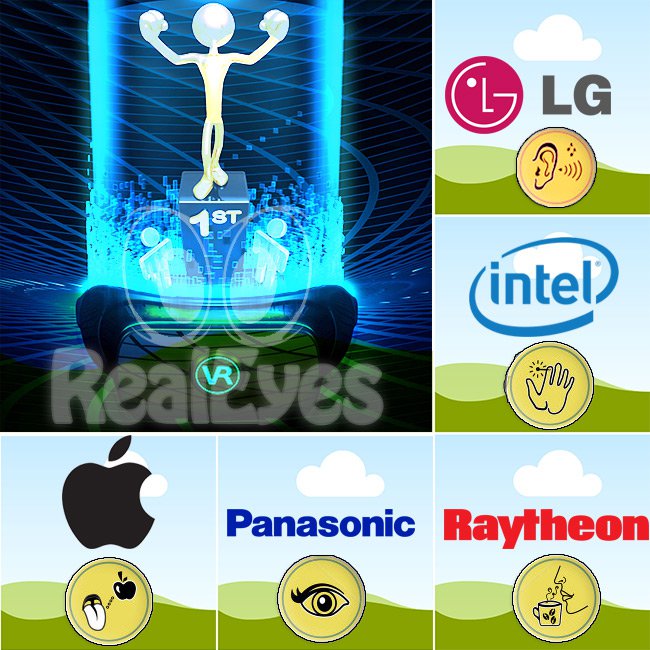 Coming together as one, Apple, Panasonic, Raytheon, Intel and LG – the first tech syndicate to breach $1 billion prior to launch.

“Each sense is accounted for in this package” exclaims RealEyes Chief of Product Research & Development (R&D) Dr. Winston Wysiwyg. “Being able to collaborate with literally the corporate world’s top minds to design this superb product from the face up has been an incredible privilege,” he added.

The RealEyes device has already passed through all the necessary FDA regulatory guidelines that are typically provisioned for medical devices within a mere 6 weeks despite requiring invasive components such as subcutaneous sensor pads, a nano spine clamp, a Wi-Fi-enabled graphene tongue stud and nasal implant ceremoniously dubbed the ‘Bogey’ by early adopters. 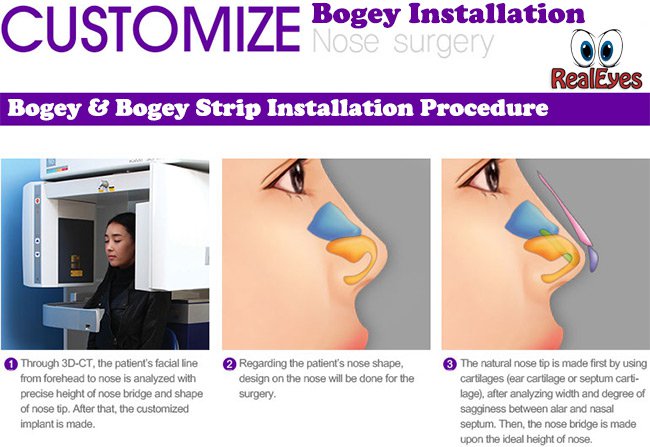 RealEyes’ Bogey add-on is a must-have for serious reality lovers.

Once implanted into the nasal cavity, the Bogey goes to work detecting odours and smells via hyper sensitive nano-sensors that pluck molecular granules directly from the air. The ‘Bogey’ links directly to the Apple-powered RealEyes core CPU via Bluetooth and can sync with mobile phones to store smells for later whiffs. The product designers have earmarked customisable components as standard across the entire ‘Bogey’ range of clips, strips and implants, so this will be one Bogey you’re encouraged to pick out for yourself, rather than leave as an afterthought.

“Pick whatever colour and size ‘Bogey’ that you need. Our patented automatic size-augmentation technology allows all our Bogeys to adapt to the environment you’re in and remain snug in your nose despite vigorous activity including sneezing” said iRealEyes Inc. spokesman Ms. Shaniqua Ninnyhammer.

The engineering quintet have assembled a team of over 40 engineers, IT specialists and scientists, as part of a larger 400-strong separate entity – a newly formed company (iRealEyes Inc.) spun-off from Apple, Panasonic, Raytheon, Intel and LG First, run by veteran IT mogul Mr. Winston Wysiwyg.

“The RealEyes device is not just a poor man’s virtual reality headset that simulates reality” said Wysiwyg. In a marketing offensive accompanying today’s announcement, Chief of Product Design & Testing at iRealEyes Inc. Dr. Lawrence Angelo said, “Having ‘RealEyes’ mounted on your face projects a fully integrated and deeply interactive reality that’s amplified in all the right places.
“With standard virtual reality (VR) headsets if you walk more than 10 feet you’ll bump into something, knock something over or could even seriously hurt yourself. Moving without seeing where you’re going is just asking for trouble. No matter what you do, your wife will probably be tearing your head and your headset off,” said Angelo.

“With RealEyes installed it really is a different world altogether. Imagine walking down the street and whilst looking at buildings, immediately being able to see how much they’re worth, when they were built and opening times all integrated.” 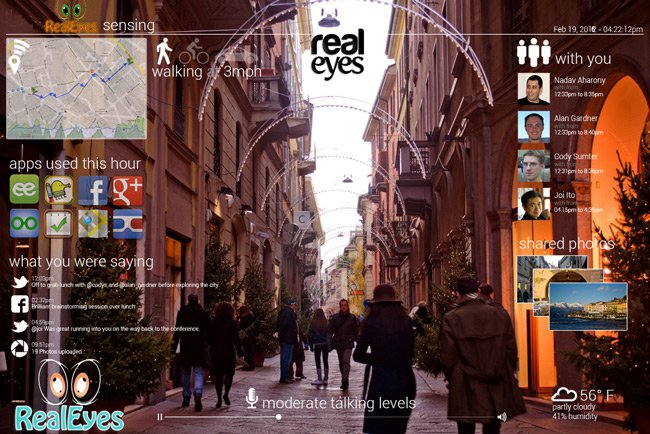 “Now imagine flicking a switch and activating a different perception nodule within the device to be able to tell what that building is made of, how it feels to the touch and even how it tastes. If you’re into that sort of thing,” he adds with a suspiciously cheeky smile.

According to iRealEyes Inc., when ‘RealEyes’ sensors come into contact with human beings is where the device enters its twilight zone territory and where its manufacturers admittedly see the most awe-inspiring potential and commercial clout.

Possessing RealEyes “allows the individual to see the emotional state of other people, measure both their physical vital signs and emotional mood,” says iRealEyes. In a trademarked world first, RealEyes is able to predict what someone else could potentially think. 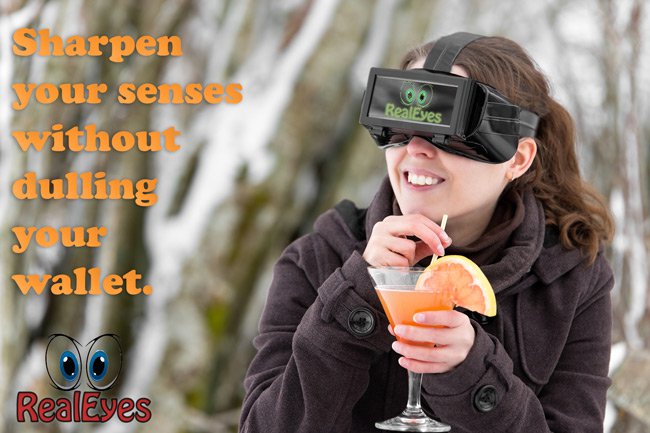 This is made possible through processing of terabytes of metadata collated in real-time from the target(s) social media content and other available digital information. The makers of RealEyes have insisted on keeping this capability a close guarded secret despite sailing through Stage 3 final product trials as part of the FDA’s Private Adjudication Panel (PAP).

In a criticism-deflecting statement, FDA spokesman Mr. Hans Andersen said, “As far as PAP is concerned this is one of the finest products we’ve ever seen. We’re an objective panel and we have unanimously decided to approve RealEyes for widespread public distribution as a priority with immediate effect”. Mr. Andersen then added, “I already have one as a legacy device from the beta testing phase and I’ll think I’ll keep it. Reality is one thing, but with RealEyes it’s a whole different story.”

The bugbear of bad news

Regardless of how much disruption or innovation digital devices deploy, criticism isn’t far behind products that push barriers.

The world needs permit-stampers, killjoys and fear mongers too.

According to RealEyes engineers (but as yet not proved under scientific conditions), one of the RealEyes premium features available only for platinum followers is the ability to read the innermost thoughts and emotions of other human beings. 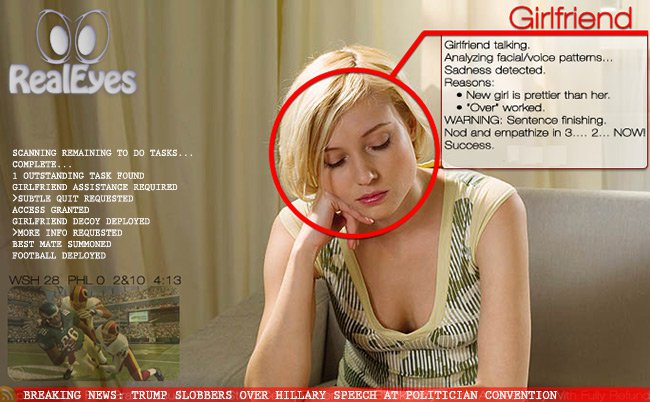 Having relationship trouble? RealEyes can integrate itself into the fabric of any dysfunctional relationship, making it functional again.

One clear point of debate already brewing on talk radio shows and prime-time TV bulletins is the danger RealEyes poses for innocent people caught in the crosshairs of criminals.

What if such technology is used to defraud rather than develop society?

“There’s nothing to worry about, it’s just a VR headset and it’s passed all the safety checks. It’s just clever tech as the manufacturers say, rather than a tech cleaver cutting a sway through society,” said US Presidential hopeful Donald Trump.

“Gimme a break; worst case scenario, we’ll conjure up some more regulatory pitfalls that undermine everybody over a 4 year period, or until the problem goes away, or the media stops covering the story. Either one works.” said Trump.

With considerable privacy concerns raised by privacy advocacy groups, but quickly dismissed by the tech quintet, questions about the RealEyes device remain as the first shipments are expected to hit store shelves early next year in time for Q1/Q2 2017.

iRealEyes Inc says that from the current prototypes manufactured, the recommended retail price for RealEyes at launch will be $1,042,016 per unit – although prices are expected to decline on the back of falling commodity prices and the expected discovery of new, previously untapped raw material hotspots globally.