There’s an ongoing discussion in Australia right now around the poor performance of a number of super funds, with APRA – the Australian Prudential Regulation Authority – indicating that several funds could be forced to merge if to do so would be in the best interest of members.

Lobby group Industry Super Australia claims the financial regulator should make greater use of its powers and push for the change, with its CEO David Whiteley telling The Australian Financial Review that APRA has this capability via a scale test that was introduced in 2012.

The success or failure of these ailing funds is not just the business of members, which is why the discussion is a heated one. With slowing birth rates, and a growing demographic of retirement aged Australians, we could be looking at a very lopsided equation of taxpayers to pension receivers in the years to come.

The last thing the situation needs is for the funds, being faithfully funnelled into by members, to provide poor returns on investments.

APRA’s deputy chairman Helen Rowell said today the body will be ‘honing in’ on the worst 25 of the nation’s 250 largest managed super funds. The association’s advisory team is currently reviewing funds on a range of performance and cost criteria that involves net cash flows, risk levels and the quality of governance as well as asset allocation.

Ms Rowell has commented in the past about super funds ruled by ‘self-interested’ boards, reemphasising the purpose of superannuation which is to benefit members looking to shore up their retirement futures.

It’s also about working in the country’s interests. As mentioned, Australia’s birth rate has been in decline for decades: 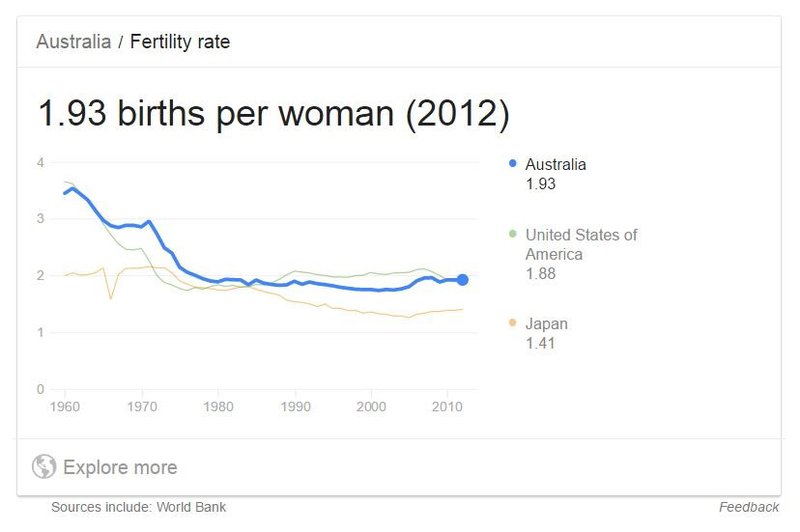 As shown in the graph above, Japan’s rates are even lower than Australia’s and the US. Interestingly, the country finds themselves in the highest debt to GDP ratio for any developed nation – and also in an aged pension crisis.

It was suggested just last month in an article in The Japan Times that as welfare costs go up, some groups are proposing a higher age for the definition of ‘elderly’. That seems a bit like the Australian government shifting the ‘poverty line’ so that it can then claim there are less impoverished people. Problem solved – or not.

As Vern Gowdie wrote late last month in The Daily Reckoning, the risk is that the “base is not going to be strong enough to support the apex”.

In other words, there’s a chance that ‘pension overpromise’ will meet a structural shortage of taxpayers to fund it.

According to APRA, there are a number of smaller super funds in Australia which are haemorrhaging money and losing members.

Consultancy Chant West estimates there are about 80 funds with less than $5 billion in the tank that could fail to meet the regulator’s scale test. That’s a lot of potential disruption.

Complete failure of a super fund is a lot more catastrophic than simply a business going bust. For members impacted, the loss is to their entire life savings. Given that the older your age, the more difficult it is to earn income, these situations are likely to cause lasting financial wounds. And accordingly, a greater reliance on the government pension.

Not only would that scenario hurt in real terms, it could also put a dangerous dent in consumer confidence in the super system – something which consecutive governments have worked hard to cultivate.

There are examples of funds considering mergers already, with Rio Tinto’s staff superannuation fund holding advanced discussions with Equip Super to create a $14bn industry fund – which could see fees reduced by 0.15 per cent. APRA’s figures put Rio’s MySuper fund at a loss of 6 per cent of its members last financial year.