Despite all the scepticism surrounding bricks and mortar retailers, the fact remains that companies in the sector have performed well over the last 12 months.

Suggesting this momentum will continue was positive retail sales data released by the Australian Bureau of Statistics, which indicated positive year-on-year momentum across most sectors continued in May.

Comments from Citi were also fairly positive with analyst Josh Williamson saying, “Retail trade increased by 0.4% in May.

“The result was better than the 0.3% consensus estimate and combined with an upwardly revised April result of 0.5% (originally reported as 0.4%) to produce a better start to the quarter than occurred in the first two months of Q1.

“Even assuming no further increase in June, the nominal Q2 result should be better than for Q1, arguing for some small pick-up in household consumption in the national accounts.”

The following provides a breakdown of the relative industry sector performances. 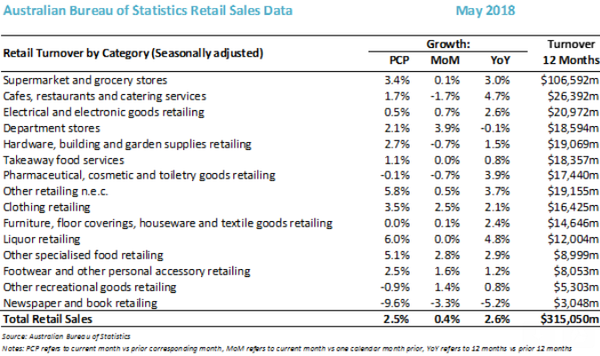 ‘Other retailing n.e.c.’ Broadly refers to retail goods sold without the use of a shopfront or physical store presence, including milk fenders, sole e-commerce retailers and direct shopping units.

While some of the strong year-on-year growth of 5.8 per cent can be attributed to e-commerce retailing, areas such as mobile food retailing, vending machines and in-home cosmetic sales for example also play a part.

Is e-commerce a two-way street

Granted, shoppers are embracing e-commerce, but the often quoted percentage growth numbers need to be put in perspective as the still immature industry is growing off an extremely low base.

That isn’t to say that e-commerce retailers are performing poorly, but suggestions that they would send bricks and mortar retailers to the wall were misleading.

Indeed, there has been some fallout in various sectors with one notable casualty being Toys “R” Us which folded in the US before being wound up in Australia.

However, Lego blocks and Barbie dolls aren’t products that you need to try on or check for comfort, durability, style, taste or size.

The other factor to bear in mind is that shoppers who trawl the net for retail items are often stimulated to buy items that wouldn’t normally have been considered, not just online, but also in-store.

So perhaps there is some upside from the advent of e-commerce shopping for bricks and mortar retailers, and the figures above certainly indicate that over-the-counter shopping is outperforming growth expectations.

Finfeed.com looks at the big picture in terms of sector performances both on a year-on-year and month-on-month comparison basis.

As well as examining the performances of individual sectors, we provide some stock ideas from each sector that may be worth considering.

Of course these are only ideas and investors should seek professional financial advice before considering any of these stocks for their portfolio.

Prior to looking at individual stocks, it would pay to reflect on the following 10 year chart which indicates a strong outperformance by the S&P/ASX 200 Consumer Discretionary Index (XDJ - yellow line) against the S&P/ASX 200 Index (XJO) over the last three years.

This indicates that stocks in the sector have already performed strongly from a share price perspective, representing a prompt for investors to also focus on valuations because it is possible that some stocks have all of the upside plus some built into their share prices. 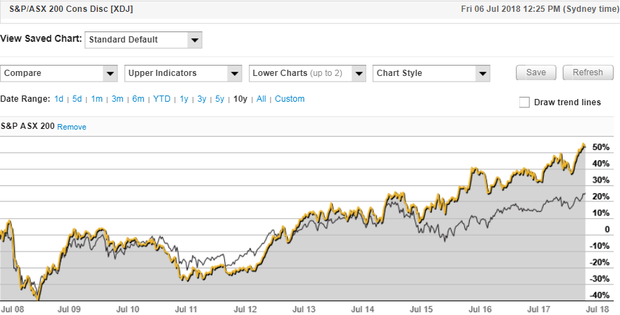 For ease of reference we will work through the sectors from top to bottom as they appear on the aforementioned table.

The only sector we haven’t examined is newspapers and books as the former falls more under the media sector and there aren’t any bookstores listed on the ASX.

Further, with sharply deteriorating growth as one of the sectors hardest hit by the transition to digital viewing, it is a sector not for the faint-hearted.

We will split this article up over a few days to give you time to digest, so let’s start with our first four sectors beginning with...

While this market segment contains few options in terms of ASX listed companies, it is home to two of Australia’s premier blue chips in Woolworths (ASX:WOW) and Wesfarmers (ASX:WES).

The latter which incorporates big names such Coles, Kmart, Bunnings Hardware and Officeworks, isn’t a pure grocery and supermarket play.

Investors who believe that Coles is the place to go for grocery exposure need to accept the fact that an investment in Wesfarmers is also an investment in the resources sector, as the group has large coal assets.

Wesfarmers is even active in the chemicals, fertilisers and energy space.

Both Wesfarmers and Woolworths have liquor businesses which have been doing much of the heavy lifting due to the underperformance of their grocery businesses. 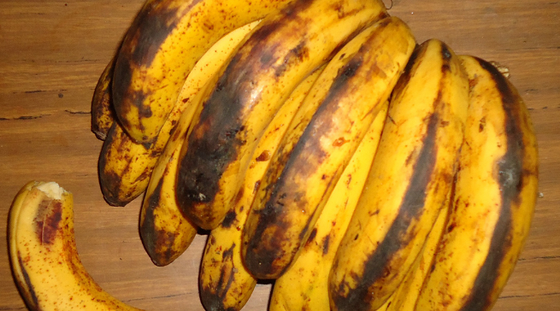 While Woolworths is more of a straight grocery play, its shares have run hard over the last three months, increasing by nearly 20 per cent, suggesting it may have run its course. The company is trading on a forward price-earnings (PE) multiple of 24 based on fiscal 2018 consensus forecasts. This appears expensive given the company is only expected to deliver compound annual earnings per share (EPS) growth of just over 10 per cent over the next two years.

The sector also carries far more uncertainty than was the case when Coles and Woolworths were a virtual duopoly and there was little control over anti-competitive strategies meaning investors should do their homework and take all publicly available information into account when making an investment decision.

Both Aldi and Costco have stolen market share, and this is likely to continue to occur as they roll out more stores.

For investors who feel that IGA offers that contrarian option, Metcash (ASX:MTS) is the company to target as its overall food retailing business which includes IGA accounts for about 60 per cent of revenues.

The remaining revenues are split equally between the company’s liquor and hardware businesses.

This is one of the strongest performing sectors, boasting year-on-year growth of 4.7 per cent, but May turnover was down 1.7 per cent on April.

Step back 12 months and Retail Food Group (ASX:RFG) would have been the go to stock in this sector given its key revenue drivers such as Michels, Gloria Jeans, Brumby’s Bakery, Donut King, Crust Gourmet Pizza and Pizza Capers.

However, the company bit off more than it could chew with many acquisitions, and with a mountain of debt it still looks too hot to handle even though its share price has fallen from circa $5.12 months ago to a recent low of 41.5 cents.

Collins Foods (ASX:CKF) could be the way to go with the company just having announced a 10.5 per cent increase in underlying earnings growth to $99.3 million in its KFC (Kentucky Fried Chicken) Australian network. 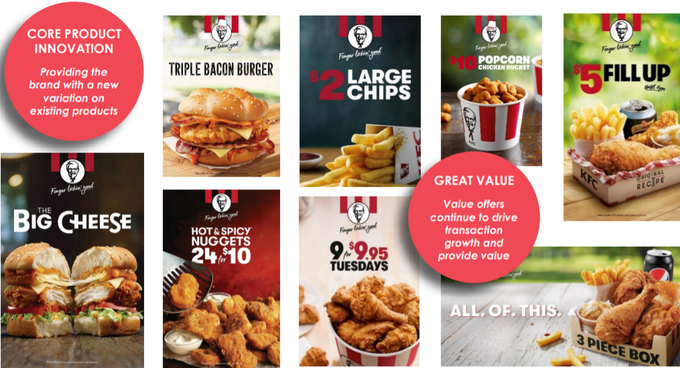 Importantly, operating cash flow increased by 23 per cent to $74.5 million.

The company has also accelerated its overseas expansion strategy, and it now has 33 KFC restaurants operating in Europe.

Underlying EPS was 33.8 cents and consensus forecasts for fiscal 2019 point to 38.9 cents, implying a forward PE multiple of 14.2, well below the industry group average of 23.9.

Domino’s Pizza Enterprises (ASX:DMP) looks far too expensive trading on a PE multiple of 34 relative to fiscal 2018 forecasts, particularly given these projections suggest an EPS growth of 13 per cent.

The key players in this sector are Harvey Norman (ASX:HVN) and JB Hi-Fi (ASX:JBH).

At various times these stocks have been market darlings, and indeed the sectors they operate in have been viewed as safe havens.

Obsolescence drives sales in many of their stock categories, in particular televisions and computer gear.

However, the sector has delivered a mediocre performance both on a year-on-year (+2.6 per cent) and month-on-month (+0.7 per cent) basis. 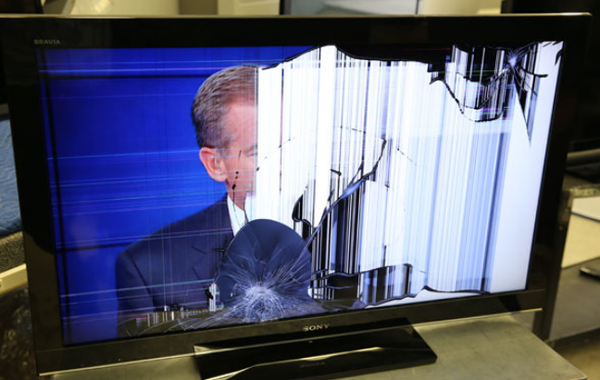 Bell Potter analyst, Sam Haddad, reaffirmed his sell recommendation in late May when JB Hi-Fi’s shares rebounded to circa $24.00 after plunging 15 per cent earlier in the month.

Broker projections and price targets are only estimates and may not be met.

Both companies are now trading close to their 12 month lows, reflecting PE’s of about 10 and sub-10 per cent growth.

Hence, neither of the companies appear to even be an attractive contrarian play, so seek professional financial advice if considering them for your portfolio.

This sector is relatively flat on a year-on-year basis but delivered strong month-on-month growth.

Perhaps higher turnover in this sector could be attributed to earlier than usual clearance sales, but it is difficult to determine.

With David Jones having been taken over, Myer Holdings (ASX:MYR) presents as the only real ‘department store’.

Given it is still to demonstrate that it has recovered from a lengthy period of poor performances and underlying inefficiencies, the company is hard to have even though it is trading close to the 10 year low of 35 cents struck in April.

It continues to present as a ‘lights are on but no one’s at home’ story. 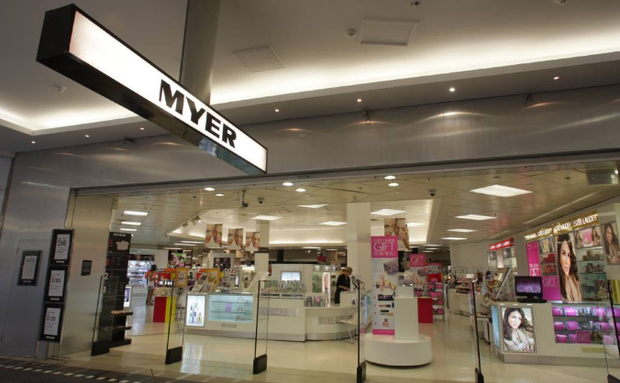 The specialty stores have demonstrated that they can better manage buying, overheads, inventories and efficiencies, resulting in much improved earnings from a qualitative and quantitative perspective.

Tomorrow we will take a look at another four sectors including Hardware and Building Supplies, Takeaway Outlets, Pharmaceutical and Cosmetics and Clothing.