Stock watch: What can we learn from the US as markets tumble?

October appears to be living up to its reputation as a volatile month on global markets after horror nights on Wall Street this week.

Marketwatch.com’s Mark Decambre noted that Wall Street’s fear index was on track for the biggest rise to start a quarter on record.

He also pointed out that the Dow’s ‘two-day tailspin’ represented one of the worst starts to a quarter since the global financial crisis in 2008-09.

The Dow plunged approximately 500 points or nearly 1.9%, and the negative sentiment rubbed off on other global markets with the FTSE 100 down 237 points or 3.2% and the German DAX falling 338 points or 2.8%.

In last night’s trading in the US only 25 stocks in the S&P 500 finished in positive territory.

In this article, Finfeed will examine the top five performers, but more importantly we will be identifying an ASX listed peer of each of those five companies that may prove to show similar resilience.

Courtesy of marketwatch.com these were the top 10.

Lennar Corp. is a residential building group, which engages in the provision of real estate related financial and investment management services. The Lennar Financial Services segment focuses on the mortgage financing, title insurance and closing services for both buyers of homes and others.

It is somewhat ironic given how badly the mortgage broking industry was hit during the global financial crisis that Lennar Corp was the best performer - didn’t they watch The Big Short!

While there are few prominent ASX-listed players to choose from that have Lennar’s diversified business model, there are some pure mortgage broker plays that are worth considering.

With a market capitalisation of approximately $480 million, Australian Finance Group (ASX:AFG) has performed strongly over the last 12 months and the group delivered an impressive fiscal 2019 result in August.

Interestingly, despite its 100 point downturn in the ASX 200, AFG finished up 2%.

Further, with an hour to go in trading yesterday it is only down less than 1%.

Though the company’s share price has been well supported in 2019, it was rebounding off a low base after being unfairly sold down as investors took a negative sentiment towards the sector on the back of the banking Royal Commission.

In February the company’s share price has increased from 84 cents to a 12 month high of $2.49, but yesterday’s close of $2.24 represented a discount to the consensus 12 month price target of $2.50, and perhaps a buying opportunity.

Hartleys analyst, Oliver Stevens has a buy recommendation on the stock with a price target of $2.47.

Based on his fiscal 2020 forecasts, the company is trading on a PE multiple of 15 with the current share price implying a yield of 5.4% based on his dividend projections.

On 12 August 2019, AFG announced it had entered into a binding conditional implementation deed to merge with Connective Group.

The combined group will create a significant national mortgage distribution network, with more than 6,575 brokers and combined mortgage settlements of $76 billion in fiscal 2019.

Management expects that the $120 million transaction will be earnings per share accretive (pre-synergies) in the first full financial year post-integration.

The company has been operating in this space for over 25 years, and it has unique placement and services expertise backed by proprietary systems and a track record of excellence of service not just in ICT, but also office support, finance and sales and marketing.

Revenue is underpinned by a long term, blue chip customer base across the government and private sectors.

The company has a history of paying strong dividends, and fiscal 2019 was no exception with the group delivering fully franked dividends totalling 8 cents per share.

Based on the current share price of $1.10, this implies a dividend of more than 7%, and on a grossed up basis taking into account franking the gross dividend yield is 10.4%.

When the company delivered its result in August it was debt free with cash of $5.9 million.

HiTech’s current share price implies a PE multiple of 14.2, seemingly conservative for a company that has outperformed most peers on a return on equity basis over the last five years.

Johnson & Johnson is a holding company, which engages in the research and development, manufacture and sale of products in the health care field. It operates across a range of market segments including Consumer, Pharmaceutical, and Medical Devices. Arguably best known for its consumer goods, the company’s products span baby care, oral care, beauty, over-the-counter pharmaceutical, women's health, and wound care markets.

One of the best performing ASX stocks this year, AVITA Medical, fits the bill nicely as a peer comparison with Johnson & Johnson.

Even though it isn’t a business to consumer stock (B2C), the company has had success in the research and development sphere, and its proprietary technology for the treatment of burns and wounds has been globally recognised.

AVITA is a regenerative medicine company focused on the development and commercialisation of innovative therapies leveraging the healing properties of a patient’s own skin.

With its novel technology platform, AVITA is advancing the standard-of-care for burn patients and is poised to address unmet medical needs across a range of dermatological indications, including vitiligo, wounds and aesthetic rejuvenation where its technology was recently recognised by an independent body as having applications in the treatment of facial acne scars. The company’s shares have increased from 8 cents at the start of the year to a 12 month high of 63 cents September, representing a gain of nearly 700%.

However, they traded as low as 52.5 cents on Thursday, with the retracement appearing to simply be a function of the broader market sell-off.

Consequently, this may be a buying opportunity for those that missed the stock on the way up.

Bell Potter analyst John Hester has a price target of 69 cents on the stock, implying share price upside of approximately 30%.

Charter Communications, Inc. is a holding company for a range of businesses. The company is a cable operator in the US and a broadband communications services company. Charter also operates in cable services segment. Since 2016, the company has been engaged in providing video, internet and voice services to approximately 26.2 million residential and business customers.

As shown below, of Berkshire Hathaway’s 45 publicly traded holdings, Charter Communications was the sixth best performer in 2019 based on total returns as at August 28. 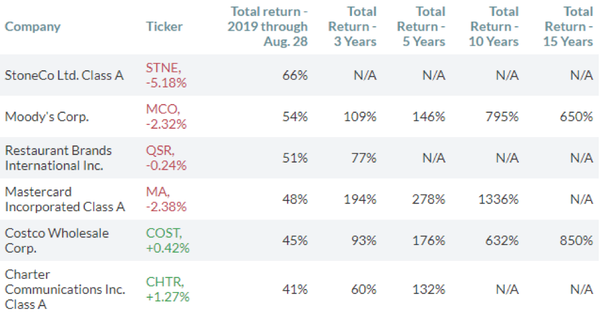 While Vonex Ltd is a mere minnow compared with Charter Communications in terms of size, the company has been punching above its weight from a growth perspective, and there are similarities in terms of strategy with the company benefiting from scale in established areas of communication while using its research and development capabilities to break into new areas.

The group also provides wholesale customers, such as internet service providers, access to the core Vonex PBX and call termination services at wholesale rates via a white label model.

The company is also developing the Oper8tor App, a multi-platform real-time voice, messaging and social media app that allows users to connect with all social media friends, followers and contacts across different social media, all consolidated into one app.

With regard to its established businesses, the company has been growing its private branch exchange (PBX) users at a rapid rate, as management outlined in the following chart after announcing that it had chalked up 32,000 users. 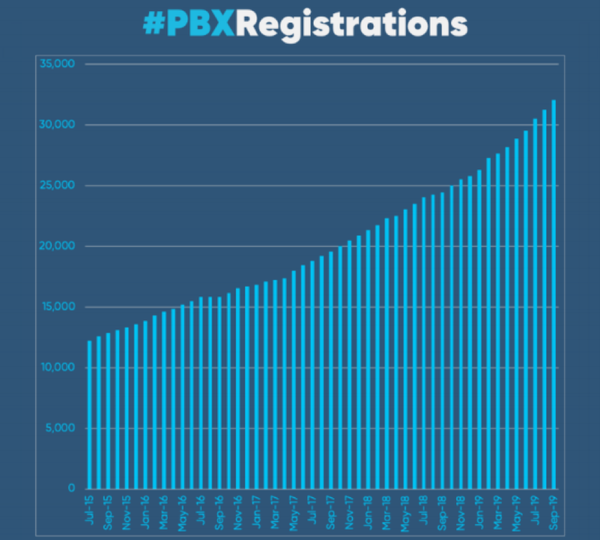 The significant growth in active PBX users has been boosted by Vonex’s increased brand awareness and its ongoing marketing campaign.

PBX registrations are a key indicator of business development progress as Vonex penetrates the multibillion-dollar Australian market for telco services to SMEs.

Vonex remains focused on accelerating sales, and management said that it is on track for a year-on-year 30% increase in new customer sales for the September quarter.

Data for this quarter should be released in the coming weeks, potentially a share price catalyst.

With the investments the company made during fiscal 2019 and through the automation of many aspects of sales ordering and management, as well as the recruitment of expert sales personnel and high-end marketing collateral, Vonex anticipates growth will accelerate throughout fiscal 2020.

Launch of the Oper8tor App will provide a new revenue stream in 2020 as well as being a platform for accelerating the company’s growth.

Having been the subject of a potential takeover by Wynn Resorts, Crown Resorts Ltd (ASX:CWN) looks to be the obvious place to go in terms of identifying a peer comparison.

However, the company is looking far too messy with the on-again/off-again takeover clouded in innuendo and now an inquiry by the New South Wales Independent Liquor and Gaming Authority there is a significant degree of uncertainty

Similar to Wynn, Star generates income from both the wagering and hospitality industries, mainly pitching its accommodation at the premium end of the market and leveraging off the prime positions of its casinos.

The company owns and operates a number of casinos, namely The Star Sydney, The Star Gold Coast and Treasury Brisbane.

Star Entertainment also acquired the Sheraton Grand Mirage on the Gold Coast in a joint venture and manages the Gold Coast Convention and Exhibition Centre on behalf of the Queensland Government.

The future looks bright for Star with the company having formed a joint venture with Chow Tai Fook Enterprises and Far East Consortium to embark on the $3 billion redevelopment of Queen Street Wharf in Brisbane which is expected to open in 2022.

The Treasury Casino will be relocated to this site.

In Sydney, plans for a new hotel and apartment tower have been announced involving an investment of up to $500 million.

This is in addition to a further $500 million of improvements and refurbishments to The Star Sydney.

Internationally acclaimed architects FJMT won a design competition for the new hotel which will be operated by one of the world’s most recognisable luxury brands, The Ritz-Carlton.

The Darling at The Star Gold Coast was completed ahead of the Gold Coast 2018 Commonwealth Games, while in a further joint venture with Chow Tai Fook and Far East Consortium, the construction of a 53-story hotel and apartment tower will commence this year.

Together, these projects and associated works will represent an investment of up to $850 million at The Star Gold Coast.

With its shares hovering in the vicinity of $4.30, the company is trading at a slight discount to the consensus 12 month price target of $4.65.