SMSFs expected to outperform in the age of COVID-19

Self managed superannuation funds (SMSFs) could avoid the full brunt of COVID-19’s impact on financial markets, thanks to higher than average exposures to cash and other low-volatility assets.

“This heavy exposure to low risk assets like cash may prove to be fruitful in the current COVID-19 climate as they may be better protected than the average not-for-profit and retail fund,” said executive director of research at Rainmaker Information, Alex Dunnin.

“Some super funds’ diversified default investment options have fallen 10-15% as a result of the current market conditions.”

Despite their potential strength in the current climate, contributions into SMSFs and small APRA funds fell by 60% over the last two years, according to research from Rainmaker Information, published in their Advantage Report.

SMSFs reached a peak of 33% of all superannuation funds under management (FUM) in 2012, though this has since dropped to 26%, which is around $750 billion.

“A higher than average exposure to cash previously dampened the returns of the average SMSF when compared to a retail or not-for-profit fund, so perhaps it also damaged their appeal.”

Interest in SMSFs has slowed in recent times, with the number of SMSFs being started each year falling almost 75% from their peak.

Simultaneously overall annual superannuation contributions have fallen from $157 billion to $130 billion, and SMSFs made up 90% of the reductions.

This number is even more significant given that SMSFs only make up 9% of all superannuation members in Australia. 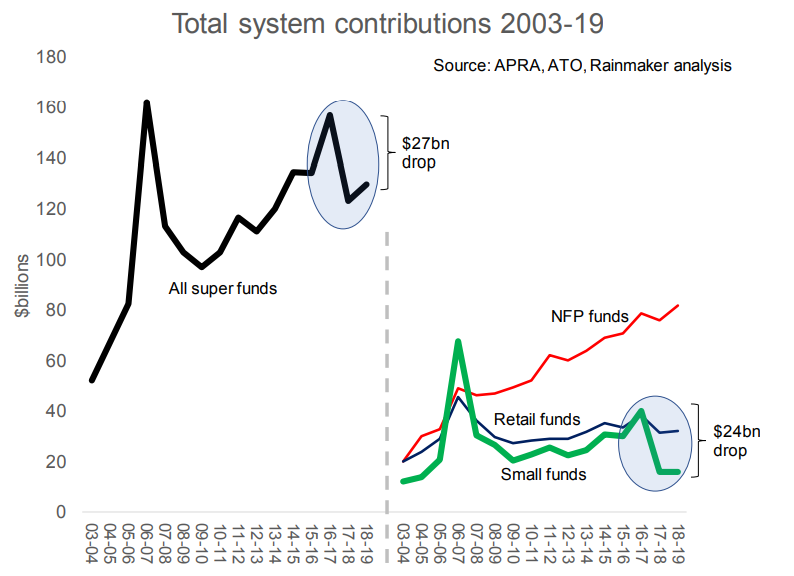 A key cause of the reduction in contributions into SMSFs appears to have been the introduction of the Transfer Balance Cap (TBC) in 2017.

Following its introduction retirees with large balances, many of whom were likely members of small funds, appear to have responded by significantly reducing their contributions.

“The drop in contributions has been so extreme that SMSFs are only marginally ahead of the retail fund segment, which fell out of favour with Australians after the global financial crisis,” Dunnin said.

Other determining factors contributing to a decline in contributions are increased regulatory scrutiny, reductions in their taxation advantages and persistent attention on the segment’s low benchmark investment returns.