Last week was a tough one for Slater & Gordon (ASX:SGH).

Shareholder value was decimated to the tune of 82% over the course of one week as news filtered through that upcoming regulatory changes in the UK would hit SGH’s core business – car accident claims. The news raised doubts that SGH’s UK operations would meet its profit forecast. 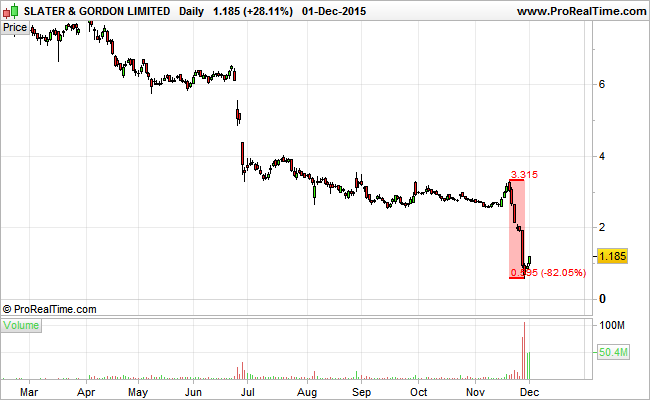 However, this week’s trading has seen SGH rebound from a low of $0.59 cents per share, up to $1.18 on the back of SGH’s rear-guard media offensive to stem its plunging share price.

SGH said it would hit its guidance for revenue of $1.15 billion and earnings before interest, depreciation, amortisation, and movements in work and progress of $250 million in 2016. The beleaguered law firm has now reaffirmed its 2016 profit guidance with Chief Executive Andrew Grech declaring SGH was not under pressure to divest assets.

SGH’s seesawing share price in recent days underscores that investor confidence is rattled, despite SGH completing a high profile acquisition of a British legal group Quindell’s professional services division earlier this year, for around $1.2 billion. Rumours of suspicious accounting practices weren’t helped after SGH admitted to finding a book-keeping error amounting to $90 million over three years back in August. At the time, its share price plunged in similar fashion to the past few days, further exacerbated by reported hedge-fund short selling.

At its annual shareholder meeting, held in Sydney on 20 November, the discussion was focused on the “perceived ills of short-sellers”, with some individual investors calling on SGH to “take legal action against hedge funds” that have shorted SGH shares and may have also manipulated its pricing. Other shareholders encouraged SGH to take steps to “prevent institutions from loaning their shares to short-sellers’ hedge funds for modest fees.”

The ongoing ASIC inquiry first initiated in June 2015, could yet reveal more skeletons at SGH, which could explain the investor stampede for the exit over the past six months.

Now at the mercy of British regulatory changes, SGH is veering away from providing guidance for the 2017 financial year.