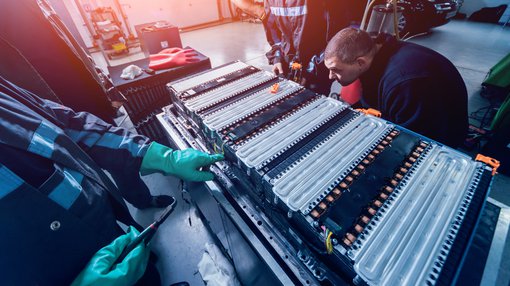 The company confirmed talks with Germany's Volkswagen for the first time, telling Reuters the pair were discussing building a factory together. It also said it was on the cusp of agreeing to build a plant in China with undisclosed partners.

The talks come as EV battery makers boost capacity to cope with fast-growing demand, as automakers race to develop vehicles powered by means other than petrol to meet increasingly stringent emissions regulations worldwide.

"Compared with rivals, we've been matching or exceeding investment in the area since last year," YS Yoon, president of SK Innovation's battery business, said in an interview. "We tried to find the right moment for massive investment."

By 2022, SK Innovation plans to spend 4.51 trillion won ($3.95 billion) to boost EV battery capacity. Last month, it broke ground on a $1.7 billion plant in the United States to primarily supply lithium-ion battery cells to Volkswagen. It is also building two factories in Hungary.

"Our strategy is to keep up with technological advancement by having relationships with some of our key customers," Yoon said, adding that "nothing has been decided" regarding a JV with Volkswagen.

Read more about Volkswagen's move into EVs: Write off lithium at your own peril

The JV would be the first in which Volkswagen, one of the world's biggest automakers, will be co-investing in battery production, similar to the joint battery investment of Panasonic and U.S. EV maker Tesla Inc, analysts said.

"We are considering an investment in a battery manufacturer in order to reinforce our electrification offensive and build up the necessary know-how," Volkswagen said in a statement to Reuters.

In March, Volkswagen Chief Executive Herbert Diess said the automaker was "taking a close look at possible participation in battery cell manufacturing facilities in Europe of our own."

"There are so many battery requirements from Volkswagen," Yoon said. "So I think it is natural for Volkswagen to have multiple suppliers even if it has joint ventures with some."

The firm broke ground in August on its first Chinese plant under a joint venture with Beijing Electronics Holding Co Ltd and BAIC Motor Corp Ltd, with investment reaching 5 billion yuan ($744.30 million) by 2020.

SK Innovation had aimed to begin construction in 2016, but postponed as EVs equipped with Korean batteries were not included on a government list of EVs eligible for subsidies.

"We hope China's market opens up in 2021" when the subsidies are phased out, Jay Rhee, SK Innovation's head of battery research and development, said in a separate interview.

Meanwhile, SK Innovation is in the industry-wide race to reduce batteries' cobalt content, with Panasonic in May saying it was working on a cobalt-free battery. The mineral is mined in harsh conditions and subject to significant price fluctuation.

The firm plans to start production of batteries containing 5 percent cobalt in 2022 from 10 percent at present, Rhee said.

Cobalt is primarily mined in the Democratic Republic of Congo, but SK Innovation is also sourcing cobalt from Australia and extracting the mineral from waste batteries, Yoon said.

"I expect we won't need to secure fresh cobalt after 2025," Yoon said.