Shares in Rhythm Biosciences Ltd (ASX:RHY) increased more than 30% on Wednesday morning from the previous day’s close of 17.5 cents to a high of 23 cents, a level it hasn’t traded at for four months.

It is also worth noting that the company’s shares have increased nearly 80% in just over a week.

Today’s surge in its share price occurred under the second-highest volumes recorded in the last 12 months, suggesting there could be some well-informed investors behind the move.

While there hasn’t been any news released by the company since early October that would account for the share price support, management has flagged that it expects to successfully complete the next phase of its key reagent development program by the end of 2018.

As pointed out by FinFeed at an earlier stage, its technology relates to the identification of antibodies crucial to developing its proprietary lead colorectal cancer blood test ColoSTAT.

Rhythm Biosciences could have a huge addressable market given the high prevalence of bowel cancer and the fact that it is developing a product that has the potential to assist in early detection, a crucial factor in beating a cancer that has demonstrated extremely positive outcomes for patients with the disease where it has been identified at an early stage. 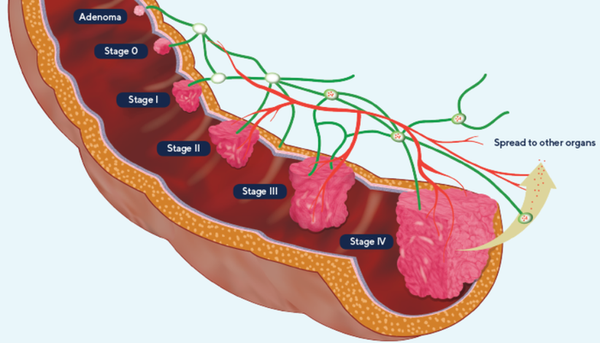 Having been granted patents in Australia, the developer of the ColoSTATTM antibody-based blood test targeting the accurate and early detection of colorectal cancer was subsequently granted a European patent.

This covers 13 jurisdictions including large markets such as the United Kingdom, France and Germany, as well as countries in the Nordic, northern European and Eastern European regions.

The company has patents pending in the US, Brazil and India, and a divisional patent application pending in China.

The granting of patents in large markets such as the US and China would be a market moving event for the group, and perhaps there is growing confidence that this will occur in the near term.

Alternatively, investors could be banking on the imminent completion of the next phase of the reagent development program.

Is this part of a broader sector rally?

It was only last week that FinFeed highlighted the recent accelerated interest in biotech stocks.

One of the particularly strong performers in recent weeks has been biopharmaceutical drug discovery and development company, Antisense Therapeutics (ASX:ANP).

The company has two drug candidates, ATL1102 and ATL1103, which it has been studying in clinical trials for use in three diseases: Duchenne Muscular Dystrophy (DMD), Multiple Sclerosis (MS) (ATL1102) and acromegaly (ATL1103).

Antisense is currently conducting a Phase II clinical trial with its flagship drug to treat DMD at the Royal Children’s Hospital (RCH) in Melbourne. The company, and seemingly shareholders, are optimistic as this treatment is the same drug previously used by ANP in successful Phase II trials in MS patients.

When FinFeed highlighted Antisense as one of the high performing stocks in a rampaging sector its shares were up 217% on the day, closing at 5.4 cents.

The rally continued with the company trading as high as 9.4 cents in the following days.

As indicated last week, clinical stage oncology group Prescient was up 18% in early morning trading, but there was plenty more to come.

The company’s shares traded as high as 10.5 cents on Wednesday morning, representing a gain of nearly 50% since we featured the stock.

Suda Pharmaceuticals has also pushed higher after increasing 88% to 7.5 cents when featured.

The company stacked on another 40% in the ensuing days, hitting a four month high of 1.1 cents.

This clearly demonstrates that some big gains can be made by looking outside majors such as CSL (ASX:CSL), Cochlear (ASX:COH) and ResMed (ASX:RMD).

Interestingly, these blue chips have dragged the S&P/ASX 200 Health Care Index lower in October with it falling from about 31,500 points to 28,500 points.

The relative performances of these stocks against the broader index over the last three months can be seen below. 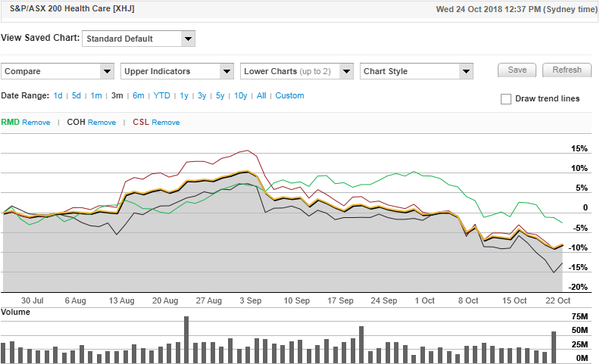 Indeed, CSL and Cochlear were both trading above $220.00 in September, and they are now struggling around the $180.00 mark.

There certainly appears to be benefits from throwing the net a little wider when seeking value.