Retirees across the nation are shaking their fists at Telstra (ASX: TLS) management today. Its longstanding position as retirement-portfolio staple is in doubt after management this morning announced it would cut its dividend payout ratio.

The shock announcement follows the telco raising or maintaining its dividend every year since 2007.

The decision to cut the dividend came as the company announced a 32.7% fall in full year after tax profit. Profit for the year came in at $3.9 billion, which was more or less in line with expectations. Yet, that figure was way down from last year’s $5.8 billion profit.

A dividend of 15.5 cents will be paid on 28 September, with the company trading ex-dividend on 30 August, taking the full year dividend to 31 cents, fully franked. This is consistent with last year’s payout, but was lower than consensus estimates.

The lower dividend payout ratio will take effect next year. From 2018, TLS will target a reduced payout ratio of between 70% and 90% of underlying earnings, plus one-off NBN related payments.

Below is TLS’s existing and future dividend policies: 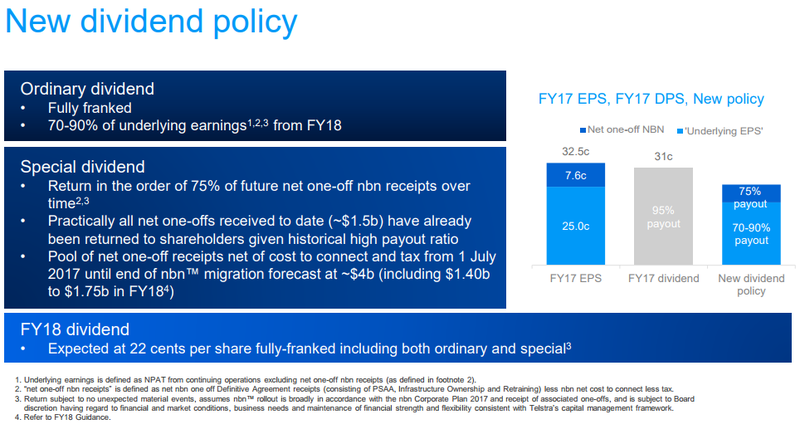 Adding to the pain for shareholders, the share price dropped by more than 10% this morning and is trading at below $4 per share for the first time in five years.

Historical data in terms of earnings performance and/or share trading patterns should not be used as the basis for an investment as they may or may not be replicated. Those considering this stock should seek independent financial advice.

Telstra CEO Andrew Penn remained optimistic despite the fall in profit. At the same time, he noted the highly competitive and dynamic market, with new entrants in both mobile and fixed businesses, as well as pricing pressure in all sectors through price reductions, value enhancements and increased data allowances.

Penn explained, “It is against the backdrop of these market dynamics that we announced during the year our intention to invest up to $3 billion over the next three years to achieve a further step change in our strategic positioning to deliver economic benefits of more than $500 million of EBITDA by 2021.”