On September 5, Finfeed suggested the 15 percent retracement in Resolute Mining’s (ASX: RSG) share price from $2.10 to $1.87 represented a buying opportunity.

At that stage we saw several catalysts that could push the company’s shares higher, in particular its inclusion in the S&P/ASX 200 on September 16. Another factor in the pipeline was the feasibility study being conducted at the company’s Ravenswood project in Queensland.

Following completion it was announced yesterday that rather than being an asset in wind down mode, Ravenswood was now poised to become an asset capable of delivering annualised production of 120,000 ounces of gold over a mine life of 13 years with all in sustaining costs (AISC) of AUD$1166.

This is yet to occur, of course, and those looking at this stock for their portfolio, should still seek professional financial advice for further information.

While this places Ravenswood at the upper end of the cost curve, it is a volumes story and as pointed out by Duncan Hughes from Somers and Partners there are other similar low-grade profitable projects such as Evolution Mining’s Mt Rawdon operations and Regis Resources’ North Duketon project. 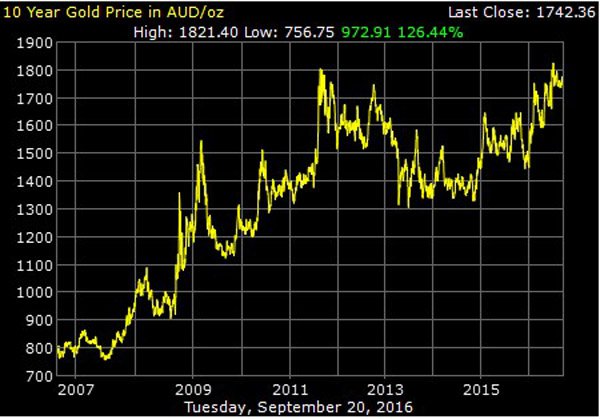 As can be seen in the chart above, one has to go back to pre-2008 to find a period when the Australian dollar gold price traded below RSG’s breakeven point for its Ravenswood project. 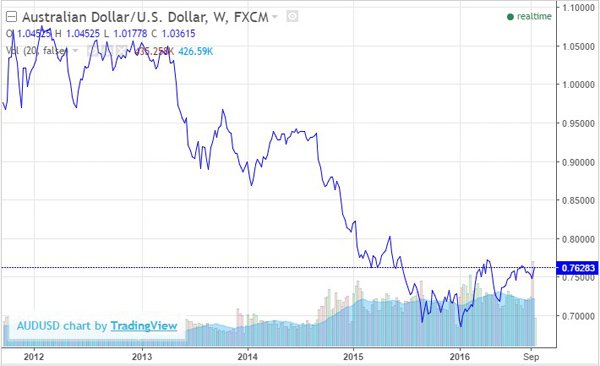 The start-up costs for Ravenswood is estimated at $134 million with life of mine major project capital standing at $258 million, representing a moderate outlay for a long life project that will generate significant cash, effectively instrumental in funding the development of RSG’s Syama and Bibiani projects in Africa.

Reflecting on our call a few weeks ago that RSG would spike on the day of its inclusion in the ASX 200, we were on the mark as it hit an intraday high of $2.17 with nearly 100 million shares traded.

This represents the highest number of shares ever traded in the stock, and given that it went on to hit a high of $2.25 on Tuesday, not too far shy of its pre-GFC high of $2.51, it could be technical resistance that provides the next hurdle.

That said, Somers increased his price target from $2.04 to $2.17 and maintained a hold recommendation, noting that the feasibility study reported lower costs, lower capital expenditure and better head grades than expected.

The other potential catalyst for RSG is obviously the gold price. On this note, Somers’ valuation relative to a US$1400 gold price increases from $2.17 to $2.51.

However, previous trading trends are not indicative of future share price performance and they should not be used as a basis for investment. It should also be noted that broker projections are estimates that may or may not be met and independent advice should be sought before investing in ADA.

Consequently, while it wouldn’t be surprising to see support for RSG remain intact around current levels, medium-term upside momentum could emerge as it increases production at Syama and brings the Bibiani project into production.