Bubs Australia (ASX:BUB) has severely disappointed investors after delivering a poor result for fiscal 2017. As management announced its net loss (before tax) of $1.3 million in fiscal 2016 had blown out to more than $5 million in 2017, BUB’s shares plunged to a low of 45 cents after trading as high as 96.5 cents a week prior.

While a recent placement at 45 cents raised approximately $16 million, the raising is highly earnings per share dilutive. Further, the company operates in very challenging markets and the business model remains questionable.

The company develops, markets and sells premium infant nutrition products in domestic and international markets with sales into China central to its success. As demonstrated in the last 12 months, doing business in China presents its challenges, with regulatory bodies moving the goal posts as they see fit.

While not related, its namesake — Bubs Baby Shops, which has approximately eight stores in Queensland and NSW — entered voluntary administration in late August. The company then conducted a fire sale, resulting in a flood of products such as prams and cots hitting the market at heavily discounted prices.

In the short term, this has the potential to place a drag on the sales of Baby Bunting Group (ASX:BBN), Australia’s largest specialty retailer of baby goods. 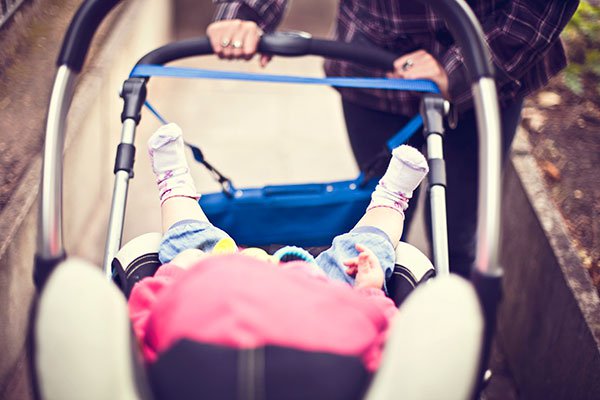 BBN’s principal product categories include prams, cots and nursery furniture, car seat safety, toys and babywear. The company delivered a strong result in fiscal 2017 with sales up 17.4 per cent, and a net profit of $12.2 million representing a year-on-year increase of 47 per cent.

Of course, success is not guaranteed – consider your own personal circumstances before investing, and seek professional financial advice.

Following the demise of Bubs Baby Shops, Morgans CIMB ran the ruler across BBN, noting both the likelihood of short-term sales pressure from Bubs’ heavily discounted sell off, as well as the average annual earnings per share growth of 16 per cent in 2019-2020.

Its fiscal 2018 forecasts look impressive despite the current sector woes. Morgans is forecasting net profit to increase to $14.4 million in 2018, representing earnings per share of 11.4 cents.

While this implies a PE multiple of 16, it could be argued that BNB’s forward multiple should be based on its fiscal 2019 outlook following recent peer discounting and growth related to its store rollout strategy.

Management proved it can deliver growth well in excess of Morgans forecasts in 2016 and 2017, with scope for outperformance in fiscal 2019. However, based on the broker’s current forecasts, the company is trading on a PE multiple of 13.5 relative to fiscal 2019 projections. 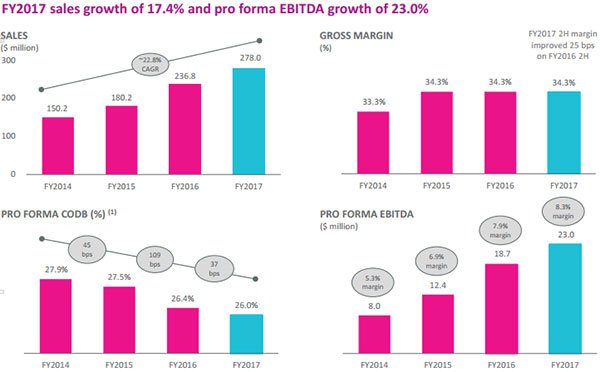 The contraction in consumer spending on non-discretionary items has been well documented, with the impact being particularly evident as companies delivered their fiscal 2017 results recently. 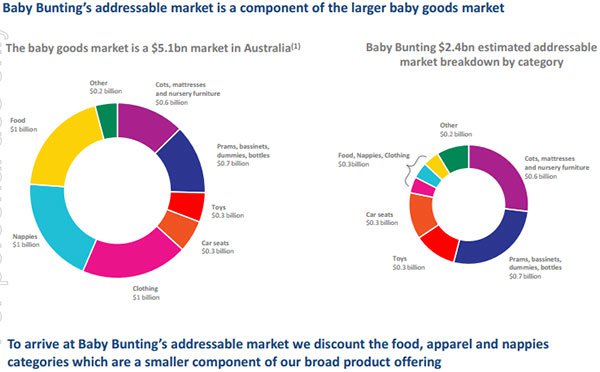 It is important to gain an understanding of the potential impact of depressed consumer spending in relation to BBN’s business. Another factor which may have placed a drag on BBN’s share price is the bankruptcy of major international retailer Toys “R” Us in September. The company reportedly owes large sums to some major toy manufacturers in Mattel, Hasbro, Lego and Crayola.

It’s not the size of a company that counts, but the nature of the products it manufactures. While Baby Bunting’s sales are unlikely to be hampered by an escalation in online purchasing, it is the likes of Toys “R” Us that get cut out of the supply chain.

Whether BBN’s investment profile is susceptible to the same trends comes back to product knowledge and common sense.

Lego is a well-understood product which can easily be identified on a computer screen, and the same goes for Crayola’s drawing materials. 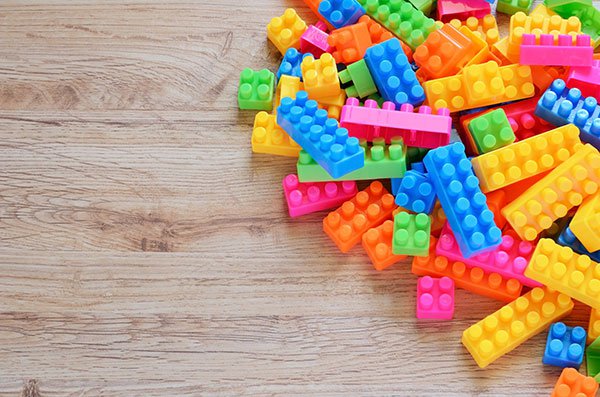 Much easier than a pram to buy online

Mattel’s toys, dolls, action figures and games are just as easily identified. A further factor working in favour of these companies is that most of their products are easily transportable.

The same can’t be said for the likes of prams, children’s car seats, cots and high chairs. Not only are these far more difficult to transport, but product variations — in terms of safety, size and extra features — aren’t necessarily clear when buying online. A pram is an obvious example of an experience that lends itself more to in-store shopping.

From a safety perspective, these items have stringent regulations, and product safety standards enforced by the ACCC. It is illegal to sell products to consumers in Australia that do not meet these standards. 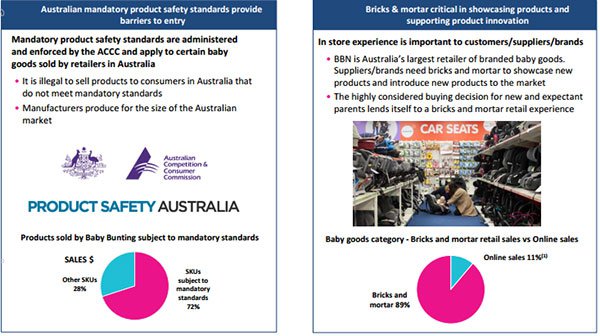 Approximately 60 per cent of BBN’s top 250 selling products are subject to Australian safety standards, with 80 per cent of the 250 not available outside Australia.

Shift into development of own online portal

The company’s online portal has continued to generate strong growth with a 76 per cent increase in sales in fiscal 2017. However, reinforcing the nature of BBN’s product mix, this represents only 6.4% of group sales.

BBN has also launched Baby Bunting branded goods on eBay. This took effect in June 2017, and has the potential to provide earnings support in fiscal 2018.

The company has created an extra layer of insulation against online competitors by introducing services in-store such as car seat fitting and in-store device demonstrations. It has also tailored the shopping experience by providing locations with ample car parking, as well as feeding and parent rooms. 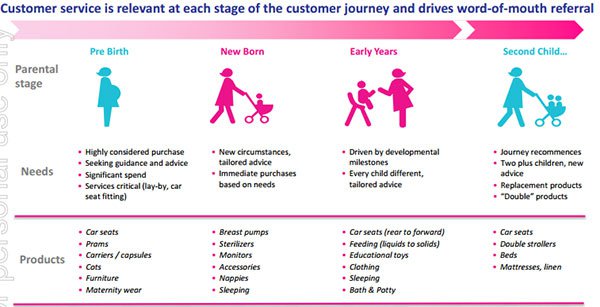 A key growth driver in coming years will be the company’s store rollout program which should see the number of stores approximately double from the current total of 43.

Five to eight stores are planned for fiscal 2018, including two or three regional stores. Evaluating demographic dynamics, locations and competition, the company has established a network plan of more than 80 trade catchments.

Importantly, 46 per cent of BBN stores have been established for less than three years, indicating that returns are yet to hit their peak. Combined with the rollout of new stores, there is certainly scope for growth.