Rate cut welcome, but no panacea for economic woes

The Reserve Bank has cut its official interest rate by 0.25 percentage points to an all-time record low of 1.25%, in line with analyst’s expectations.

Survey group, Refinitiv had earlier noted that all of the 43 economists it had surveyed had tipped a rate cut in June and there is also an expectation by 80% of those surveyed that another cut will occur in October.

In what has been a lengthy period of stable rates, this is the first change in nearly 3 years.

However, pressure has been mounting for some time on the RBA to create some economic stimulus in the face of falling house prices, weak retail sales, a decline in housing construction activity and constrained wage growth, leading to a contraction in disposable income.

With most of these factors impacting upon each other and exacerbating the problem it is difficult to break the cycle, and that is the conundrum facing both the government and regulatory bodies.

There were further ominous signs for the retail sector when April data was released on the same day the long-awaited rate cut arrived.

The following charts show the steep decline in moving annual turnover (MAT) growth since 2015 with total retail sales (red line) growing at an underwhelming rate of about 3% over a 10 year period, a worrying sign.

Even more concerning is the fact that the growth rate slips to approximately 2% once the resilient non-discretionary spending items such as food and alcohol are stripped out.

It isn’t unusual for consumers to rein in the spending ahead of an election as it is a period that produces uncertainty.

However, there is a strong chance that this could reverse in May, particularly now that the RBA has delivered the rate cut.

In fact, there is the potential for a significant month-on-month boost off the low base implied by April figures.

However, that will count for little as it is the long-term trend that is a worry, and dips and darts off a relatively stagnant baseline are fairly insignificant at this point in time.

That said, looking at pockets across the retail sector, one of the more unexpected positives was the month-on-month growth of 1.8% generated by the department store sub-sector.

However, this could point to disturbing news when annual results are rolled out in a few months’ time as the out of sync performance could well have been driven by heavy discounting, a factor that will reflect poorly in margins and profitability.

Stay-at-home stocks could be the safe play

The best performing sector was recreational goods with a gain of 2.8%.

The sector could be receiving support from macro factors such as, ironically, constrained consumer spending, as well as the weakening Australian dollar.

Overseas holidays are being put on the back burner because of the high headline costs and the low buying power of the Australian dollar in overseas destinations.

Consequently, there would appear to be a shift towards the ‘holiday at home’ option as well as day-to-day activities that are less of a drain on the pocket.

That could well account for Super Retail Group’s (ASX:SUL) recent share price strength with its range of sporting and recreational stores likely to be beneficiaries of such a trend.

In particular, the group’s BCF (boating camping and fishing) and Rebel sports and recreational equipment stores could perform well in such an environment.

SUL’s shares have increased from about $7.50 to $9.30 in the last month, and the emergence of the CBA in mid-May as a substantial shareholder is a positive sign.

How have the banks responded

The ANZ was first off the blocks yesterday after the RBA announced its rate cut with the group stating that it would reduce rates by only 0.18 percentage points, or roughly 70% of the RBA cut.

Westpac has also disappointed its customers, committing to a rate reduction of 0.20 percentage points.

The CBA and NAB will pass on the full rate cut.

However, it should be remembered that the banks have been running their own race for the last 12 months with the CBA for example increasing its variable home loan rate by 0.15 basis points as recently as October 2018.

Consequently, it could be argued that they had some slack to play with.

The NAB increased its owner occupiers paying principal and interest rate by 0.12 percentage points in January this year, taking it to 5.36% per annum.

However, a changing landscape always creates opportunities, and it would be an ideal time for homeowners to shop their loan around, particularly given that the weight of opinion suggests anything above 4% is too high.

Indeed, research house Canstar recently noted that there was a 2.86% difference between the lowest and highest home loan comparison rates.

Interest rate cuts have dominated lenders’ movements as 2019 has unfolded, offsetting some of the tactical manoeuvring that occurred in the latter half of 2018.

The lenders recognised as offering outstanding value to customers in the Home Loan Star Ratings are listed below.

This award goes to home loan lenders that provided outstanding value products to owner-occupiers across variable and fixed-rate loan terms considered in these ratings.

Home loans were assessed across four loan amounts ranging from $200,000 up to $750,000, for borrowers making principal and interest repayments.

Canstar Research found owner-occupiers with a 5-Star home loan had access to lower interest rates compared to the market average, as displayed in the table below. 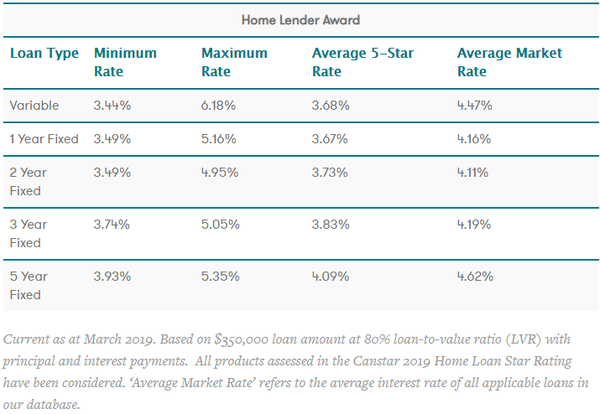 HIA calls for banks to move in step with RBA

With movements in the cash rate so closely aligned with the housing industry it is only fitting that Housing Industry Australia (HIA) Chief Economist, Tim Reardon gets the last say.

While he said that the rate decision combined with the re-elected government’s retention of current capital gains tax arrangements will go a long way to supporting confidence in the housing market, the banks need to move in step with the RBA.

Though he acknowledged that an easing of interest rates is necessary in light of the slow rate of economic growth Reardon made the point that on their own, a cut to interest rates will not be sufficient to stop the downturn in building activity.

It is worth noting that building activity has always been closely aligned with economic prosperity and consumer confidence, as from an overall perspective it is one of Australia’s largest employers.

Look at the data in the following two charts and you will see that the marked uptick in consumer sentiment between 2008 and 2017 aligns closely with private residential building approvals. 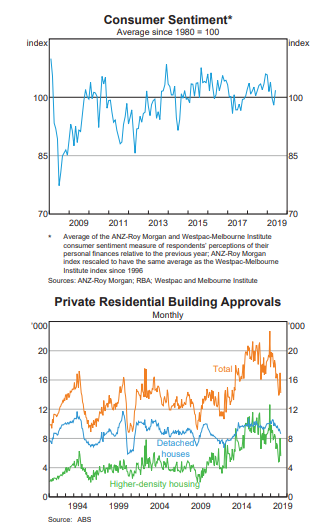 From every facet of house construction to the manufacturing and distribution of appliances and fittings and right through to furniture and hardware stores, garden supplies and retailers of electrical goods, a buoyant housing market creates employment opportunities.

However, getting back to addressing the issue, Reardon said, it isn’t just about rate cuts.

And he is right - the rot set in during the Royal Commission, and was exacerbated when the Australian Prudential Regulation Authority (APRA) imposed regulatory changes on a banking system that has traditionally been considered worldwide to be one of the best government-guided, but self-regulated financial industries.

Our banking system remained robust when the big US banks went to the wall during the GFC, and Reardon is on the money in his criticisms of APRA.

“The credit squeeze gathered momentum throughout 2018 and accelerated the downturn in building activity. This will continue to impact the level of home building and the wider economy until these lending restrictions are eased.

“The amount of money that banks are prepared to lend households has been slashed by around 15 per cent over the past year.

“APRA’s regulatory restrictions and increasingly conservative lending practices by banks are the cause of the credit squeeze.

“The impacts of these restrictions are now being seen in the wider economy. Households have clearly tightened their belts in light of falling house prices which have been exacerbated by the tight credit limits.

“If banks do not pass on the full rate cut they will have magnified the impact of APRA’s rule changes and stifled the ability of the RBA to use monetary policy to rectify the damage caused by the credit squeeze.

Reardon also said there is a need for federal income tax cuts, the first home loan deposit scheme and public infrastructure investments to assist in stimulating employment growth and assisting in driving the residential building industry out of the downturn.