Protecting your investments in a bear market


Equities markets in the US and Australia kicked off the year strongly, building on substantial gains delivered in 2019.

This is well above the average yearly returns, and it is difficult to see the index replicating this performance in 2020.

Market commentators recently pointed out that Australian blue chips were the most expensive by valuation on a global comparative basis.

With a slowing economy, stagnant wage growth and little room for stimulus in relation to lowering the cash rate which is already at an all-time low it is difficult to mount an argument that our stock market is a reflection of a robust economic environment.

For the best part, we have run on the coattails of strong US equities markets, but with geopolitical issues weighing on global markets, the Dow may take a breather after a stellar run since President Trump took office.

In an almost uninterrupted four-year run the Dow Jones index (DJI) has increased from about 15,660 points to a recent all-time high of 29,373 points, a gain of nearly 90%. 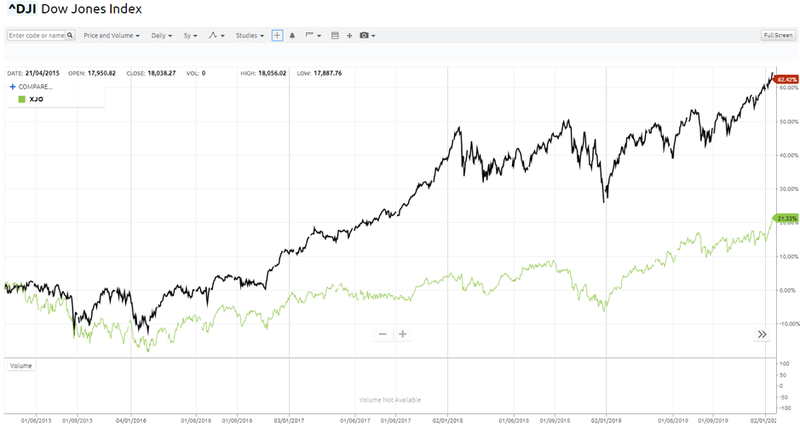 However, the period to focus on with regard to the latter is 2019 when there was a marked acceleration in the XJO, one could argue for no apparent reason.

It has been a stellar period for retail investors and fund managers alike.

But one of the most important challenges now is to protect those gains in a very unpredictable market.

The average Australian worker has substantially more funds tied up in superannuation and/or self-managed superannuation funds than they do in bank accounts.

However, as was the case during the global financial crisis, one bad year can offset several years of gains.

We may just be at that inflection point now where we need to lock in the gains that have been made in recent years and/or alleviate the negative impact that a market correction could have.

While the ‘if and the when’ of a market correction is impossible to predict, it could be argued that there isn’t a need to know the exact timing.

However, I believe we will see a substantial downturn in 2020, and definitely the continued performances of prior years’ seem impossible given the fairly underwhelming economic data referred to earlier.

Throw into the mix the fact that consumer and business confidence is flagging, and it isn’t hard to see a significant correction if fundamentals replace hype as a market driver.

It’s over before you know it

Severe market corrections normally happen in the space of days or possibly weeks, making it extremely difficult to salvage losses after the event.

As indicated below, the bulk of the damage from the global financial crisis was confined to a couple of weeks of October when the Dow plunged from about 10,800 points to 8100 points, a fall of 25%.

So if you’re an Australian equities investor, the same scenario could very well see your portfolio lose all of its 2019 gains plus some in a couple of weeks.

Similarly, your super fund that delivered say a 15% gain in 2019 could be eroded away by a similar proportion or more in 2020.

Assuming my pessimistic view of the market is correct, the question is how does one deal with the consequences.

Given the unpredictable nature of share market corrections and the extent to which they can swing quickly, much of it is about being prepared.

With regard to self-managed superannuation funds investors could start to trim their holdings.

Most superannuation funds have a wide range of investment options including cash, property and infrastructure, as well as Australian and overseas shares.

There is much greater flexibility today than there was in the past to tweak your exposure.

Normally, it only takes about 48 hours for changes to take effect, but as we mentioned, much can happen in the space of a couple of days.

Given my view of market conditions at the moment I have chosen to move to cash, knowing that when value re-emerges I can just as quickly shift back into equities.

However, I believe there is one very useful strategy that can be used regardless of market exposure.

Using ETFs to ‘short’ the market

There are ASX listed exchange traded funds (ETF) that focus solely on providing investors with an inverse relationship to market trends.

Theoretically, if the market falls 1% your ETF investment should increase roughly 1%.

Three such funds are operated by BetaShares.

As you can imagine, in recent years these ETFs have performed poorly and this is indicated in the following five-year chart which shows the ASX All Ordinaries and the Dow in green and purple respectively. 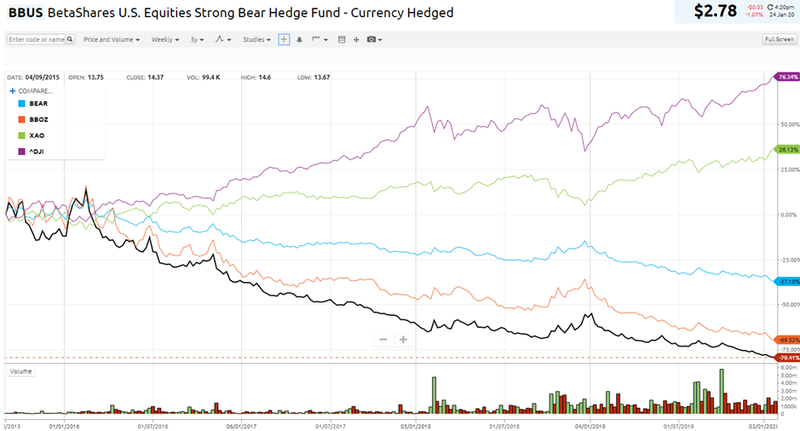 The blue line represents the BEAR Fund, while the orange and black lines represent the BBOZ and the BBUS respectively.

Being able to view the performance over a five-year period is useful as it gives you a better idea of true trends.

As indicated, the BEAR is less volatile, and it is worth noting that unlike the BBUS doesn’t also involved currency hedging which is another moving part that arguably makes this process even more challenging.

The BBOZ is structured in such a way that a 1% fall in the Australian share market on a given day can generally be expected to deliver a 2.0% to 2.75% increase in the value of the Fund and vice versa.

So if you are bullish on your bear market opinion that may be the place to park your money.

However, during periods of volatility I don’t necessarily look for extremes, rather something to level the playing field.

I have a preference for the BEAR where a 1% fall in the Australian sharemarket is anticipated to deliver a gain in value in a range between 0.9% and 1.1%.

It is worth looking at the performance of this fund over the last five years, but also note the performance in the month of December 2019 just to get a feel for the return it can provide in a bear market. 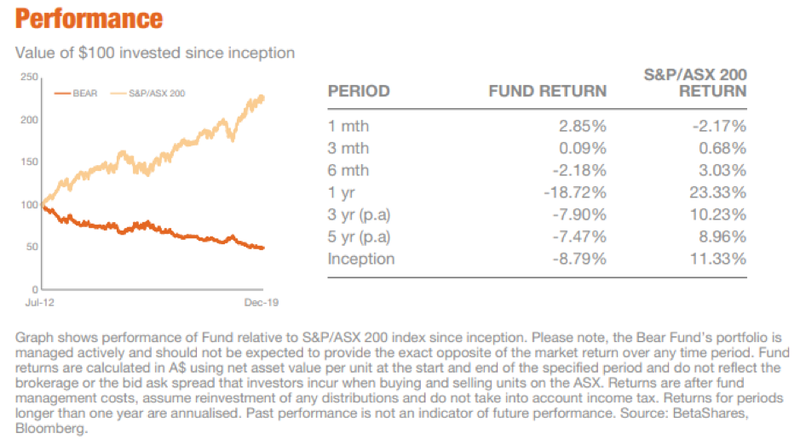 The DIY’s solution to shorting

For investors who can’t get their head around shorting stocks and/or having to cope with fees on a per transaction basis, this may be a useful way of achieving the same ends.

The BEAR levies a 1.19% per annum management fee, but it also makes annual distributions depending on performance.

The other benefit is that it covers a wide range of stocks rather than the investor running the risk of picking the wrong stocks to short.

While the chart on the left looks less than compelling, it is because the fund did exactly as it said it does - you would be worried if it was going in an upward direction.

But definitely, one needs to ask the question whether that 2.85% return for December is the tip of the iceberg, potentially providing the ideal timing for contrarian investors.

Just as a final takeaway, yesterday’s trading patterns as indicated below were interesting with BEAR finishing up 1.5% (up 2.4% at one stage) on the back of a 1.3% decline in the XJO.