Progress made on gender equality – but it depends where you look

Australian listed companies are making great strides with regard to gender diversity – but only the most visible companies appear to be joining the party in a meaningful way.

The Australian Institute of Company Directors (AICD) recently released a quarterly report into how ASX boards were performing with bringing more women into the boardroom.

The report found there has been a great deal of progress in just a few short years on the issue.

Yet, if you start to look beyond the bigger companies there are worrying signs. Data supplied to Finfeed indicates that the smaller the company – the less likely it is to appoint female directors. 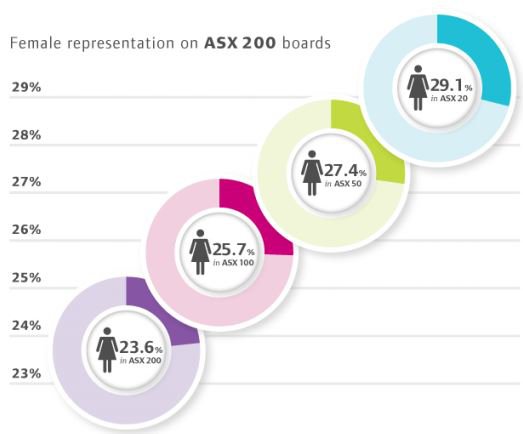 When you come to the ASX300 and the All Ords, the percentages are just 21% and 18% respectively – meaning there are actually fewer women again, dragging down the whole average.

AICD general manager of advocacy Louise Petschler told Finfeed that the organisation hadn’t looked too hard at the landscape outside the ASX200, but the trend was worrying.

“I think it may be true that the importance of gender diversity and the benefits of having a diverse board for governance processes overall has been an evolving conversation and it’s probably more top of mind for those entities that are particularly in the spotlight,” Petschler said.

“If you’re a larger more high profile company on the ASX it means you’re going to get much more focus and attention on reporting those results and indeed going through and measuring that brings the issue more top of mind.”

Not that Petschler thinks the progress made by ASX200 companies is all about optics for the larger companies, but the focus on the issue from press (Finfeed included) has helped the issue.

“I think this time around there has been a real focus on companies who don’t have any women on their boards,” Petschler said.

“That kind of attention and focus will create a dynamic of its own, or at least encourage the question to be asked not only by the board of ASX200 companies.”

In 2012 the Australian Securities Exchange Corporate Governance Council (ASECGC) introduced recommendations around diversity, and has been looking at the issue ever since.

The ASECGC thinks about the issue like this in the latest edition of its Corporate Governance Principles and Recommendations.

This third edition report discusses the role of a nomination committee in selecting appropriate directors for a company, and it doesn’t think about board diversity along gender politics lines.

“The nomination committee should be of sufficient size and independence to discharge its mandate effectively. Consideration should also be given to ensuring that it has an appropriate diversity of membership to avoid entrenching unconscious bias,” it says.

That last sentence is the increasing focus of the campaign to achieve something approaching equality on boards.

AICD has a target of 30% representation for women on boards on the ASX200 by 2018 – something Petschler says is something of a “tipping point”.

Percentage of female directorships (at May 31 2016 source AICD)

She does concede, however, that it will take a while longer for companies on the smaller end of the scale to get to the same point – although she “sees no excuses” for ASX300 not hitting the same mark.

There are likely two issues affecting the ability of smaller companies on the exchange from making the same progress as their larger cousins.

The first is that there isn’t the same spotlight or pressure on them to change their ways than there is for larger companies.

The reason AICD and others tend to focus on the ASX200 up is simply because they have a larger profile, so progress made by those organisations is seen as the wave of the future – and their thinking will start to trickle down as it becomes the gold-standard.

“Our hope is that is the case [that it will trickle down].” Petschler said.

“I think this time [the latest quarter] around there has been a real focus on companies who don’t have any women on their boards.

“That kind of attention and focus will create a dynamic of its own, or at least encourage the question to be asked not only by the boards of ASX200 companies,”

The second reason comes down to a lack of resources on behalf of smaller companies.

Smaller companies simply don’t have the time, energy, or financial weight the throw behind the issue – whereas larger companies may have specialised recruiting teams or be able to outsource recruiting to an outside partner.

“We suspect smaller companies have fewer resources available to them so in their capacity haven’t really grappled with diversity as a governance and management issue as some of the larger companies with more resources have done,” Petschler said.

Smaller companies don’t necessarily have a lot of time to sit down in the boardroom and think about gender equality – which is still seen as a ‘big picture’ issue.

In lieu of that, Petschler said many smaller companies rely on social and professional circles for talent.

“I think what you see at that end of the market is a lot of recruiting is done because a director may know someone – so that doesn’t really lend itself to rapid cultural change,” she said.

That isn’t to make excuses for smaller companies though, and Petschler encourages small companies to make some time to think about the diversity of their board – because it will lead to better governance.

“I think what you’re seeing is the ASX really focusing on this issue through the governance lens,” she said.

“There is a growing amount of evidence that diversity on boards brings a diversity of viewpoints and therefore naturally lends itself to better governance – companies who have the same kind of people on their board over and over again are locked into certain patterns of thinking.

“That’s probably not great for a business no matter how small.”