The net profit of $103.9 million represented year-on-year growth of 17.9%, but analysts had set the bar fairly high for the company which traditionally outperforms expectations.

Brokers also noted that the company benefited from a 53 week trading period in fiscal 2016 and this effectively added $16.8 million in sales and $7.4 million in earnings before interest and tax.

The underlying net profit of $103.9 million was slightly shy of Bell Potter’s expectations ($106.9 million). However, analyst Sam Haddad was impressed with the result and more importantly the group’s outlook for fiscal 2017, prompting him to maintain a buy recommendation while lifting the 12 month price target from $17.20 to $18.16.

He noted that second half sales in the company’s fashion businesses were weighed down by unseasonably warm weather, as well as an early Easter/misalignment of school holidays, which mainly impacted the Dottie and Jay Jays businesses.

However, looking beyond the impact of these events he noted all core brands continue to resonate strongly with consumers and that the company finished in a strong inventory position which augurs well for fiscal 2017.

There may still, however, be fluctuations and investors should be mindful of these and seek professional financial advice if considering this stock for your portfolio.

While management didn’t provide quantitative guidance for fiscal 2017, Haddad was encouraged by the fact that strong trading was experienced in June and July.

However, the broker still likes the underlying business, and while it downgraded earnings per share forecasts for fiscal years 2017 and 2018 this was partly impacted by changes in its currency forecasts.

Perhaps a better indication of the broker’s take on the stock was the fact that it slightly increased the 12 month price target from $16.35 to $16.43.

The group’s Peter Alexander business remains a key growth driver having delivered sales growth of 20.4% in fiscal 2016. An aggressive new store rollout program in Australia and New Zealand as highlighted below is already contributing to profit.

Management said it anticipates opening three new stores in the first half of 2017 with four more to be refurbished and upgraded during that period. 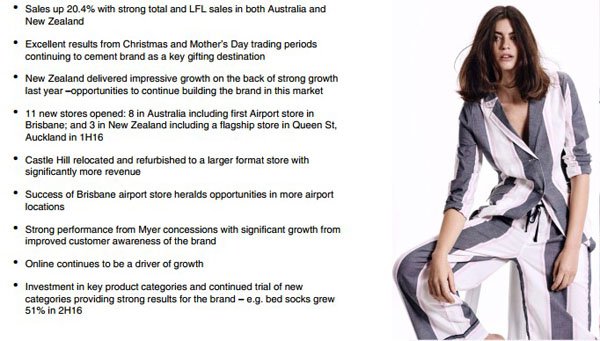 The other key growth driver is the group’s Smiggle business and this is set to continue as highlighted by Chief Executive Mark McInnes, “Our strategy is unchanged and we continue to pursue it relentlessly, investing in expanding Smiggle globally and delivering a superior online experience for our customers. A total of 52 stores were opened across all geographic regions in fiscal 2016.

McInnes noted that Smiggle sales were up 41.8% for the year and 79% over two years. Smiggle stores are now located in Australia, New Zealand, Singapore, England, Scotland, Wales, Malaysia and Hong Kong. Importantly, PMV is only a relatively new entrant in most of these markets leaving substantial scope for global expansion.

The UK is arguably the exception with 40 new stores having been opened during the year, however it needs to be taken into consideration that a five-fold increase in stores is expected by calendar year 2019.

While some questions were raised as to Smiggle’s prospects in the UK following the Brexit vote, management has undertaken a thorough review of trade by store and gained an understanding of possible implications for the brand’s performance and continued store rollout.

In summing up, it was noted that sales post Brexit are equal to or better than pre-Brexit with strong like-for-like sales growth continuing. Consequently, the company will continue its initial intentions to grow the business aggressively in this region.

The top 90 UK locations have already been secured (stores are already trading or terms have been agreed), and management is now in a position to secure favourable terms and incentives with landlords with a view to growing to 200 stores with annual sales of $200 million by calendar year 2019.

There is also substantial scope for expansion in Singapore, Hong Kong and Malaysia with management targeting 35 stores over the next five years in Hong Kong and 25 in Malaysia. 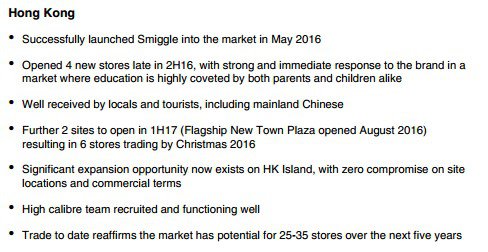 It is important to remember here that previous trading trends are not indicative of future share price performance and they should not be used as a basis for investment. It should also be noted that broker projections are estimates that may or may not be met and independent advice should be sought before investing in ADA.