Praemium lives up to broker’s expectations

As part of our broker monitoring, FinFeed advised in mid-August that Ivor Ries from Morgans CIMB had upgraded Praemium’s (ASX: PPS) share price target from 49 cents to 57 cents after the company exceeded his profit expectations. This implied share price upside of 40% at that time.

Ries also upgraded forward earnings estimates with the expectation that the company would use its relatively robust balance sheet to continue to invest in technology which would make it more competitive in the self-managed superannuation accounts segment.

Ries was on the mark with his take on the company and his price target of 57 cents, with PPS’s shares touching 53.5 cents last Friday before closing yesterday at 51 cents.

PPS listed on the ASX in 2006 and has gradually established a position in the funds management industry whereby it offers separately managed account (SMA) technology to blue-chip clients.

Consequently, it represents a play on both the financial and the technology sectors. Importantly, over the last three months PPS’s share price has outperformed both the S&P/ASX 200 information technology and financials indices by 40%.

However, Ries sees more upside to come, and he now has a price target of 61 cents on the stock. In particular, he noted that the group had reported strong net fund inflows in Australia and the UK in the September quarter, ending the period with a record $5 billion in funds on platform.

Of course these inflows are no guarantee to continue and investors should seek professional financial advice for further information.

That said, there is no questioning the quality of PPS’s performance in the three months to September 30, 2016, as indicated by the following data. 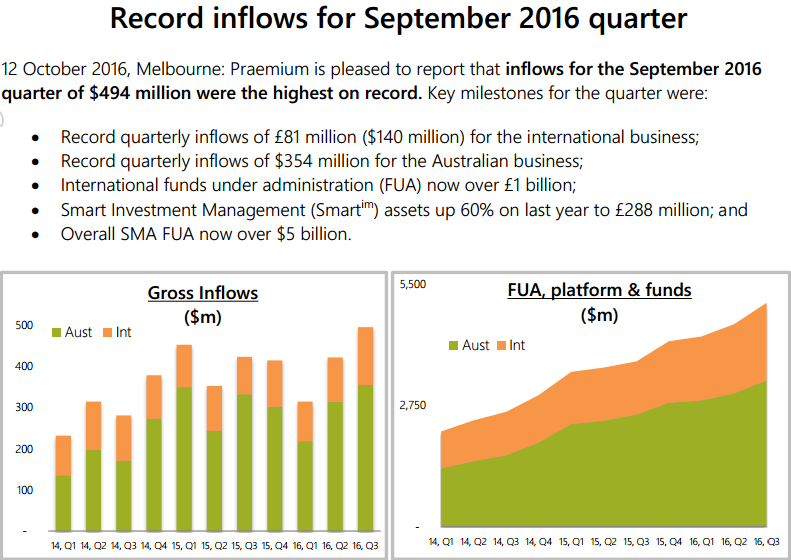 Importantly, the source of new inflows was highly diversified, reflecting the benefits of PPS’s recent investment in training client advisers on the use of its SMA platform.

Ries highlighted that further account uploads from new clients (including JB Were) should see further strong growth in funds on platform in the three months to December 31, 2016.

The uptick in performance couldn’t have come at a better time as the weakening in the Pound has a negative impact on PPS’s earnings.

Lafitani Satiriou from Bell Potter is also bullish on the stock, recently upgrading his cash earnings per share for fiscal years 2017, 2018 and 2019 by 7.1%, 8% and 7% respectively. He was impressed with the quarterly update and the earnings upgrades are driven by the higher than expected gross inflows referred to by Ries.

Satiriou has pitched his price target substantially higher than Ries, increasing it from 72 cents to 75 cents, in keeping with earnings upgrades.

We will continue to monitor the stock’s progress and broker opinion. The company traditionally provides details of inflows in mid-January, and this is shaping up as a potential share price catalyst.