Pot or not, your body produces its own cannabinoids 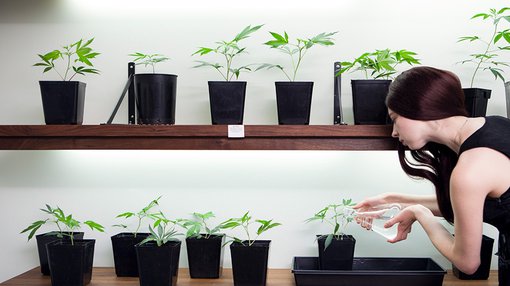 One of the major upsides of medicinal cannabis, alongside the catalogue of therapeutic benefits that can come with it, is that it’s virtually impossible to fatally overdose.

As general knowledge around medicinal cannabis gradually increases, this is something that’s becoming more commonly understood. What you may not realise, however, is that this follows from the fact that the human body actually produces its own endogenous cannabinoids: natural equivalents of the compounds found in the cannabis plant, such as THC (tetrahydrocannabinol) and CBD (cannabidiol).

These endogenous cannabinoids or endocannabinoids (‘endo’ means ‘from within’) tap into what has been termed the endocannabinoid system (ECS), which plays an essential role in the body’s ability to interact with the cannabis plant, and, in turn, the effectiveness of cannabis as medicine.

First identified in the late 1980s, the ECS is one of the most crucial physiologic systems at play in establishing and maintaining human health, and is responsible for modulating every other body system from the bones to the central nervous system.

Without it, we wouldn’t get the therapeutic benefits from cannabis, or the high that’s associated with it.

The buzz on the endocannabinoid system

Named for the plant that led to its discovery, the human endocannabinoid system is a complex network of cannabinoid receptors found throughout the entire body: in the brain, organs, connective tissues, glands and immune cells.

The ECS is made up of several integrated mechanisms. Enzymes create and destroy cannabinoids, receptor sites on cells to receive cannabinoids, and the endocannabinoids themselves — small molecules that activate cannabinoid receptors. Endocannabinoids are like the body’s own THC; the cannabis plant’s most well-known and psychoactive compound.

Endocannabinoids are not just present in humans, either, but are found in all animals and fish — with insects the only exception.

Like a key fits into a lock, cannabinoids are designed to link together with the cannabinoid receptors (CB1 and CB2), spurring the receiving neuron into action and triggering a set of events to carry out a range of cellular responses required for healthy functioning.

A system of modulation

In the words of biologist, Robert Melamede, the ECS is therefore an “all-pervasive modulator of biochemistry”. Melamede discusses how the ECS works in this short video:

Besides maintaining basic functions, the endocannabinoid system also acts in response to illness. Tumour cells have been shown to express more cannabinoid receptors than healthy cells. Research also shows a rise in endocannabinoid levels in patients with a number of disorders, including anxiety, arthritis, chronic pain, and Parkinson’s disease.

However, it has been noted that while the ECS is linked to a range of crucial processes and is concentrated in the brain, nervous system and reproductive organs, it does not affect regions of the brain controlling heart and lung function. This is one of the main reasons that fatal overdoses from cannabis and cannabinoids don’t occur.

Essentially, the ECS helps coordinate messages between the brain and the body, ensuring that both respond properly to both internal and environmental stimuli. It helps to manage the sleep-wake cycle, making sure that your body becomes tired at night and more alert in the morning. Similarly, endocannabinoid molecules tell you when you’re hungry and signal that it’s time to eat at certain times of the day.

According to medical cannabis expert, Dr. Dustin Sulak, the ECS is “literally a bridge between body and mind.” He goes on to explain: “By understanding this system we begin to see a mechanism that explains how states of consciousness can promote health or disease. In each tissue, the cannabinoid system performs different tasks, but the goal is always the same: homeostasis, the maintenance of a stable internal environment despite fluctuations in the external environment.”

Homeostasis is the idea that most biological systems are actively regulated to maintain conditions within a certain narrow range. It describes a dynamic state of balance that exists within the body.

To explain the way this works, Leafly writer Nick Jikomes invokes the Goldilocks story, suggesting that the most optimal outcome often sits somewhere in the middle, between two extremes.

“We don’t want things too hot or too cold, but just right. Because of its vital role in making sure that cells and systems remain in their physiological Goldilocks zone, the ECS is tightly regulated; it gets deployed exactly when and where it’s needed,” Jikomes said.

However, he notes, this doesn’t mean that activating the ECS, via the consumption of cannabis or any other means, will always make things “just right”.

The presence and operation of the ECS across multiple bodily systems tells us a lot about why such a broad and diverse range of medical conditions and illnesses respond positively to medicinal cannabis treatment — from epilepsy to cancer.

With its widespread effects and therapeutic potential, the ECS is a considerable target of medical research, and much more remains to be uncovered.