In his view the studies confirmed the project’s status as the world’s best undeveloped spodumene deposit and galvanised the company’s position as the ‘go to’ ASX lithium exposure.

Of course this is only one broker’s view and there are many factors to consider when assessing this stock for your portfolio. Seek professional financial advice for further information.

In response to these developments, McIntyre increased his price target by 32% to $1.25, implying a return of more than 160% relative to the company’s share price of 47 cents.

The two studies released by PLS were a Definitive Feasibility Study (DFS) for a base case 2 million tonnes per annum lithium-tantalum development at Pilgangoora. The key metrics were as follows.

Based on this scenario management expects construction to commence in the fourth quarter of calendar year 2016 and be commissioned by late 2017.

Here’s a map of the area: 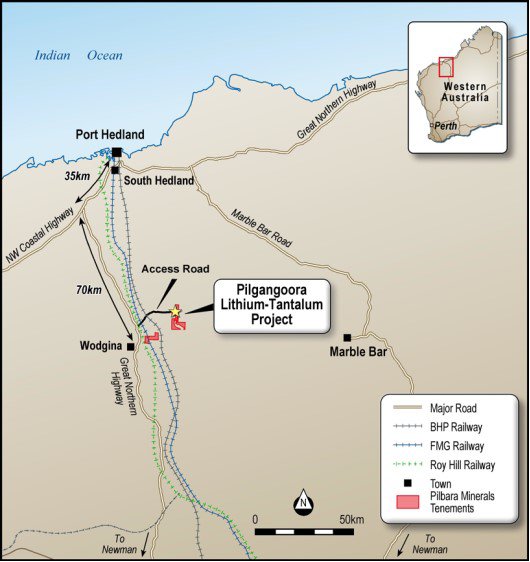 The other interesting news referred to by McIntyre was the completion of a Prefeasibility Study (PFS) aimed at assessing expansion options for the future, specifically the establishment of a 4 million tonnes per annum run of mine ore production and processing facility, subject to further engineering studies and future market conditions.

The decision to undertake a PFS in order to examine the prospect of increased production was based on management’s view that the substantial growth in the Pilgangoora ore resource and reserves experienced during the year certainly indicated that having adequate feedstock would not be an issue.

Furthermore, PLS’s Managing Director and Chief Executive, Ken Brinsden pointed to the ‘exceptionally strong outlook for global lithium demand’ as supportive of the development of a larger production facility.

McIntyre looked at both scenarios, highlighting that at current prices he estimates payback for a 2 million tonnes per annum project would be less than 1.8 years, extremely impressive given the forecast 36 year mine life.

He noted that at current prices the net present value of such a project would be circa $1 billion. This compares with the company’s current enterprise value of approximately $490 million.

Given the potential scalability of the project, McIntyre sees PLS as a takeover target. Factors working in its favour include above average grades, the fact that tantalum credits drive down costs, low permitting and sovereign risk, low capital intensity and relatively quick payback and robust return on capital.

While the sharp escalation in lithium demand tends to dominate the news it is worth looking at the tantalum landscape. According to Roskill’s twelfth edition 2016 tantalum report, the outlook for tantalum supply and demand during the period 2016 to 2020 indicates a possible surplus of supply until 2019 followed by a possible deficit of 40,000 pounds in 2020.

As a point of reference, Roskill has been a leader in international metals and minerals research since 1930 and its publications which cover 75 market reports, data books and newsletters have been published since 1970.

The group is an independent, privately owned company that doesn’t have a stake in mineral projects.

Roskill highlighted that there is a delicate balance in the tantalum market because many of the areas where the mineral is produced are prone to political risks, natural disasters and operational problems (Africa is a prominent producer), indicating that the supply side of the equation can waver quickly and substantially.

The following chart demonstrates the commodity’s historical price volatility while also highlighting Roskill’s projections out to 2020. 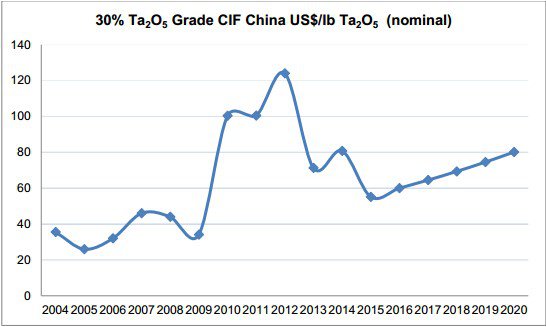 Based on McIntyre’s projections, PLS will generate revenues of $333 million in fiscal 2019, its first year of full production. Underlying net profit is expected to be $124 million, representing earnings per share of 9.4 cents.

This implies a forward PE multiple of 4.9 relative to Monday’s closing price of 46 cents.

It should be noted that commodity price projections, earnings forecasts, price targets and past share price performances may not be met or replicated and as such should not be used as the basis for an investment decision.