Pet care could draw investors away from troubled healthcare sector

Yesterday FinFeed highlighted the difficulties being experienced in various parts of the healthcare sector and how this was being reflected in both the operational performances and share price movements of major players such as Ramsay Health Care, Healthscope, Sonic Healthcare and Primary Health Care.

Setting aside the likes of CSL and Cochlear these are some of the largest players by market capitalisation in the S&P/ASX 200 Healthcare Index (XHJ). They have traditionally been the go to stocks for defensive investors, and in particular Ramsay Health Care and Sonic Healthcare with combined market capitalisations of more than $20 billion have been targeted by institutional and retail investors alike for more than a decade.

Despite the headwinds we referred to, it seems that the market’s love affair with these stocks isn’t over given they are trading on an average fiscal 2018 forward PE multiple of approximately 18. However, it may not be too much longer before investors lose patience and look for other areas of nondiscretionary spending that offer better earnings predictability.

It should be noted, however, that any catalysts are speculative at this stage and should not be taken as guaranteed. Investors should seek professional financial advice for further information.

This is despite the fact that volatility within their respective sectors continues and forecast earnings growth is subdued, as well as being unpredictable with many analysts suggesting there could be downward revisions to guidance and forecasts in fiscal 2018.

However, the underlying premise that this is a defensive sector for the best part is still intact. Healthcare is a non-discretionary area of consumer spending. But regulatory changes have stifled the growth traditionally achieved by these companies, and exacerbating this trend is the fact that health insurance is increasingly beyond the reach of many consumers.

This has the potential to shift spending from private to public healthcare, and in trying to address the issue of affordability, governments in many countries are imposing regulatory changes which significantly lower the margins these companies have historically been able to achieve, a vital factor in delivering the growth that has supported premium valuations.

While the pet care industry is also regulated, this basically applies to the safe and efficient running of veterinary practices. The need for workers to be properly trained and accredited is an obvious regulatory area, and what’s more works in favour of the industry.

The industry remains highly fragmented with substantial opportunities for the three ASX players highlighted to grow through the acquisition of smaller practices. As companies expand their presence through acquisition they not only increase top line growth, but margin improvement achieved from operating under the one banner assists in boosting profitability.

In terms of the supply demand dynamics, the industry is alive and well as indicated by the following data. 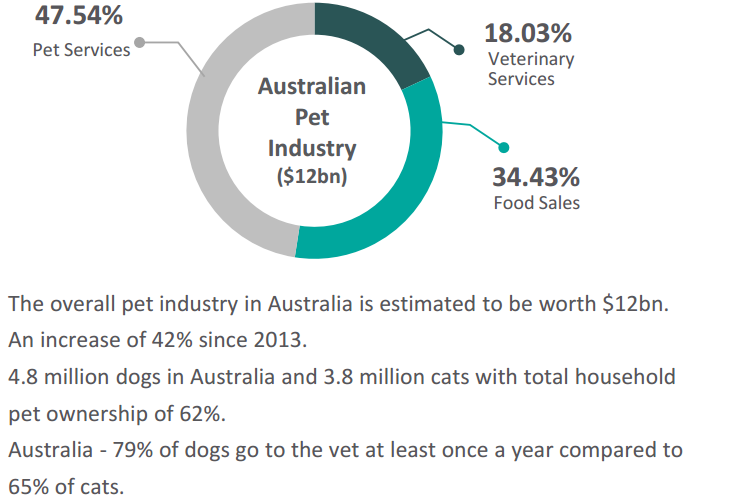 Is it time to snap up the heavily sold down Greencross

Greencross (ASX: GXL) was a prime example of the growth by acquisition strategy as the company generated strong growth through the addition of existing businesses with established clientele. In the five-year period between June 2009 and June 2014 the company’s market capitalisation increased from approximately $10 million to more than $900 million.

During this period revenues increased from $45 million to $370 million. While the company has been able to generate strong revenue growth over the last three years with fiscal 2017 income above $800 million, earnings growth has only been nominal and its share price has taken a hit.

This was mainly a function of the company growing too fast too soon and having difficulties in transforming into a vertically integrated business following the acquisitions of Pet Barn and City Farmers which operate in the specialty pet care retail industry.

However its shares have been sold down substantially as indicated in the following five-year chart, and it could be argued that a buying opportunity could present itself, particularly given the 12 month consensus price target implies upside of approximately 20% to the company’s current trading range.

GXL continued to expand its retail and clinic network in fiscal 2017 and it now has approximately 180 clinics and specialty and emergency centres. The group increased its number of retail stores from 221 to 239, although gross margins declined slightly as the company increased its investment in that sector.

It should be noted, however, that historical performance should not be used as the basis for an investment and that any further catalysts are speculative at this stage and should not be taken as guaranteed. Those considering stocks in these markets should seek independent financial advice. 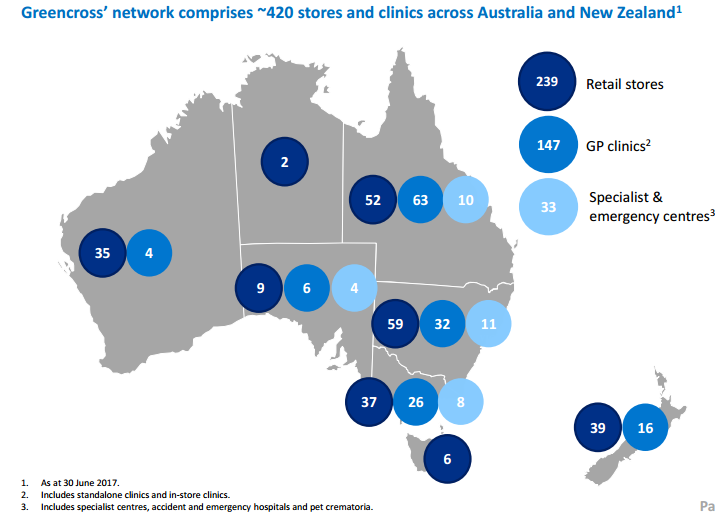 In contrast, margins in the Australian veterinary business increased to 77.7% driven by strong performances from its specialty and emergency businesses. This is a compelling area of GXL’s operations as it is difficult for small businesses to provide a similar service.

Industry dynamics should continue to support this area of the company’s business as well as the veterinary area generally. Substantial progress has been made in developing new diagnostic and clinical equipment in the pet diagnostic and surgical areas, effectively providing additional sources of income.

Consensus forecasts point to earnings per share growth of 11.1% in fiscal 2018. Given that the company is trading on a PE multiple of approximately 13 there could be scope for a PE based rerating, particularly if the company were to surprise on the upside with its fiscal 2018 guidance/result.

It is worth noting that once the company’s growth stepped up a gear in 2011 it consistently traded on PE multiples in excess of 20.

Compared with Greencross, National Veterinary Care (ASX: NVL) has had a relatively short history as an ASX listed company, having hit the boards in August 2015. However, it has made every post a winner since then with its current share price of approximately $2.70 representing an increase of 170% compared with its IPO price of $1.00.

Management doesn’t appear to be interested in stepping outside the basic veterinary services market segment, perhaps having seen the challenges faced by GXL in attempting to establish a vertically integrated model.

However, the company has demonstrated its ability to gradually build its portfolio through the addition of quality new practices acquired at attractive prices based on sales prices to earnings before interest and tax (EBIT) accretion.

For example, in mid-July the company announced the acquisition of seven clinics for a total consideration of $11.7 million. This was expected to generate annualised EBIT of approximately $2.4 million, implying a relatively modest purchase price to EBIT multiple of less than five.

When NVL listed on the ASX it used the proceeds to acquire a portfolio of 34 practices, and since then this has grown to 58 with the most recent editions occurring only last week following the settlement of two Queensland-based veterinary clinics.

However, the company has more than 300 independent clinics using its management services and procurement division, an area of the business that has grown by 23% in the last 12 months.

The following indicates the company’s geographical presence with a strong skew towards eastern seaboard states of Australia. This is consistent with GXL’s approach for most of its time as a listed company. 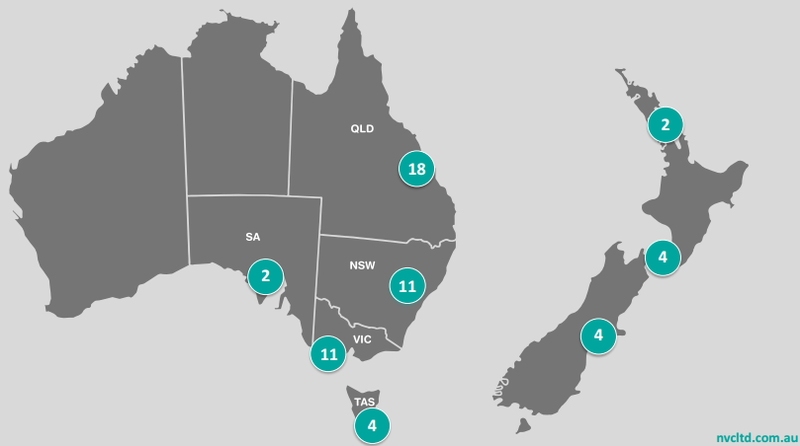 The relatively immature NVL business has substantial scope for growth and this is reflected in analyst’s projections. Consensus forecasts point to compound annual earnings per share growth of circa 17% between fiscal years 2017 and 2019 inclusive.

However, this appears to be largely captured in the company’s fiscal 2018 PE multiple of 19. Furthermore, the company is trading close to its 12 month consensus price target of $2.83. The following chart indicates NVL’s share price performance since listing.

The newest industry entrant is Apiam Animal Health (ASX: AHX), having listed on the ASX in December 2015 with an IPO price of $1.00. While the company’s shares opened at $1.30 on the first day of trading and hit a high of $1.88 by September 2016, it has been all downhill since then.

It isn’t so much that AHX has performed poorly, though there have been some teething problems, but it could be argued that it was overvalued in its early days. This invariably results in a share price capitulation when companies fail to meet the expectations of investors, as can be seen in the following share price chart.

However, there are indications that the stock is back in buy territory, and more importantly there is increasing confidence that the business has stabilised from an operational perspective and is poised for growth. In mid-September, institutional investor AustralianSuper snared a 5.8% stake in the group, having recently acquired approximately 2.8 million shares at 76 cents.

Note that this should not influence your decision to invest in this stock. Investors should seek professional financial advice for further information.

AHX’s business model is very different to that of GXL and NVL. The company is positioned in the Australian market as a vertically integrated animal health business, providing a range of products and services to production and mixed animals.

The company’s strategy is to service this commercial end of the market through the provision of veterinary services, ancillary services and genetics. It also generates revenues from the wholesale and retail of related products, together with technical services related to food chain security.

The following provides a snapshot of its areas of operation, as well as indicating management’s strategy in terms of entering new markets and harnessing growth through investment in new technologies such as x-ray, ultrasound and CT machines, similar to what we referred to in terms of highlighting the additional revenues that are being generated by veterinary practices as a result of the introduction of new diagnostic and surgical equipment. 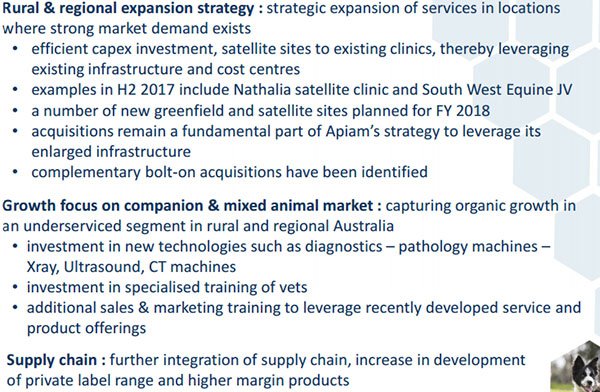 Jonathan Snape from Bell Potter sees three key swing factors emerging in 2018/19, the first being improving dairy fundamentals which should support a recovery in revenues from that market segment.

He also anticipates a recovery in feedlot utilisation rates which will support the company’s product distribution business. Snape also expects to see the company benefit from the successful integration of assets consolidated in fiscal 2017.