It’s no secret the global oil market can be erratic. For one thing, oil is probably the most ubiquitous and widely-used commodity, which means everyone is affected by it. Second, oil prices are often volatile due to a sensitive demand/supply structure at a global level.

Most commodities have experienced marked price inflation over the last 18 months. One fundamental reason is gradually improving GDP figures across both the developed and the developing world. According to analysts, economic growth naturally supports the demand for energy.

Famous oil price shocks like we saw in the 1970s, as well as in recent times with oil prices climbing to almost US$200 per barrel, indicates that oil’s propensity to deliver sharp unexpected pangs to both hearts and wallets remains strong.

Other commodities like lithium are gradually making their way to the fore of world resource markets and threatening oil’s hegemony as the most crucial commodity on Earth. However, this is a gradual process, one that’s likely to take several years to achieve the same level of ubiquity that oil has enjoyed for decades.

Given this backdrop, there could be trouble ahead.

China, the world’s biggest oil importer, is on the verge of launching its very own dedicated commodities exchange to allow domestic futures trading. The first commodity to grace the new exchange? Crude oil.

China had been threatening to surpass the US as the world’s largest importer of crude oil for more than a decade and achieved this milestone last year. 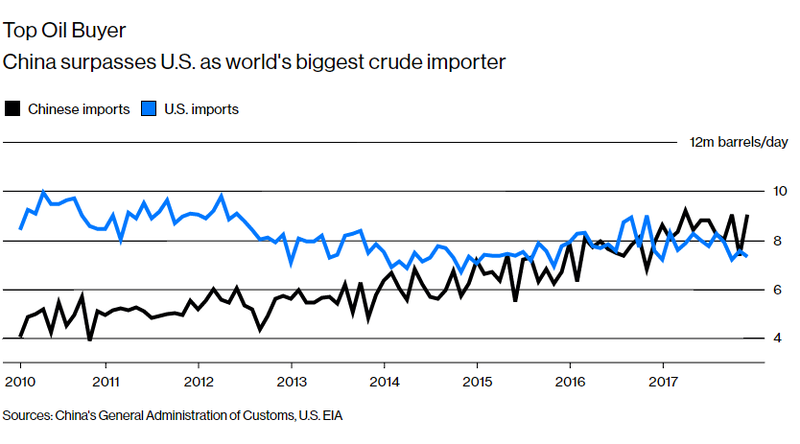 The writing has been on the wall for over a decade, but it seems like it’s only now that the threat to US petrodollar hegemony is being read and taken seriously by market participants.

The proposed futures exchange is to be based in Shanghai’s free trade zone, thereby opening the gates to foreign participation from the get-go. The Shanghai International Energy Exchange will use the acronym INE and will commence trading on 18 January 2018 according to Bloomberg.

The launch of INE introduces a direct rival to the currently dominant futures market contracts being offered in the US and Europe. West Texas Intermediate (WTI) trades on the New York Mercantile Exchange (NYMEX), while (Brent) trades on the ICE Futures Europe exchange in London, UK. Together, this duo of financial products account for the vast majority of all oil traded globally.

This may be a good state of affairs for producers and consumers that predominantly use the US dollar and conduct many transactions through the US and Europe. However, the majority of the world’s population live in Asia, with China and India accounting for approximately 2.6 billion people — that’s a whopping 30 per cent of the world’s total population by most estimates.

It therefore makes little sense for Chinese oil companies and Chinese consumers to continue utilising US dollar-denominated exchanges. It seems the time has come to spread its wings in the financial market arena in the form of its own futures exchange.

There are several possible reasons for China to consider its own trading infrastructure. One is to continue its broader shift towards indomitable self-sufficiency and improve its ability to enforce macroeconomic policy globally.

Another key factor is that paying for oil in yuan is a component of Chinese President Xi Jinping’s ‘One Belt, One Road’ initiative to develop ties across Eurasia, including the Middle East. China is aiming to literally pave its way to new markets through strategic deals and allies.

To provide some context, nickel was the last commodity to be listed on China’s own dedicated exchange back in 2015. Within two months, trading in Shanghai outpaced trading volumes at the London Metal Exchange (LME).

Speculators appear to play a far greater role in China than they do in countries like the US, and that fact can add a real boost to trading volumes. On the flip-side, this can make markets more susceptible to volatility. The performance of China’s benchmark stock index, the Shanghai Stock Exchange Composite Index (SHCOMP), over the past few years underlines the double-edged sword effect of speculative activity, as can also be seen with the current volatility in Bitcoin.

Another important factor relating to oil production quotas is that Chinese participation in Saudi Aramco’s planned initial public offering could help sway Saudi opinion toward accepting yuan, which is used in only about two per cent of global payments.

As Saudi’s state-sponsored candidate in the global tussle for oil hegemony, Aramco rivals its privately-funded US and European counterparts such as Chevron and BP. Aramco is currently in the middle of finalising its mega-bucks IPO worth around US$2 trillion, making it the largest oil company to go public in history. Its listing would place the newly-listed entity as the largest company in the world by market capitalisation. As a comparison, Apple is currently worth around $884 billion by market capitalisation.

What about the OPEC factor?

As for OPEC, the organisation appears to be stuck between a rock and a hard place.

Its members agreed on an output cut last year, which has been supportive for oil prices. But the shadow cast from US shale producers is likely to remain a key risk factor for both oil prices and OPEC’s significance on the world stage. 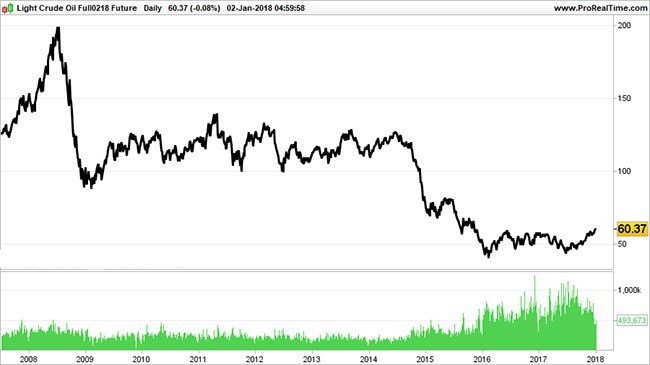 The OPEC production cut at the end of November 2016 and the election of an energy-friendly administration in the US were both supportive for oil last year. However, as prices moved above the US$50 per barrel level, shale output in the US increased, and hedging activity grew as producers locked in future prices above production cost levels.

On 25 May 2017, OPEC members extended their quotas until the end of the first quarter of 2018. This event has already become a focus for speculators first and foremost because any significant cut or expansion directly affects oil price expectations among traders.

Fewer regulations under the Trump administration and a more favourable corporate tax policy have improved the economics for US producers. So much so that the US oil industry is now one of the world’s most significant exporters of crude oil and is likely to continue its now-famous ‘shale gale’ for years to come.

US oil production could rise to above 10 million barrels per day in 2018, making the US a competitor with Saudi Arabia and Russia for the title of world’s leading oil producer. The US is already the world’s leading ‘swing producer’ of oil. When the oil price declines, shale output also tends to decline, which means US consumers tend to import cheaper oil from abroad.

However, when the oil price rises, US shale production tends to rise in tandem because producers are keen to take advantage of improved project economics (made possible by a higher oil price).

A case could be made that it’s in the best interest of all three nations for the oil price to remain above the $50 per barrel level. At that price, Russian oilers receive a stable revenue flow, US production can flourish, and the Saudis can eventually cash in on their crown jewel, Aramco.

As the world’s preeminent reserve currency, the US dollar is also a benchmark pricing mechanism for crude oil. The stability of the US dollar has also been a supportive factor for oil prices during the last three months. However, if US monetary policy begins to erode the value of the US dollar, oil priced in US dollars will look increasingly more attractive on a comparative basis.

The bottom line at the top of the barrel

The old status quo where OPEC can influence oil prices on a whim has changed dramatically since 2016. With US output approaching 10 million barrels per day, it is now the US, Russia and Saudi Arabia that call the shots when it comes to supply, while OPEC has arguably become somewhat of a spent force on the international stage.

Moreover, technological advances are destined to see other cleaner sources of energy compete with oil for market share in the years ahead. This may be why China is so adamant about introducing its own oil exchange to world markets — and why several other countries could soon follow suit.