Australians love to travel, and Flight Centre is cashing in on it.

The travel booking company is now up more than 50% over the past year, including a 22% rally over the past month. That rally was topped off with a 10.4% rise on Wednesday — the best S&P/ASX 200 index performer of the day — after FLT announced that it expects its full year results to be better than previously expected.

Flight Centre has recorded higher profits each year since the GFC in 2008 and 2016-17 looks like it will be no different.

The company now anticipates its full year profit (before tax) will come in between $325 million and $320 million. That’s at the top of the previously announced range, and earlier guidance, of $300-$330 million.

This performance might surprise those of you who thought online travel agencies would by now be putting traditional travel agents out of business.

Yet FLT is unwavering, with a renewed focus on the bottom line via cost cutting and generating strong sales volumes, offsetting cheaper international airfares.

Management cited strong sales and profit growth, particularly in the second half of the year. It said that its North American operations were particularly strong, while results were improving in New Zealand and Australia.

That said, not everyone is convinced that Flight Centre is a buy at current levels.

Most shorted stock on the ASX

In fact, as of Wednesday last week, FLT was the most shorted stock on the ASX. That means there are a lot of people betting their money that the share price is due for a fall.

Short sellers make their money in a falling market, where they borrow shares in a company, which they then pay back once (ideally) the share price falls and the stock can be purchased at a lower price. The profit is the difference between the initial sell price and the later buyback price.

It’s not just short sellers that are expecting the stock to underperform. A number of brokers downgraded the stock after the FLT’s revised profit forecast. Their reasons tend to be related to the rally in the share price which they say leaves little value left at current levels and flies in the face of the improved profit guidance.

Credit Suisse cut its recommendation on FLT from “Outperform” to “Underperform” after the recent run up in the share price has, in their view, overshot its fair value.

Citigroup cut its recommendation to “Sell”, explaining that the share price already factors in the company’s good news. While the broker acknowledged the good news, it warned that the lower outbound resident departures seen in recent months tend to be a leading indicator for FLT.

Macquarie reiterated its “Underperform” rating on the stock, due to lower expected profit margins over the coming year coinciding with “continued airfare softness” over the year.

Here is the Flight Centre one-year share price chart, on a weekly basis: 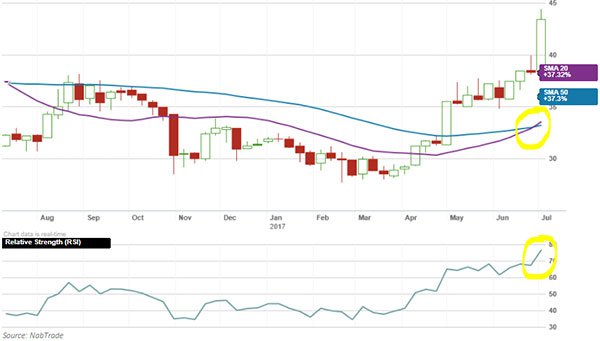 Yet, an indicator that the rally may not continue much longer is the fact the stock has now entered ‘overbought’ territory — that is, the 14-RSI has moved above 70 on a weekly chart. It could also mean the stock is in a longer-lasting uptrend.

For those not familiar, RSI refers to the Relative Strength Index – a momentum indicator used to measure whether a stock is overbought or oversold. It compares the magnitude of recent gains and losses over a certain time period to measure speed and change of price movements.

At the same time, many short-sellers of Flight Centre have already been burned – and the stock could very well continue to surprise. More will be revealed when the company announces its full year results on August 24.