Having only listed on the ASX in August last year, Nusantara Resources (ASX:NUS) may not be on your junior gold stock radar. But a comparison with its peers and closer look at the company’s flagship project in Indonesia’s South Sulawesi province, presents some compelling reasons to take note.

The Awak Mas Gold Project is a very advanced large project that offers a unique opportunity in the Asia-Pacific region. This project is one of only two currently identified undeveloped gold mines in Indonesia, yet comes with substantial and advanced technical analysis, with the imminent completion of a DFS expected, suggesting that the project will be in production in early 2021.

Nusantara has continued to advance its DFS during the course of the year with activities including preparation of mine designs, definition of plant design and completion of engineering cost as well as completion of field work and updating cost estimate for the TSF.

The DFS is now just weeks away from being released.

Indonesia is an underappreciated investment location for Australian investors, even though its government is highly supportive of mining and economic development. The country has been recognised as one of the most attractive destinations for investors globally, with the National Resource Governance Institute ranking Indonesia as 11th out of 81 mining destinations.

Sulawesi in particular, is an attractive mining destination with a good regulatory environment, with NUS receiving both local Sulawesi and central government support.

Awak Mas is a large, long-life, high production gold project, dating back to the 1980s. Since­ that time it has had a number of different owners, and a significant amount of technical work done. It’s seen a number of studies, as well as pre-feasibility studies, completed in the past. As stated, the DFS is now being readied for release.

Despite convincing previous results, much of the project area has seen limited exploration thus holds significant potential, with positive early results and early high-grade hits in a number of regions.

At this stage, all evidence is pointing to Awak Mas being developed into a substantial low cost gold mine.

Of course NUS still has a lot of work to do, so investors should seek professional financial advice before considering this stock for their portfolio.

The project is supported by quality established infrastructure, including access to low cost grid power, airports, people, good communication support, and access to ports. It’s located on non-forestry land and has all required approvals in place for construction. 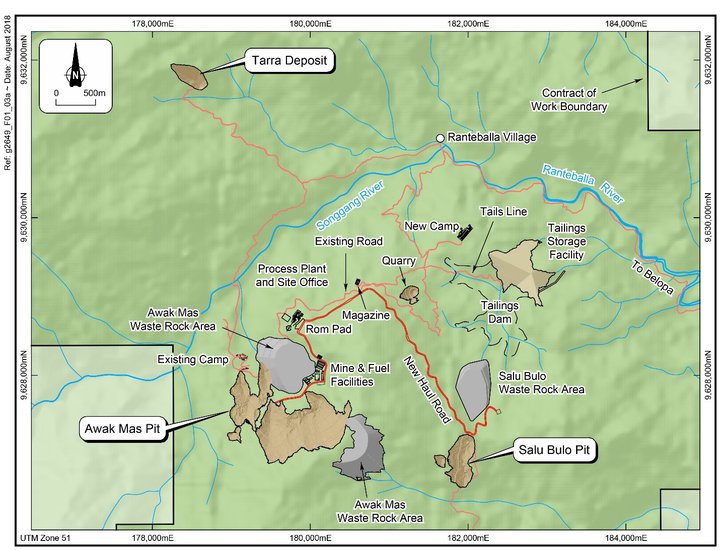 Earlier this year, NUS reached a critical milestone, posting a maiden Reserve for its Awak Mas Gold Project of over one million ounces. Drilling results, post the maiden Ore Reserve, delivered an updated Mineral Resource of 2.0 million contained ounces, while there remains significant potential for further discoveries and to grow the Mineral Resource and Ore Reserve.

Awak Mas boasts a number of strong value drivers with NUS targeting low cost open pit mining and processing. Most notably, NUS has outlined the project having a low strip ratio of approximately 3.5, along with high gold recoveries of 91%, and a 2.5 Mtpa production rate.

Notably, there are no sell down requirements for the first ten years of the project life once production has commenced. This is unlike many other low cost jurisdictions in Africa that often require divestment.

So with production scheduled to get underway in 2020, there’s no divestment requirement through to 2030.

This neatly aligns with the project’s ten-year mine life.

Over this ten-year mine life NUS anticipate annual gold production of approximately 100,000 oz, at a low all-in cost of US$750/oz.

This low all-in cost of US$750/oz should see NUS stand to weather fluctuation in the spot gold price, which is currently sitting at around US$1200.

It seems the brokers are taking notice of NUS and Awak Mas’ potential too. As at August 2, Patersons Securities have a valuation of $287 million for the Awak Mas Project, and a $0.52 share price target on the stock. This compares very favourably to the current $18 million market cap and $0.18 share price.

The broker noted the fact that the project is largely de-risked with environmental and construction approvals in place, as well as there being no sell down requirement for the first ten years of production.

Another sign of confidence can be found on NUS’s share register, which boasts a number of significant shareholders including Lion Selection Group, Australian Super, and Macquarie.

The Definitive Feasibility Study (DFS) is due in coming weeks and will provide more details of the project’s potential and its strategy to progress to production. Already, NUS has recognised over 16 high grade exploration targets at the project, across a 14,000 ha Contract of Work.