While investors tend to get excited about high profile retailer, JB Hi-Fi (JBH), it is unlikely that the group will match the much smaller Nick Scali (NCK) at an earnings growth level after NCK delivered a quality result last week which featured earnings per share growth of 32%.

To provide some context, JB Hi-Fi is trading on a fiscal 2016 PE multiple of 19 relative to consensus forecasts which point to earnings per share growth of 5.1%.

NCK is trading on a far more conservative multiple with double-digit earnings per share growth forecast in fiscal 2017 compared with consensus estimates of 6.2% for JB Hi-Fi.

Consensus forecasts are subject to fluctuation and investors should note that earnings estimates and price targets may not necessarily be realised and as such should not provide the basis for any investment decision.

However, while the relative performances of JBH and NCK perhaps poses the question as to whether it is time to look for an emerging smaller player in the consumer discretionary space, it is worth looking at Nick Scali’s performance to get a feel for the business and its scope for future growth.

The company’s share price increased from $4.80 on the day prior to the announcement of the result to an all-time high of $5.69 before closing at $5.67 on Friday. This represents an increase of 18%.

It should be noted that share prices are subject to fluctuation and investors should take a cautious approach to any investment in NCK and not base that decision solely on historical price movements.

The group’s operational statistics were extremely impressive with sales up 30% and same-store sales growth of 11.1%. The latter is important in the context of Nick Scali being a store rollout story.

As the business matures and there is less scope for store expansion there will be an increasing reliance on management’s ability to deliver organic growth.

That said, the company has consistently delivered on this front since listing on the ASX in 2006 with management traditionally under promising and outperforming. As can be seen in the following table, Nick Scali’s outperformance hasn’t just been a function of top line growth, the company has demonstrated over the years that it can drive down costs while still growing the business. 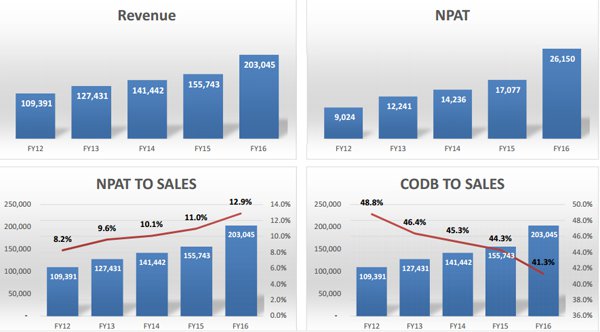 Management’s astute performance over the last five years combined with the expectation that Nick Scali’s can sustain robust double-digit growth in coming years underpinned significant increases in earnings per share forecasts off a relatively high level by Macquarie Wealth Management.

In providing guidance, management warned investors not to expect the outstanding profit growth of more than 50% in fiscal 2017 given that this was assisted by an accelerated store rollout strategy.

However, the company will continue to open stores in Australia in fiscal 2017 while targeting the opening of 3 to 4 stores in New Zealand in fiscal 2018.

Management has maintained its long-term network target at 75 stores in Australia and New Zealand. Currently the group has 47 stores, indicating there is still significant scope to grow the business.

Macquarie Wealth Management has an outperform recommendation on Nick Scali, and its fiscal 2017 forecasts imply a PE multiple of 16 relative to Friday’s closing price.