Next Science EPA approval timely given spread of COVID-19

Next Science Limited (ASX:NXS) has received notification from the US Environmental Protection Agency (EPA) that its Hospital Cleaner Surface Disinfectant (LMN8) has been accepted for registration with clearance for inclusion on the product labelling of a Claim for effectiveness against biofilm.

Next Science is one of only three companies that have been awarded that Claim by the EPA at this time.

Further, Next Science’s Surface Disinfectant is the only EPA approved product with a biofilm Claim that is non-toxic to humans with safety glasses the only required form of personal protection equipment (PPE).

The EPA’s acceptance of the Surface Disinfectant for registration is a significant milestone for Next Science in that it reflects more than six years work to gain the EPA’s approval for a biofilm standard to be used as a product claim.

Unlike bleach and many other disinfectants in the market, Next Science’s Surface Disinfectant is a non-toxic product which uses Next Science’s patented XbioTM technology to eliminate biofilm based (and free floating) bacteria. 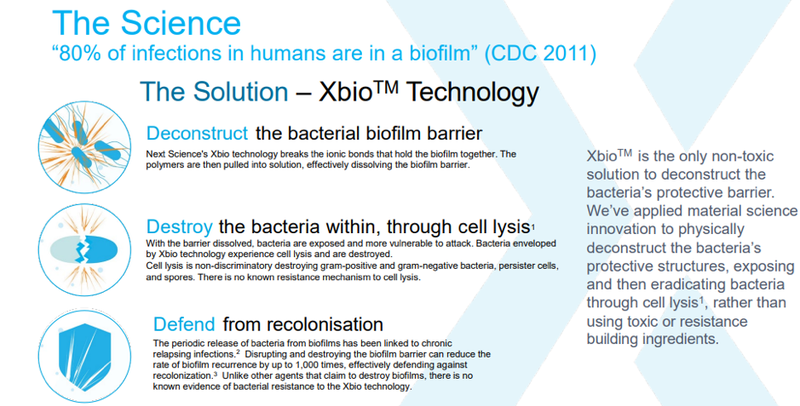 Xbio’s effectiveness against many types of bacteria including Golden Staph and E. coli (a common cause of diarrhea) has been validated by extensive clinical testing, multiple FDA clearances and more than 130,000 patient treatments since 2017.

Through third party laboratory testing, Next Science has not identified any evidence of bacterial resistance to its Xbio technology.

Negotiations with potential partners for commercialisation of the Surface Disinfectant are continuing.

Commenting on this development, managing director Judith Mitchell said, “Receipt of EPA registration of our Hospital Cleaner Surface Disinfectant LMN8 now gives us the opportunity to more widely assist hospitals and communities in the fight against infection.”

This important development comes only a month after Next Science was advised that it had received CE Mark approval for Bactisure Surgical Lavage.

This allows Next Science to market and sell Bactisure in the European Union.

Bactisure will be sold in Europe by Zimmer Biomet, the group’s global distribution partner.

Highlighting the significance of Bactisure approval, Mitchell said, “Receipt of CE Mark approval marks a major milestone for Next Science as we pursue our mission to heal patients and save lives worldwide by addressing the impacts of biofilms on human health.“

These developments come at an important juncture given the high transmission rates of coronavirus through coming in contact with surfaces carrying bacteria.