The next banking crisis is coming

Following the global financial crisis back in 2008, you could be forgiven for thinking that the major banks had solved their issues.

Yet there is a sense of foreboding; something appears to be lurking in the shadows of the banking system that could make 2008 look like a trial run.

We saw the collapse of Lehman Brothers trigger the biggest financial disaster we’d seen since the great depression.

And while we haven’t reached that point, we are currently dealing with several spot fires across the financial world that could become the next focal point for a crisis: from Brexit, to the slowdown in China, or central banks moving interest rates into negative territory to name a few.

The bedrock of the global economy, the banking sector, seems to be on shaky ground.

Is Deutsche Bank the next Lehman Brothers?

The most powerful bank in Germany, Deutsche Bank is treading the same path as the now insolvent Lehman Brothers... 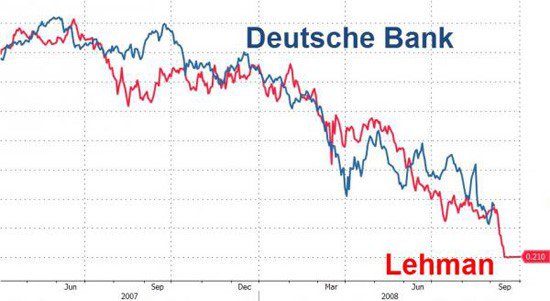 The share price of Deutsche Bank is almost down to single digits, currently at €12.57, which is below the deepest levels seen during the 2008 GFC and yet the media and politicians tell us we’ve recovered?

Something doesn’t add up here.

Furthermore, Deutsche has US$64T in derivatives exposure – compare that to the entire GDP of the Eurozone being only US$13.2T: 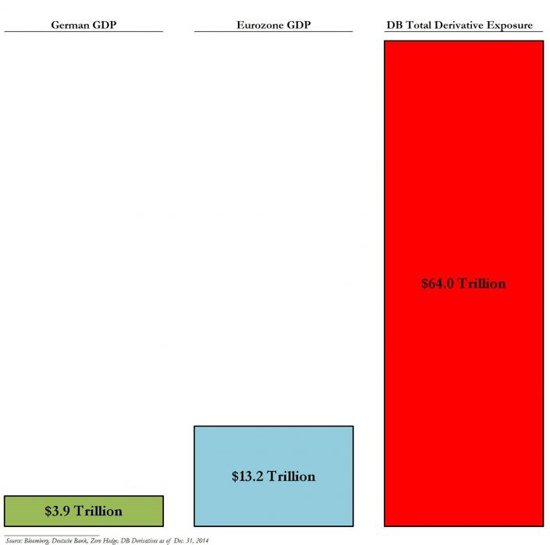 So much for regulations keeping banks in check.

The truth is Deutsche Bank, like many other banks, have become grossly over leveraged to the point where a sneeze in the market could quite easily give the sector a cold.

Still in Europe, if we move down to Italy we see that the nation’s banking system is in urgent need of a bailout to the tune of AU$525bn.

Around 17% of loans in Italian banks are considered toxic. Compare that to Australia’s big four were that figure is around 0.4%.

Following the referendum in Britain to leave the EU and with Italian banks underwater, we are going to see continued pressure placed on the Eurozone.

Needless to say the Eurozone is already on life support with the European Central Bank taking rates into negative territory and printing €800bn to try prop up the economy.

Despite all this inflation is at zero percent.

Following the 2008 crisis you’d think the banks responsible for the crash would have been dealt harsher penalties.

Quite the opposite actually happened.

The bankers received a multi-trillion dollar bailout funded by tax payers and many top level executives were promoted into positions within government.

Whilst the public was somewhat outraged to hear the American banking system was bailed out, the same groups received a backdoor bailout from the Federal Reserve, which seems to have slipped under the radar of most but not us here at FinFeed.com.

Following an economic stress test the Fed has allowed 30 US banks to buy back their own stocks in a bid to keep their share prices propped up.

With rates still at near zero percent, this is yet another temporary solution to sweep things under the rug.

The International Monetary Fund warned the Fed not to raise rates. This follows on from similar warnings issued late last year by the IMF, with the World Bank echoing the concerns saying a rate rise would create ‘panic and turmoil’.

If the financial sector has recovered and was resolved as many politicians and mainstream media wishes us to believe, then why are the two largest banking bodies warning against raising rates even a quarter of a percent from historic lows.

As another short term fix the Fed is eyeing off the possibility of another round of quantitative easing (QE4) and even undertaking in helicopter money policy in which money is given directly to the banks to keep them solvent.

Whilst in the past Australia was seen as a pillar of strength, a recent slowdown in China has seen Australia losing its darling status as seen with the Australian dollar tumbling over the past few years.

The major concern for S&P was the widening fiscal deficit of Australia. It went on to downgrade Australia’s big four banks from “stable” to “negative”. 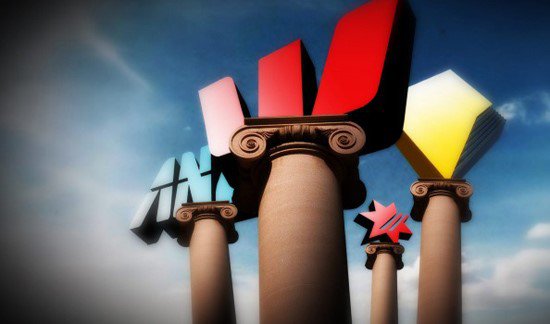 The one area of the Australian banking system that is largely overlooked is its exposure to the property market.

Whilst the belief amongst many Australians is that property only goes up, they may soon find that if the global banking sector send us into a situation greater than the mess of 2008, that property can go down.

And with it, the big four banks in Australia.

The potential triggers for the next financial crisis appear to be increasing by the week and whilst events like Brexit sent temporary panic into the markets there are much larger systemic issues still waiting to surface.