Some new names entered the vocabulary and portfolios of retail investors in January, according to the latest monthly data from global investment platform eToro.

Five new companies broke into the list of 10 most popular global stocks last month. The list represents the most bought stocks for that month rather than the most held stocks for users on the eToro platform.

Healthcare firm BioNano Genomics was the second most popular stock in January, improving on the seventh-place the month before.

But the name on everyone’s lips is GameStop, which sits squarely at the top of the table for January. A flurry of retail activity pushed the electronics retailer, alongside underwear company Naked and software company Blackberry, into the top 10 for the first time – leapfrogging enduring favourite Apple.

However, these new entrants failed to push familiar names too far down the list. Amazon still remained a popular stock with retail investors, down from eighth in December to eighteenth in January. Chinese tech giant Alibaba also took a tumble from fifth but remained the seventeenth most popular stock with eToro investors globally in January.

Gil Shapira, Chief Investment Officer at eToro, commented, “We are navigating unprecedented market conditions and we have seen some users on eToro add some ‘new’ names to their portfolios. We continue to emphasise to all retail investors that it is vital to remember the basic tenets of investing: diversify and only invest in markets and instruments you are familiar with.

“Pharmaceutical and tech stocks have remained popular with eToro investors month-on-month. The companies many of us use regularly continuously appear in this list, highlighting the value of investing in the firms you know and understand. Apple has delivered a return of nearly 75 per cent over the last year, Amazon is up nearly 69 per cent for the same period.

“This point is very important as long-term investors nearly always have more resilient portfolios and are therefore much better placed to ride out volatile conditions.”

Here's a list of the top 10 stocks to trade on the eToro platform. 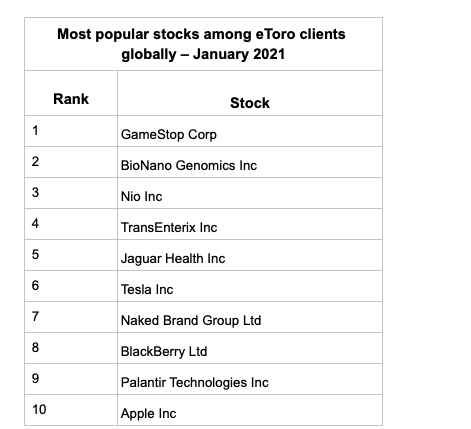 Commenting on the top ten for January, Gil Shapira, adds: “Markets were incredibly volatile towards the end of January, and that is reflected in the top ten most popular stocks for the month, which includes some names related to the latest events in the market.

“However, we continue to see eToro investors adding big names such as Amazon, Facebook, and Microsoft to their current holdings in sufficient volumes to place these stocks among the most popular on the platform month-on-month.

“While it is always important to invest responsibly, investors should pay particular attention to their actions now, when share prices are so frothy. This is the time to stick to the basics and ensure your portfolio is properly diversified.”

eToro was founded in 2007 with the vision of opening up the global markets so that everyone can trade and invest in a simple and transparent way.