In September 2018, a reshuffle of the S&P 500 in the US saw the emergence of the S&P Communications Services index, facilitated by the amalgamation of certain companies from other industry groups whose operations were recognised as aligning more closely with a telco than their previously dedicated sector.

Given this has been mirrored in a restructuring of the Australian S&P/ASX 200 indices, it is well worth examining what it means for investors, especially now that definite trends can be observed.

In Australia, the S&P/ASX 200 Telecommunications Index (ASX:XTJ) was dominated by index heavyweight Telstra Corporation Ltd (ASX:TLS) which has a market capitalisation of approximately $42.7 billion.

Consequently, it still has plenty of clout, but before the index reshuffle there were only a handful of other pure telco network operators that made up the sector, notably Vocus Group Ltd (ASX:VOC), TPG Telecom Ltd (ASX:TPM) and Spark New Zealand (ASX:SPK).

Now Telstra has been joined by companies that have previously been under the media and IT banners, including News Corporation (ASX:NWS), Nine Entertainment Company Holdings Ltd (ASX:NEC) and REA Group.

Before sizing up the profound impact of this reshuffle in terms of index performance, it is worth examining the rationale behind this initiative and how it played out in the US.

Taking the FAN out of FAANG

Big names such as Facebook Inc. and Alphabet Inc. (Google) were transferred from the technology index to the communications services index, joining traditional telcos such as AT&T Inc. and Verizon communications.

In other moves, Walt Disney Co. and Netflix Inc. were shifted from the consumer discretionary index to the communications index.

The high profile nature of the reshuffle not only created intense interest in a sector that had previously been better known for stability and yield than capital gains, but because of the large size of the companies there was a significant increase in the weighting of the new sector as opposed to the previous telco sector.

For example, Goldman Sachs estimated at the time that the combined market capitalisation of Facebook and alphabet was US$1.3 trillion, which would together account for 45% of the weighting of the communications sector.

The following graph shows the substantial impact that the move had in terms of diluting the S&P Information Technology and Consumer Discretionary sectors, while establishing a much stronger communications services sector than was traditionally the case with the telco industry group. 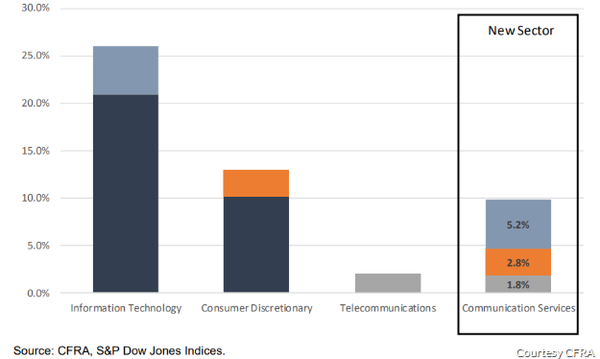 The new sector includes both companies that facilitate communication operations, as well as ones that offer the content and information that is spread through various media.

She also noted that the sector would now be characterised by a more cyclical group of stocks with lower yields, a stark contrast to the defensive nature of the previous telco group.

Putting a finer point on it, the CFRA estimated at the time that the telecom sector offered a dividend yield of 5.4%, well above the 1.75% offered by the S&P 500.

By comparison, the group estimated that the prospective yield of the communications sector would be 1.7%, making it less attractive to income-seeking investors.

Conversely, the sector has become much more compelling for investors with a focus on growth stocks.

The strong growth profiles of digital media and advertising stocks which is reflected in their high PE multiples is a notable characteristic of the new look index.

The following list from Bell Potter highlights the big players in the index. 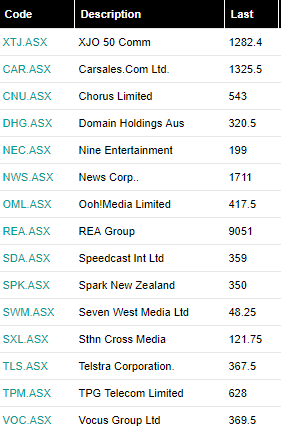 The black line represents the S&P/ASX 200 index which incorporates mainly blue-chip stocks across all sectors.

Dragging the chain is the financial sector (XFJ-Green), having been beaten down due to many factors despite historically being home to some of the best performing stocks over the last decade or so - the mum and dad household names of the ASX.

It has tracked the broader ASX 200 index which is pretty much par for the course.

Healthcare has traditionally been a defensive sector because of the essential services nature of the industry.

However, stocks such as CSL (ASX:CSL), Cochlear (ASX:COH) and Sonic Healthcare (ASX:SHL) have grown rapidly over the last decade or so, providing the sector with a good mix of growth and resilience.

It is important to note though that outside the high-tech developers such as CSL and Cochlear, the growth that was harnessed largely came from consolidation within various sectors.

The likes of Ramsay Health Care (ASX:RHC) led the way in buying up hospitals, and Sonic Healthcare employed the same strategy in the medical diagnostics, radiology and pathology services industry.

With opportunities for acquisition led growth much more limited these companies are relying on more defensive qualities as they benefit from a highly competitive position and strong market share, in a perfect world providing them with predictable incomes and steady growth.

Consequently, it isn’t surprising to see the Health Care Index (XHJ-blue) only just outperforming the XJO.

As we mentioned, Telstra Corporation (ASX:TLS) and a small clutch of other telco network owners and distributors used to shape what was a very defensive sector, characterised by consistently strong dividends from the likes of Telstra, complemented to some extent by smaller telcos that were growing off a low base, usually through industry consolidation.

However, the emergence of high growth companies (REA, CAR, DHG) that are breaking new ground in digital media and advertising have provided significant growth momentum, evidenced by XTJ’s gain of approximately 25% over the last 12 months.

While running the ruler across the stocks in the XTJ index will show mainly strong performances across the board, in terms of finding emerging players in the sector investors will need to step outside larger players.

In doing that, it is worth bearing in mind not just emerging stocks, but emerging forms of media, communications and advertising.

Just as there has been a monumental shift in stocks that are now considered telcos, there are companies using new methods of communication, particularly in social media and the fast moving influencer market.

Even companies that are probably considered tech enterprises due to their success with artificial intelligence, in many cases this is being employed by telcos, social media giants and the influencer industry - effectively, they are providing communications services.

Next week we will identify some of the stocks that fit this category, hopefully highlighting some companies that are flying under the radar that will be the growth stories of tomorrow.