It was August 9, 2019 when the S&P/ASX All Ordinaries gold index hit an all-time record high of 8730 points, up from roughly 5500 points only three months earlier.

While one could argue that this was a bubble, the resilience of the gold price certainly indicates that the index should be well supported, particularly given recent gains.

Consequently, the retracement in the index to around 6200 points towards the end of December appeared to be an overreaction to what could only be considered as a slight softening in the price of the precious metal.

Given the minimal deviation from US$1500 per ounce supported the 8730 point of the XGD, the significant retracement in second half of 2019 appears unjustified.

But now another chapter has been written with the gold price surging past US$1600 per ounce in the last week as indicated below. 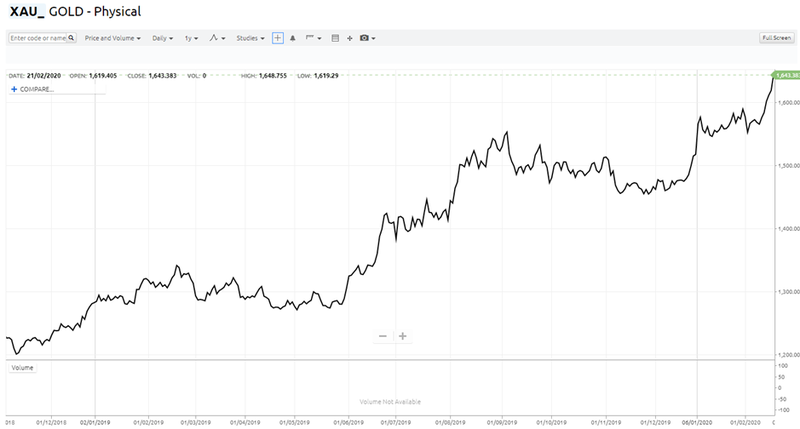 Bearing in mind that the all-time gold price high of about US$1920 per ounce which was struck in September 2011 occurred within a month of the precious metal hitting US$1650 per ounce.

While we are yet to see whether the XGD will eclipse last year’s record high, the sentiment towards gold stocks couldn’t be stronger.

With the US presidential election no longer looking like a one horse race following the surge in support for Bernie Sanders there will be significant uncertainty regarding the country’s political outlook, particularly given the polarising policies of Trump and Sanders.

Coronavirus is also having an impact.

According to Ian Lyngen, head of U.S. rates strategy at BMO Capital Markets, “It’s difficult to imagine a scenario with a compelling ‘all clear’ on the COVID-19 virus in the near term, but things can/will get much worse before getting better. That asymmetry will govern trading conditions this week and makes it difficult to sustain any cheapening in safe-havens.”

Interestingly, disturbing economic data has also emerged from the US which indicates waning business confidence, and this along with global uncertainty has resulted in the volatility index increasing, as well as bond chart trends aligning with those that proved to be useful forward indicators ahead of previous recessions.

While the XGD has responded positively, up more than 4% as it hit a high of 7750 points on Monday, it could be argued that a new record may not be far away.

Indeed, it should be noted that even at current levels the index remains some 1000 points below last year’s high.

Another metric to throw into the mix is exchange rates.

The US$1500 per ounce gold price we referred to in August last year equated to an Australian dollar gold price of about $2200 per ounce based on the exchange rate of US$0.68.

The exchange rate has now fallen to approximately US$0.66, effectively enhancing the Australian dollar gold price which now sits at about $2510 per ounce.

Given that many of the companies that make up the XGD are Australian producers, one would expect their share prices should reflect the improved earnings that theoretically are likely to be generated courtesy of a $300 per ounce increase in the gold price.