The Mongolian oil and gas sector is attracting attention this month with two exploration companies embarking upon drilling programs.

AIM-quoted Petro Matad (LON:MATD) could be on its way to delivering a Mongolian oil discovery in just over a month with the spud of its Heron-1 exploration well. While over on the ASX, Elixir Energy (ASX:EXR) is all set for its upcoming initial drilling at its 100% owned Nomgon IX coalbed methane PSC, with all approvals now in place and a drilling contractor selected.

Both projects are located along the Mongolia-China border and have potential to deliver much needed energy to the region. And interestingly, each of these companies have links to multinational oil and gas company BG Group which was acquired by Royal Dutch Shell (LON:RDSA) in 2016 for £36 billion (US$53 billion).

Petro Matad is currently spudding its Heron-1 exploration well, targeting a prospect with 25MMbo of ‘mean prospective recoverable resource’. MATD’s plan is to drill to a total depth of 3050 metres — taking up to 40 days to complete.

As it progressed towards last week’s spud, the now £55.76 million capitalised Petro Matad delivered shareholders a gain of approximately 375% over the last six months, an impressive increase since its December 2018 lows.

There could be more gains to come as the company progresses its exploration program.

Heron-1 is an appraisal of the T19-46 oil field immediately to the north in Block XX, and is being drilled by the DQE International 40105 rig.

The well is in the Tamsag Basin of Block XX — a PSC issued by the Mongolian government. Petroleum exploration and production in Mongolia are performed solely under a Production Sharing Contract (PSC), signed over each block between the investor and Government of Mongolia.

In the event of a discovery, Petro Matad will bring in a separate rig for testing. Once drilling operations are complete, the rig will move to the Gazelle-1 location, approximately five kilometres away. A call-off testing contract has been signed, meaning testing operations can commence soon after discovery.

The company's second contracted rig is being mobilised to the Red Deer-1 location with a spud targeted by the end of July.

Along with the 10,340km2 Block XX in the far eastern part of Mongolia near the Chinese border, the group’s assets consist of two other PSCs — the Bogd Block IV and Ongi Block V, which are adjacent to each other in west central Mongolia totalling approximately 50,000km2. 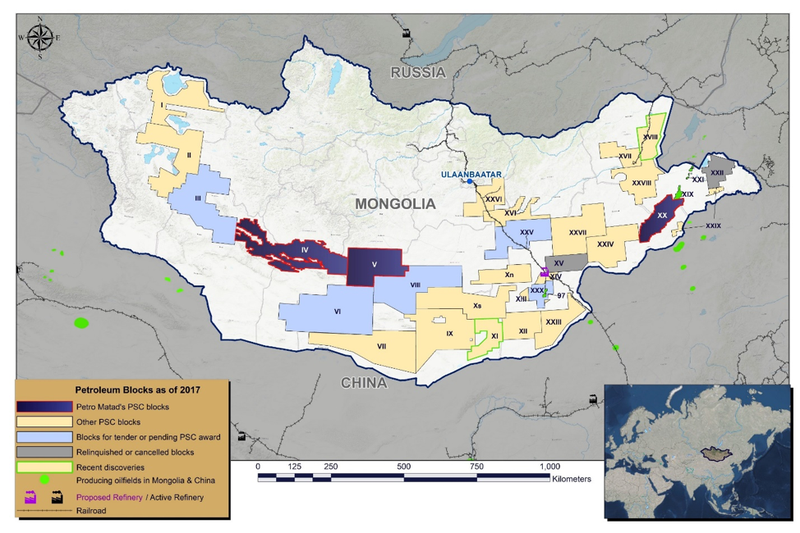 Back in 2015, the UK’s own BG Group entered into a farm-in deal with Petro Matad ­— a major vote of confidence in Mongolia. However, following Shell’s mega £36 billion acquisition of BG Group it had to slim down non-core assets so exited the region and the working interest held by BG Group reverted to Petro Matad.

China is desperate for gas. As I reported last week, the country is taking steps to reduce its emissions and cut its reliance on coal, yet it requires a clean energy source to take up the slack.

Since 2013, the country has been waging a “war on air pollution”, with the aim of replacing coal with natural gas for both residential heating and in industry. However, domestic and regional gas producers can’t keep up with the rising demand so the country is having to rely on expensive LNG imports.

And the situation only going to get worse. China’s gas demand is forecast to expand by 30 to 40 billion cubic meters (bcm) this year, in part due to China’s ongoing policy to move away from coal to gas, and over the coming 15 years gas demand is expected to increase three-fold.

China has tried to secure local supply — upping its pipeline gas imports and lifting domestic gas production, but LNG imports to China are still expected to rise by another 30% from the approximately 73 bcm imported in 2018 to an anticipated 95 bcm in 2020.

Like China, Mongolia is facing a carbon emissions crisis.

In the country’s capital, Ulaanbaatar, the smog is inescapable. Pollution readings are often dozens of times beyond recommended limits. Levels of “PM-2.5” — the tiniest and most dangerous airborne particles — have been known to hit 133 times the World Health Organization’s suggested maximum.

As a signatory to the Paris Agreement on climate change, Mongolia is committed to meeting no less than 50% of its power needs from environmentally friendly and renewable sources.

This includes using coal bed methane (CBM) — an environmentally friendly and ecologically clean source of energy and the utilisation of CBM to provide cheap and clean energy in the country has real potential given there is strong support at the policy level.

While Mongolia currently has no gas production, that could soon change.

The Mongolian Government issued a coalbed methane (CBM), or coal seam gas (CSG), PSC to Golden Horde Ltd. in September 2018, before the company was acquired by Elixir Energy (ASX:EXR) in December 2018 through a back-door listing process.

The PSC was signed with the sole purpose of building a CBM project in Mongolia in an area adjacent to the existing gas markets of Northern China.

With a market capitalisation of just A$30 million, or £16.3 million, Elixir is gaining traction as it gears up for initial drilling that’s expected to get underway in September.

Like Petro Matad, Elixir shareholders have done well recently, with the company’s share price up 85% (on strong volume) over the past month in the lead up to the company’s initial drill. 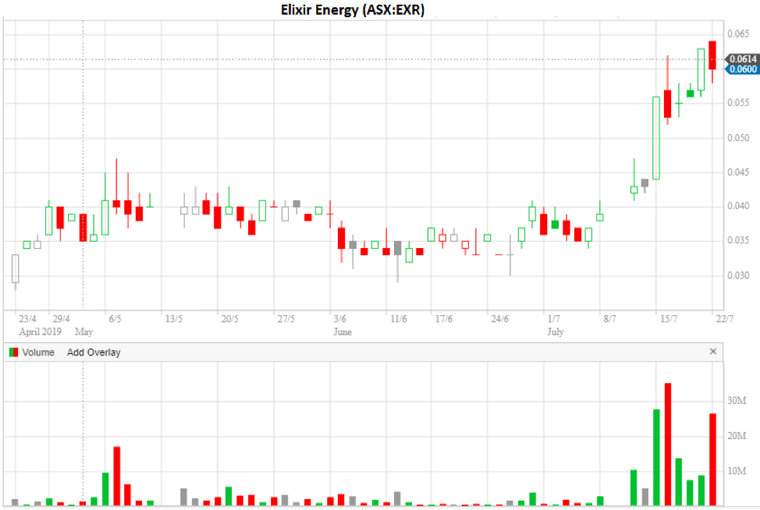 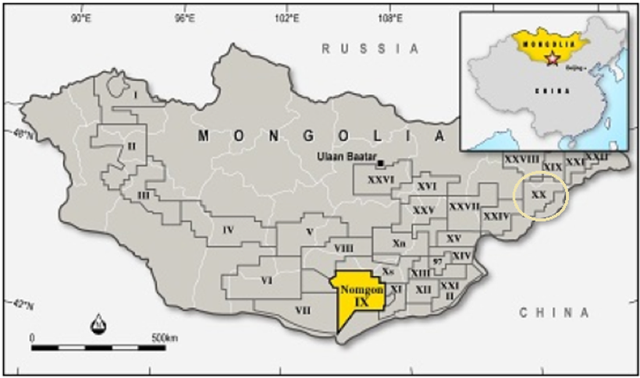 Elixir’s initial exploration program is fully funded, all government approvals received, a seismic contract has been signed, a preferred drilling contractor has been selected, and the stage is set for drilling at the Nomgon IX CBM PSC within a few months.

Elixir awarded a tender for its upcoming drilling program to Mongolia’s Erdenedrilling LLC, and the pair is now finalising a binding drilling services contract with a view to executing this within the next few weeks — paving the way for the company to commence its drilling program.

In determining an initial Contingent Gas Resource, this initial drilling program will test for presence and thickness of coal, gas content, gas composition and permeability.

The results from that program will serve to significantly reduce technical risks and advance the process of converting resources into reserves. They will also serve as a platform upon which to build a 2020 pilot drilling program which is planned to include de-watering and production testing.

Elixir expects that by the end of this year it will have undertaken enough work such that it will be looking to start to establish contingent resources in the PSC.

The company’s ability to quickly progress the project can be attributed to the extensive executive experience behind the board, which includes former managing director of Queensland Gas Company (QGC) Richard Cottee as non-executive chairman.

Cottee steered QGC from a A$20 million junior to a A$5.7 billion takeover, coincidently by BG Group, and is now owned by Shell. He has a vast corporate and operational experience, plus comprehensive knowledge of doing business outside Australia.

Elixir’s Managing Director, Neil Young, has around eight years’ experience in Mongolia and served as Santos Ltd (ASX:STO) Business Development Manager where he was heavily involved in building up its CBM business.

The A$14.6 billion (£8.2B) capped Santos is a leading Asia-Pacific oil and gas producer — Australia's second largest independent producer. Another ex-Santos executive, who ran the company’s coal seam gas (CSG) business, is Stephen Kelemen now too on the Elixir board.

If Elixir is able to prove up its ERCE-validated resources, determining an initial Contingent Gas Resource, and follow through to production, it has ready markets to serve in Mongolia and China.

There’s also potential to supply the Rio Tinto (ASX:RIO) operated Oyu Tolgoi Copper Mine which sits with Elixir’s PSC area and is in need of a reliable and local energy source. Rio, the $60.7 billion capped mining giant, is under increasing Mongolian government pressure to find an energy supply from within Mongolia’s borders instead of bringing it in from China, and EXR could be the likely supplier.