The weird and wonderful world of Mining has been through the proverbial meat grinder in recent years — and lived to tell the tale.

According to Pricewaterhouse Coopers, the world’s leading accountancy and corporate finance firm, the Mining sector is “slower, lower, weaker — but not defeated”. PwC publishes an annual status check report of the Mining sector as a whole, and each year, the report’s title gives a good insight into true sentiment in the sector. 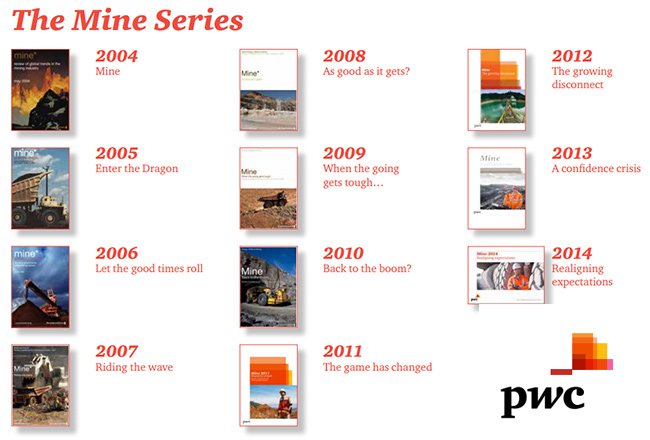 Aggregated together, the world’s top 40 mining companies have been left hurt and bruised by the commodity ‘bust’ that followed the ‘boom’. Of the 40 companies, two filed for bankruptcy over the past 12 months while all 40 saw their shareholder dividends slashed alongside huge reductions in capex and over $200 billion in cumulative write-offs. 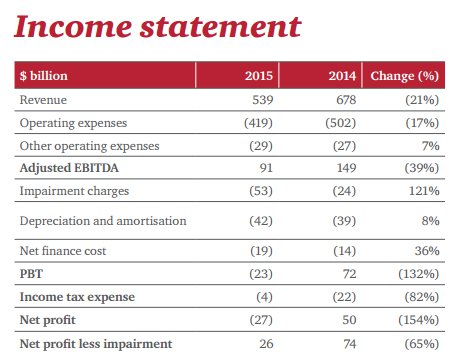 The fundamental reasons behind the downbeat assessment are well known amongst Mining investors, and with much of the negativity now firmly priced in, PwC sees a strong chance of the protracted commodities decline, finally beginning to turn.

In a recent overarching report on the core of the world’s mining sector, as represented by the largest 40 Resources companies, PwC found the globe’s 40 biggest miners made a collective loss of $US27 billion (A$37 billion) in 2015. This was the first loss that weighed on the entire industry with the big players suffering most, hit by China’s slowing economy and a 25-40% fall in commodity prices last year.

PwC estimates that the market value of the world’s top 40 miners, fell 37% to equal US$494 billion in nominal terms, thereby erasing all the gains from the Australian mining boom, loosely ascribed to the period between 2009 and 2014.

Australia’s favourite commodity, iron ore, perfectly illustrates the frayed state of affairs in Mining since 2009. A protracted rise in demand for industrial commodities and metals led to rising prices for most commodities. But the boom period lasted barely 5 years before oversupply and waning global demand began to weigh on prices.

PwC sees the commodities cycle as following its normal expected pattern with the big miners switching away from new exploration, and focusing on more efficient production at lower cost. In other words, consolidation and doing better with what they already have.

Mature mining companies are now forced to take-on tougher deposits, found at greater depth or with additional processing required, which effectively means they are working harder just to remain where they are. One of the biggest surprises from the PwC report is the finding that productivity among the top 40 miners rose, despite the sharp falls in commodity prices.

“Commodity prices have broadly fallen by around 25%, but the market caps of the big miners have fallen by over 50%” said PwC Mining Leader Chris Dodd, via a webcast broadcast by PwC. “The Mining industry is in uncharted territory” he added.

Digging down into exactly why such a heavy impact on big miners has occurred, and how this could effect future Mining activity, PwC says that, “Investors are punishing poor allocation of capital and inefficient capital expenditure. As exploration falls, future sustainability of the industry is now coming into question”.

For the time being in 2016, we’ve seen a sharp reversal in commodity prices but with the unwanted caveat of heightened volatility. PwC says it’s still “premature” to call 2015 the bottom. 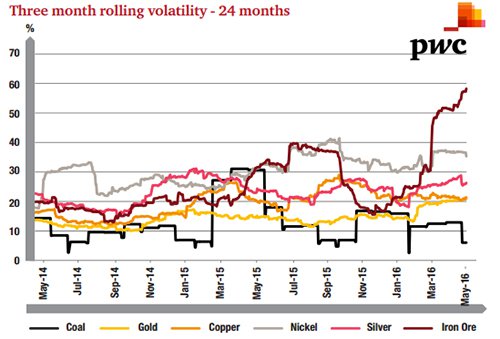 PwC concluded that Mining is not defeated just yet, “It is within the power of the Top 40 to rebuild their investment propositions and rise off the canvas. But if there is one thing that 2015 has shown, it is that the foundation cannot be as dependent on China”.