The Diggers and Dealers crew have defied the odds, staging their 2020 mining forum, normally held mid-year, between Monday and Wednesday of this week.

Always an extremely well attended event that is held in Kalgoorlie each year, the colourful presentations and nightlife are in stark contrast to the arid but rich lands that surround the town.

It is also a week in which companies get to show their wares, often a period in which there are market moving announcements, often leading to strong share price performances.

Rather than cherry picking a few companies to consider in detail we have provided a wrap of most companies that presented on each day.

It was appropriate that Northern Star Resources (ASX:NST) and Saracen Mineral Holdings (ASX: SAR) should be the first two companies to present as they just last week announced a proposed merger of equals that should see combined annual production of 2 million ounces from three tier 1 production centres by fiscal 2027.

Their combined annual production is already an impressive 1.6 million ounces.

With resources of 49 million ounces and reserves of 19 million ounces, the implied market capitalisation for the combined entity is in the vicinity of $16 billion.

Saracen has a strong production profile including high-grade operations in Australia while Northern Star brings a new dimension to the group with its North American Pogo operation is expected to account for production of 300,000 ounces per annum.

However, the Kalgoorlie region is expected to account for at least 50% of production with the inclusion of Saracen’s 250,000 ounce Carosue Dam operation expected to bring group production in that region to more than 1 million ounces.

From a broader perspective, this transaction should create a top 10 global gold producer with high margin assets located exclusively in tier 1 jurisdictions that aren’t prone to sovereign risks.

Mincor Resources (ASX: MCR) was next to present, and it is worth noting that the company has traded strongly since markets began the recovery in March with its share price more than doubling from about 40 cents to a recent high of 95.5 cents.

The emerging nickel producer now has a financially robust DFS, ore reserves of 71,000 tonnes of contained nickel and cash of about $100 million.

The company is forecasting first nickel concentrate in the March quarter of 2022, ramping up to 16,000 tonnes per annum nickel production.

The group’s assets are in the highly prospective Kambalda region, and new discoveries are being made at Cassini Main and Cassini North. 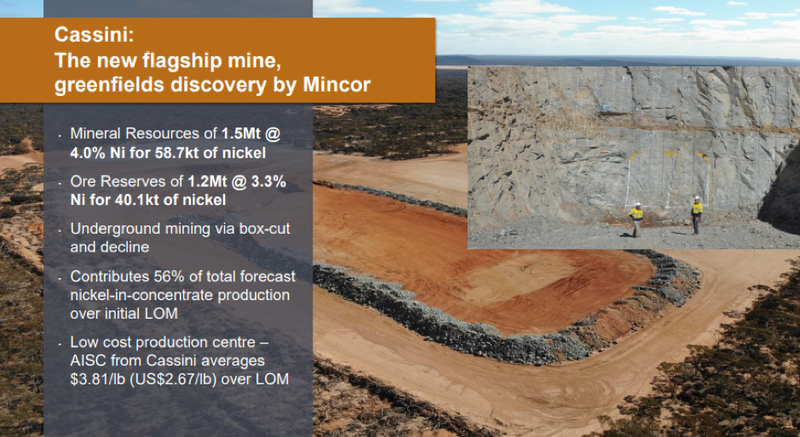 The nickel price is also working in Mincor’s favour, having increased from about US$5.00 per pound in March to push above US$7.00 per pound in September, and it is currently hovering in the vicinity of its US$6.80 per pound.

It is worth noting that the high point for the metal over the last five years has been about US$8.00 per pound, and there are good margins on offer at the current price.

Ramelius Resources Ltd (ASX: RMS) presented just before the lunch break, and it was evident that its Edna May and Mount Magnet producing mines in Western Australia are performing well.

The group presents as a growth by production story with mid-range guidance of 270,000 ounces in fiscal 2021 well above 2020 production of approximately 230,000 ounces.

Management also expects to maintain costs at reasonable levels in 2021 with mid-range AISC guidance of $1280 per ounce.

Bear in mind that the current Australian dollar gold price is pushing up towards $2700 per ounce, implying strong margins for a company such as Ramelius.

There is upside potential from both the Marda Gold Project and the Tampia Gold Project, also located in the south-western corner of Western Australia with the former just north of Edna May.

The Penny project is just as exciting as it is shaping up as one of Australia’s highest grade gold mines with an ore reserve of 500,000 tonnes at 14 g/t gold for 230,000 ounces.

A much anticipated feasibility study should be completed at the end of October.

Tietto Minerals (ASX:TIE) presented after lunch with the company highlighting what lies ahead at its Abujar Gold Project in Côte d’Ivoire.

It features a 2.2 million ounce gold open pit opportunity with multiple catalysts likely to occur over the next 12 months.

The PFS should be completed by March 2021, followed by a definitive feasibility study (DFS) in the September quarter.

The company is well funded with cash of more than $60 million which will assist in accelerating its exploration program, underpinning a resource update later this month.

Importantly, the deposit is situated along trend from several other major deposits and multi-million ounce mines in Côte d’Ivoire.

This is a factor that hasn’t been lost on the market and has no doubt contributed to the company’s strong share price performance which increased from 12 cents in March to a high of 76.5 cents in July.

The recent retracement appears to be a function of negative sentiment towards equities markets and a slight pullback in the gold price, suggesting it may represent a buying opportunity.

OreCorp Ltd (ASX:ORR) was next cab off the rank, and the company has been making steady progress at the Nyanzaga Gold Project in north-west Tanzania.

Coronavirus has slowed down the important DFS, but the PFS looks impressive with forecast average production of 213,000 ounces per annum over a 12 year mine life.

This would come from a combined open pit and underground operation with moderate upfront capital costs of less than US$300 million.

The impressive AISC estimate of US$838 per ounce implies a healthy margin of about US$1100 per ounce based on the current spot price.

The company’s other asset is the Kilimani gold deposit that lies 450 metres to the north-east of Nyanzaga.

Kilimani has a mineral resource estimate of 5.6 million tonnes at 1.2 g/t gold for 220,000 ounces of gold, and the project offers considerable exploration upside.

The company’s shares have more than doubled since March, but completion of the DFS could provide further share price momentum.

The group is in the process of developing the Jaguar Nickel Sulphide Project.

Centaurus has a strong resource to work with which features 517,500 tonnes of nickel metal, including a high-grade resource of 20.6 million tonnes at 1.56% nickel (indicated and inferred).

The company will be undertaking 75,000 metres of extensional and step-out drilling over the next 15 months, and a scoping study targeting a long life, sustainable source of Class I nickel is advancing well.

As previously mentioned, the nickel price is trending strongly, providing an ideal backdrop for Centaurus which has experienced a near 10-fold share price increase since March.

Exploration opportunities abound, suggesting Centaurus’ share price could continue to benefit from positive newsflow during the remainder of 2020 and throughout 2021.

Bardoc Gold Ltd (ASX: BDC) rounded off the day with management underlining that the group’s Bardoc Project would be one of only a handful of Australian +100,000 ounce per annum gold projects to come on stream over the next two years.

Management didn’t have far to come for the conference as Bardoc has a 250 square kilometre tenement package 40 kilometres north of Kalgoorlie.

With a resource of approximately 3 million ounces and a reserve of 790,000 ounces the company is well-positioned to progress to production.

The group is targeting production of more than 135,000 ounces per annum from an underground and open pit operation.

At this stage, studies point to production of 1 million ounces over a period of nearly 8 years at life of mine AISC of $1220 per ounce, implying margins of about $1450 per ounce.

One of the striking features of this project is that upfront capital expenditure is only $140 million, and given that the group had $30 million in cash at the end of the quarter financing should not be an issue.

Management expects the DFS to be completed by the March quarter of 2021 with a final investment decision to be made in the June quarter.

There is plenty of experience in the management team which has been involved in projects run by Pilbara Minerals, Norton Goldfields and Barrick.