When is a miner a ‘green’ stock?

Can lithium miners be considered a ‘green’ stock? As it turns out, kind of.

Unless you’ve been hiding under a rock in recent times, you would have noticed that a slew of lithium miners are cropping up to take advantage of an expected supply/demand imbalance driven (quite literally) by Tesla and others’ lithium-ion batteries.

Aside from Tesla, a slew of Chinese manufacturers have joined the race to produce as many electric cars as possible – spurred on by a government getting serious about climate change.

While Tesla’s much-hyped 35 GWh Gigafactory has the potential to double the world’s demands for lithium, China is adding 52GWh of new capacity as well.

The unprecedented demand side is driving the expected price of lithium through the roof.

Below is just one estimate of the demand side. 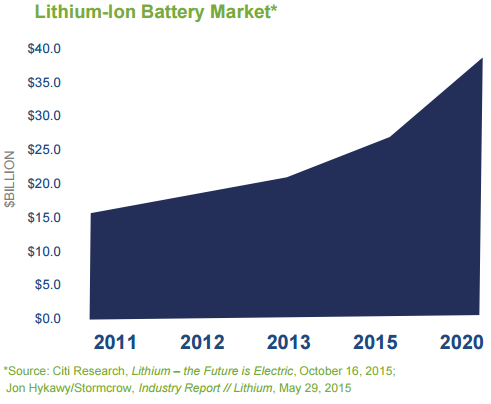 Normally a miner would simply point to the supply/demand dynamics at play, but lithium hopefuls have also been able to add another number to their repertoire – they’re green plays.

Because of lithium’s role in lithium-ion batteries, lithium miners have been claiming that they could be construed as a green investment.

This is because lithium-ion batteries are also being used in solar storage projects.

One of the key things holding solar power back is that a lot of energy is lost at night and in cloudy conditions, but what if you could take excess power generated during peak times and store it in a giant battery?

It’s been tried before, but the batteries were not sophisticated enough to store the maximum amount of energy needed to do things like power a home or a car.

Driven by gains from tech companies such as Tesla, we’re now standing on the precipice of a world where powering a home via battery is a near possibility.

The process, however, of digging up and processing lithium can be extremely dirty.

With a few notable exceptions (Lithium Australia, for example), a lot of lithium processing includes roasting of ores – a hugely energy intensive process.

If this process is powered by fossil fuels, does this offset the potential net zero gain from the lithium-ion battery that lithium will be in?

Nobody has yet conducted a life-cycle analysis, so it’s a difficult thing to try and pinpoint.

It’s why a lot of lithium plays are able to claim that they are a green stock by simply pointing to the role lithium will play in de-carbonising the electricity grid.

The question is can they credibly claim this?

As it turns out, kind of.

Australian Ethical is a superannuation fund with the sole purpose of making sure dollars under its purview go towards green and sustainable sectors.

Head of ethics research Stuart Palmer told Finfeed that on the surface of it, the fund would be open to investing in lithium miners.

“Although we don’t currently invest in the mining sector, our Ethical Charter would allow us to invest in lithium mining companies which appropriately manage their social and environmental impacts,” Palmer said.

“This is because of the crucial role lithium plays in expanding battery energy storage needed for the transition from fossil fuel to renewable energy.”

Its charter explores things like what role the proposed mineral plays in society and whether the mining of the mineral harms the environment.

Although lithium mining literally involves digging a giant hole in the ground and processing, its end use made lithium a compelling case to be considered a ‘green’ mineral.

“We look not only at the potential positive uses of the mineral, but also whether the amount required for those positive uses could be met from higher levels of recycling and reuse of previously mined material; or whether there are alternative, more sustainable materials which can fulfil the same function,” Palmer said.

“As a result of this analysis we generally avoid investment in the mining sector – but with potential exceptions as in the case of lithium.”

They added, however, that it did not have a dedicated sustainable options manager for the small cap space, but its Global Environmental Opportunities investment product did have a small exposure to lithium.

If any companies or individuals are in a position to rule in or out what’s ‘green’ or not, it’s the people and funds putting dollars into green opportunities.

If they deign lithium to be a green option (with caveats), it would seem that lithium miners do have a legitimate claim when they claim to be green companies.