Last week I wrote about the coming EV revolution. Whilst we won’t cover that same ground today, I thought it would be interesting to point out that General Motors bought an 11% stake in electric vehicle maker Nikola Corp this week.

It just goes to show, how rapidly the EV revolution is moving, as well as the market’s interest in it.

Of course, the market has other interests as well. Notably, it’s been hungry/thirsty for tech stocks, even though this week tech stock volatility was its highest.

According to Josh Gilbert, analyst at eToro, “Names such as Apple, Microsoft, Facebook, Google and Amazon are continuously the top traded stocks by Australian investors at eToro, as they are looking for names that they can trust, whilst seeking better returns from their savings compared with leaving funds in a savings account that may not even combat inflation.

“The average return from the top five US stocks mentioned above is 54 per cent year to date (YTD). Compare that to the top 5 market cap stocks in Australia where, on average, the return is -8.58 per cent, then gone are the days where investors look to pick Mum and Dad stocks. With the development of tech worldwide, investors are able to invest into the future of this sector without having to take a huge risk on small start-ups.” 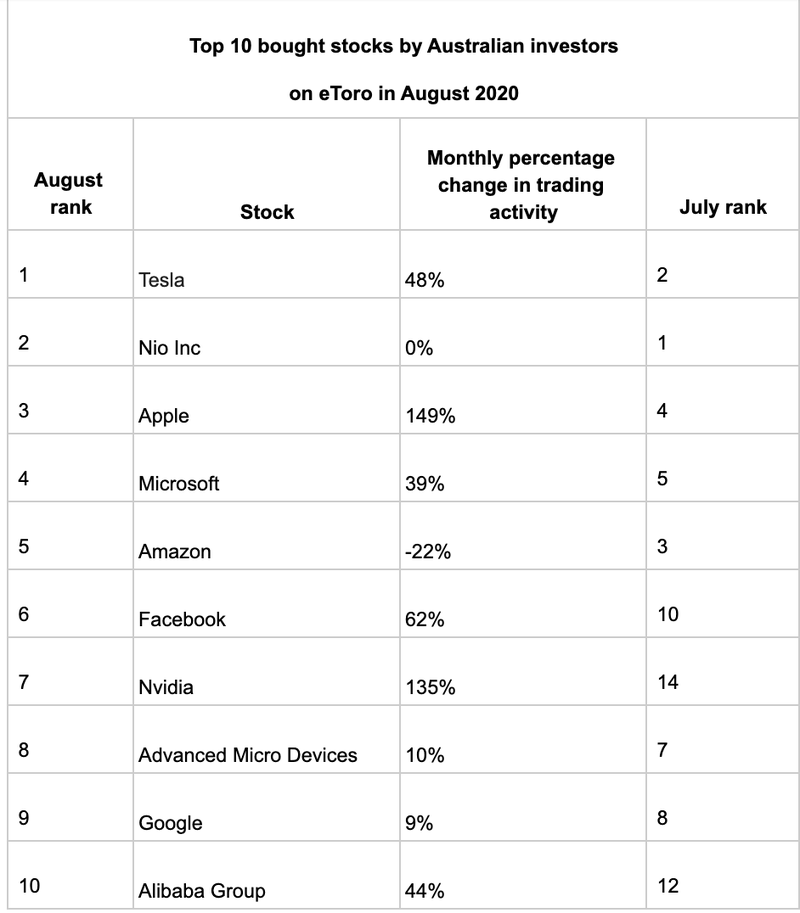 The $346BN capped Tesla raced ahead once again in August, with a 48 per cent increase in trading from July and no wonder, as the share price was up another 59 per cent in August. The stock has become increasingly popular with millennial investors as they look to invest in the ‘future’ of electric vehicles. In August, Tesla completed a stock split, which seemed to excite investors as the share price jumped 12 per cent on the last day of trading in August. The stock split was initiated to lower the price per share of Tesla, therefore making it more attractive for retail investors to purchase. It is usually a psychological factor for investors to see a lower price as they tend to believe this constitutes more growth. 2020 has been a remarkable year for Tesla.

The $24.1BN capped Nio continues to provide an alternative for Australian investors who feel they may have missed the boat on Tesla. Nio recently sold 88.5million shares at $17 a piece, raising more than $1.5 billion in capital. The company is headquartered in Shanghai and is looking to continue expanding in China, where Tesla seems to be enjoying much of its success too. Electric vehicle makers have been among the hottest picks of the stock market this year. Nio’s earnings in August were also strong. Vehicle sales increased by 147 per cent compared with the same month last year and its revenue increased by 171 per cent in Q2 compared to Q11. This positive report will boost investors’ confidence in stock moving forward.

The $1.97TN capped Apple continued its bullish run in 2020, with another strong month in August. The tech giant rose 23 per cent in August, after also completing a stock split at the end of the month. Apple finalised its fifth stock split, reducing the price 4-1. Apple rallied 3.5 per cent after the stock split was completed in late August. Its recent earnings report shows the technology giant has recovered well since its early struggles at the start of the pandemic and went on to become the first two trillion-dollar company in August.

Both have rallied ever since the coronavirus pandemic began as consumers continue to shop online. Alibaba smashed through its earnings report in August, with huge growth in the cloud sector, sending the stock up 15.5 per cent in August. The cloud sector is a trending market at the moment and both Amazon and Alibaba are focusing their efforts on these products accordingly. Investor sentiment for Alibaba in Australia is strong, as many see the company as a great alternative to Amazon. News from Amazon in mid-August reported that it would add thousands of jobs around the US, which sent the share price up 4.5 per cent and led to its month’s gain of 12.44 per cent.

Both continued their dominant move towards the work from home lifestyle. Microsoft made headlines last month with their bid to purchase the US operations of ByteDance who own the social media sensation, TikTok. Microsoft said it would look to acquire the app from the Chinese media company in order to stop the ban on the app’s US operation from President Donald Trump. Google is continuing to play catch up in the cloud computing sector behind Amazon and Microsoft, but is lucky to be able to generate a large amount of its revenue from advertising. Many investors are optimistic that Alphabet’s advertising revenue will increase again in Q3 after a huge slowdown in coronavirus cases in the US.

The $763.4 billion capped Facebook gained another 17 per cent in August as its subsidiary, Instagram revealed its new feature to rival TikTok. “Reels” was released in early August, as growing privacy concerns over the app TikTok, left consumers looking for alternatives. The launch of its shop integration over the pandemic period proved hugely successful and shows how Facebook can develop in adverse situations. This is just one reason why investors continue to flock towards the social media giant.

Both are now prominent players in the US tech industry and are widely becoming household names with investors. Nvidia’s share price grew 25.5 per cent in August after it released better than expected earnings. The company’s revenue was $3.87 billion, up 50 per cent from $2.58 billion the year prior and its revenue in the gaming sector increased by 24 per cent from Q1. This shows that Nvidia continues to grow in the gaming industry, which has been a huge market since the pandemic started. Both companies enjoyed success mid-August as China announced it would reduce tax breaks for companies that make advanced chips in the country, where both have manufacturing facilities. This helped AMD to gain 18.68 per cent for the month. AMD are fiercely hunting rival Intel, to claim global dominance. An announcement of a new processor being launched boosted investors’ confidence throughout August and with Intel’s failure to deliver its new production, sentiment shows that many Intel traders are looking to jump ship.”

LCL has had a great week. It started on Monday at 7.1 cents, moved as high as 18.5 cents on news that it edged one step closer to a significant gold discovery, with yet another highly promising drill hit of exceptional thick gold mineralisation from surface. The stock finished the week at 14.2 cents, still double where it started. In fact, since May 2020, the company which is leveraged to the rising gold price and possesses quality exploration assets and inherent upside, has been up ~150%.

Vulcan has continued its stellar run of late. Vulcan started the week at 71 cents. On Thursday, it hit the magic $1.00 mark. Went as hard as $1.12, before settling at $1.04. IT’s not too late to catch the bus on this one either, as more is expected from the company in the coming months. Vulcan is aiming to become the world’s first Zero Carbon LithiumTM producer by producing a battery-quality lithium hydroxide chemical product with net zero carbon footprint from its combined geothermal and lithium resource, which is Europe’s largest lithium resource situated in the Upper Rhine Valley of Germany. With the interest in electric vehicles, it seems Vulcan has hit on the right project and technology at just the right time. Not to mention its location right in the heart of Europe’s EV hub. You can read more about Vulcan here.

This Alaskan-based oil and gas explorer finished the week strongly, rising 16.67% on Friday to settle at $0.0070.

This is good news for 88E and its shareholders, who have not had the greatest of years, with unfortunate timing on a number of fronts. The stock was oversold on news back when ‘peak fear’ around COVID-19 was gripping global markets and the oil price was at all-time lows. However, the company has quietly accumulated additional assets holding potential for billion barrel plus oil discoveries. Furthermore, at its Project Icewine, 88E has just upgraded the Net Pay to 398’ from its Charlie-1 well. You can get the full picture of its latest news in the Next Oil Rush article: We Just Doubled Our Holdings in 88E - Find Out Why

So what are the best and worst performing sectors this week?

According to Wealth Within’s Dale Gillham, “It seems that my weekly report is like a record stuck on repeat given that the Australian stock market continues to trade sideways, as it rises some days before falling away. That said, it is starting to decide on a direction, which looks to be down as I have communicated in recent weeks, given that over the last 12 trading days the market has fallen around 4 per cent. Despite the All Ordinaries Index closing higher than it opened 50 per cent of the time in the last 12 trading days, the down days were larger, which indicates weakness in our Market.

“If the down move continues, the All Ordinaries Index will fall to below 5,800 points and possibly as low 5,400 points, although it could go lower. For now, I recommend that investors continue to be cautious and be prepared to exit if the fall is larger and quicker than I anticipate.”