Why mental health days matter – cutting through the stigma

When Madalyn Parker, a software developer in Ann Arbor, Michigan, needed some time off work to focus on her mental health, she let her colleagues know in an email.

CEO, Ben Congleton, responded by thanking her for helping “cut through the stigma” of mental health. 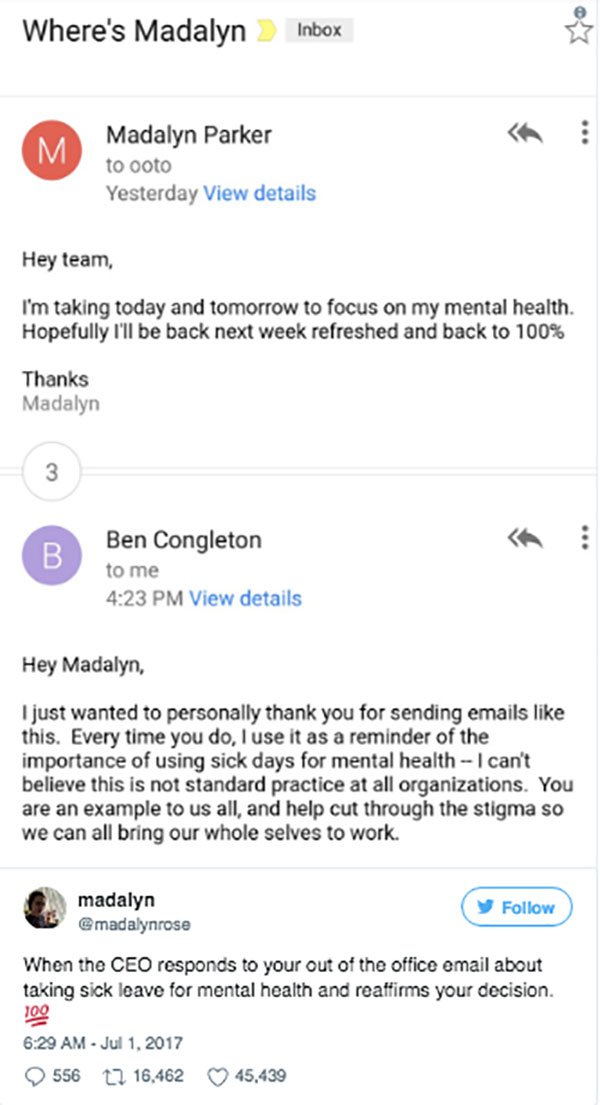 This has since gone viral, sparking discussion about the importance of understanding mental health in the workplace, and how using sick days to treat it can be helpful.

In response, Congleton ended up writing an essay about it.

“It is incredibly hard to be honest about mental health in the typical workplace,” he writes.

“There were so many stories of people wishing they worked at a place where their CEO cared about their health, and so many people congratulating me on doing such a good thing. This should be business as usual. We have a lot of work to do.”

Congleton hinges on an issue that lies at the heart of this kind of dialogue: the not-so-radical idea that mental health days should be treated like regular sick days. Or, in Parker’s own words, the idea that “mental health is health”.

Congleton also puts forward a compelling question – why is it still controversial to talk about mental health in the workplace in 2017?

A corporate culture of silence

Taking a mental health day is far from a new phenomenon. Most of us will have taken one at some point in our professional careers, and it falls more broadly into the increasingly recognised practice of self-care.

According to a recent Beyond Blue report, one in five Australians have taken time off work in the past 12 months because they have felt stressed, anxious, depressed or generally mentally unhealthy.

Yet due to a lack of understanding around mental health issues in both society at large and the corporate space, an open explanation for this kind of sick leave is often purposely omitted.

Despite the fact that one in six working-age Australians are currently experiencing mental illness (most commonly depression and anxiety), and even though being in a healthy mental state is undeniably essential for employees to perform well, corporate culture still stigmatises mental illness.

As Congelton notes, “Even in the safest environment it is still uncommon to be direct with your co-workers about mental health issues.”

In Congelton’s original email response to Parker, he lauds her “bravery in helping us normalize mental health as a normal health issue.”

Central here is the idea that mental health is just as legitimate and real as physical health, and should be taken just as seriously – and in this sense, it’s no different to the flu or a broken leg.

Psychotherapist Amy Morin writes: “If you had a cold, you might decide to power through your workday. But if you had the flu, you’d likely need to stay home and rest — and no one would call you ‘weak’ for getting the flu. In fact, your co-workers would likely thank you for not coming into the office when you’re sick.”

Mental health, however, is rarely regarded with the same respect. “Instead, people are told to ‘get over it’ when they’re struggling with anxiety, depression, or similar issues,” says Morin. “But mental health is part of your overall health. If you don’t proactively address it, you won’t be able to perform at your best.”

When we’re physically unwell, it affects how we function – the same goes for mental health.

However, Morin cautions that although mental health days can be highly beneficial, taking them for the ‘wrong’ reason could backfire and actually leave you feeling worse – for example, if you’re anxious about a workplace issue and want to avoid confronting it.

The costly implications for businesses

Mental illness is now the leading cause of sickness absence and long-term work incapacity in Australia, with mental health conditions like depression and anxiety costing businesses between $11 and $12 billion each year.

In fact, more workers are absent due to stress and anxiety than flu and other physical illnesses or injuries.

The total workplace cost for depression in any one year is estimated to be $8,025 per affected individual, with an estimated three to four days of work lost per month for each employee experiencing depression.

Workers compensation claims for stress-related mental disorders have also increased to $200 million per year in Australia.

Beyond these quantifiable costs are the less visible financial implications of reduced productivity through presenteeism (when someone remains at work despite feeling unwell), high staff turnover and subsequent loss of skills and corporate knowledge, as well as the opportunity costs and reputational risk to business when managers, sales teams and customer service staff are not able to perform at their best.

Of course, the personal costs of mental ill health also take a toll on the personal, family and social functioning of those affected.

Given these figures, it’s clear that addressing mental health and wellbeing openly in the workplace is essential for businesses.

The majority of employees clearly concur that mental health in the workplace is important – an overwhelming 90% of them. However, only 52% believe that their workplace is actually mentally healthy, and just five in ten believe their most senior leader values mental health.

Unsurprisingly, people who consider their workplace mentally unhealthy are also twice as likely to take time off work because of mental health issues.

In contrast, when it comes to workplaces that employees consider mentally healthy, self-reported absenteeism as a result of experiencing mental ill-health almost halves.

A mentally healthy workplace can be seen as one that protects and promotes mental health, and which empowers its employees to seek help when it’s needed – for the benefit of both the individual and the organisation itself.

In this kind of environment, people watch out for each other, managers and teams understand mental health and openly talk about it, and staff with mental health issues are supported in their recovery.

All of this benefits businesses themselves – for one, it’s widely seen that organisations which value mental health are likely to be more productive (72% agreement among employees, 71% agreement among leaders).

Better workplace mental health also improves the bottom line. A 2014 return on investment analysis by PricewaterhouseCoopers found that for every dollar spent on fostering a mentally healthy workplace, there would be a $2.30 benefit to the organisation.

The virality of Parker’s tweet highlights the critical need for open discussion about mental health in the workplace, and also perhaps a growing willingness to do so.

As part of this increase, a number of initiatives, programs and events like World Mental Health Day and National Mental Health Awareness Week and Black Dog Institute’s Workplace Mental Health and Wellbeing Programs have arisen to foster wider community awareness and support, and to help workplaces optimise their approaches to mental health.