Markets hang on to most of the week’s big gains

A lack of news flow in most global markets resulted in subdued movements overnight with the exception of the UK.

The FTSE 100 shed 0.7% or 51 points to close at 7237 points, mainly in response to a strengthening in the Pound against the US dollar. As the chart demonstrates below this trend commenced on Tuesday and accelerated as the week progressed. 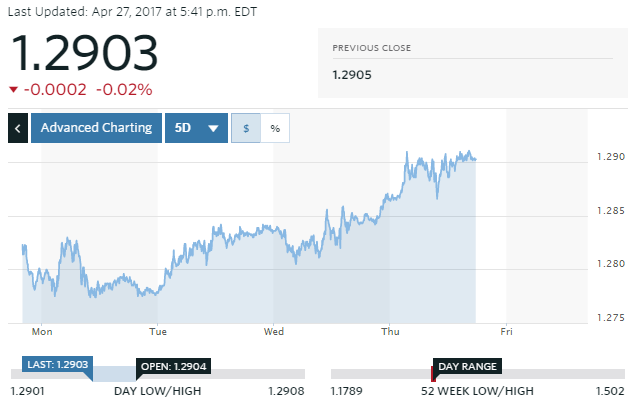 Elsewhere in Europe, the DAX came off 0.2% to close at 12,443 points and the Paris CAC 40 fell 0.3% to close at 5271 points. Once again though, it pays to examine a five-day chart to put these declines into perspective.

As indicated below, both indices surged substantially at the start of the week and the fact that they appear to be poised to maintain most of those gains by the end of the week is a positive sign. 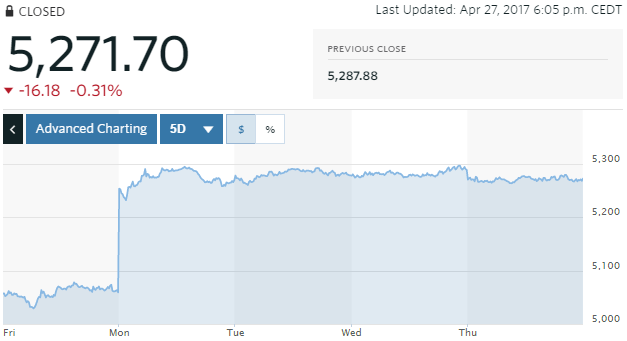 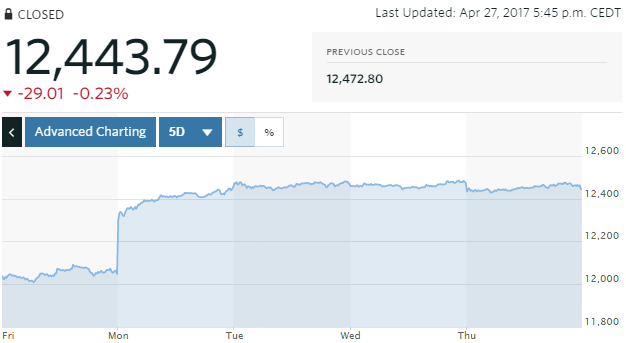 It is a similar story in the US. While the Dow drifted in and out of positive territory during Thursday’s session before delivering a small gain of six points, it is more about the index’s performance over the course of the week.

After closing last Friday at 20,548 points the Dow stacked on circa 450 points in the first two days of trading and even though it has flatlined for the remainder of the week the fact that it has been able to hang onto those gains will be the key takeaway for investors.

On the commodities front, oil continued its downward spiral, falling another 0.7% to US$49.24 per barrel.

Iron ore was relatively flat at US$66.42 per tonne.

Gold fluctuated in and out of positive territory before making a slight gain to finish at US$1265 per ounce.

Base metals were mixed with little movement in the copper price and a slight decline in zinc as it finished at US$1.17 per pound.

However, both nickel and lead gained more than 1% finishing at US$4.20 per pound and US$1.00 per pound respectively.

While the Australian dollar gained some ground during overnight trading, it is the slip below US$0.75 as indicated below that has technical analysts expecting further downside.