Has the market underrated lithium?

The price of commodities has been hit hard over the last couple of years, with the number of small-cap resources companies deciding to pivot into tech plays testament to that.

Key metals such as iron ore, tin, nickel, and copper have fallen out of favour as quickly as their prices on the London Metals Exchange – so juniors have been rushing around trying to find the next big thing.

Those who have stuck fat through the commodities gain have found joy in both graphite and lithium – with both metals’ buzz driving small cap valuations to new levels.

Companies such as Lithium Australia (ASX:LIT) have started to see the benefit of the buzz, with its share price lifting accordingly.

Over the last six months LIT’s share price has risen over 150% to its current price of 15c, although past performance is not indicative of future performance and it’s not guaranteed to continue its run.

LIT is one of a number of companies which don’t yet have production under its belt or an iron-clad roadmap to production, but the company is still attracting investor attention.

The buzz is being determined by one very simple factor: lithium-ion batteries which are touted as the next big thing to drive world energy consumption.

These batteries have the potential to drive huge change in clean energy.

For example, one of the key criticisms of solar energy is that you can’t store it (unless we’re talking massive-scale solar thermal projects) – meaning that if the sun isn’t shining, you’re not going to get a lot of energy out of them.

But, what if you could go ahead and store some of the energy?

It’s been tried before, but the batteries were not sophisticated enough to store the maximum amount of energy needed to do things like power a home or a car.

Driven by gains from tech companies such as Tesla, we’re now standing on the precipice of a world where powering a home via battery is a near possibility.

But, here’s the thing: batteries only really make up about 22% (estimates vary) of lithium use in the market. 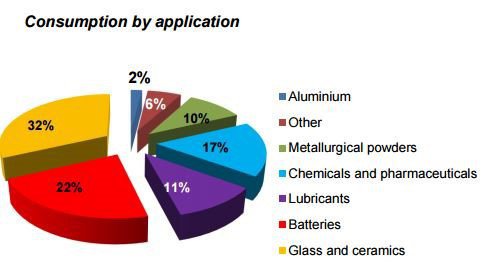 Every time Tesla releases an update on its next model of electric car, or gives a tech demonstration of its Powerwall technology, the buzz ratchets up just a touch.

Articles are enthusiastically written about the technology’s ability to ‘change the game’, despite the technology not quite being there from a pricing point just yet.

It’s an easy story to tell to investors, given the media’s propensity to want to call the next ‘game-changing’ technology.

Somehow we think calling the massive potential for lithium in lubricants doesn’t quite have the same headline-clicking quality than highlighting the material’s potential as part of an ‘energy revolution’.

Companies far and wide are starting to invest in lithium-ion battery production capability – and it’s not just Tesla.

Tesla has started construction on its much-hyped Gigafactory in the Nevada Desert, which is slated to put out the equivalent of 35 GWh of batteries.

Given all of this, it seems a bit odd to ask whether the market has underrated lithium – but when people think lithium-ion batteries they begin and end with Tesla and that’s not where the attention should be.

After all, a slew of Chinese battery manufacturers are coming to the party as well.

Led by Foxconn, out to 2020, it’s estimated that Chinese battery manufacturers will add 52GWh of new capacity, not including the status quo.

A report from the International Business Times recently outlined a growth in the number of Chinese consumers buying electric cars, with drivers lining up to buy three times as many electric cars as they did in 2014.

Now, compare that with Tesla.

It’s historically pretty cagey when it comes to sales figures, but it did say towards the back-end of last year that it wanted to deliver (not sell) 52,000 units over 2015.

While everybody knows about Elon Musk, not everybody’s picking up on the quieter revolution playing out in China.

So in this sense while some of the buzz is effectively pricing in future lithium growth – it’s perhaps not pricing in all of it.

Last week, in the most stage-managed parliamentary session you’re ever likely to see, China outlined its latest five-year plan to the media and its citizens.

The 13th such plan takes in the period from 2016 through to 2020 – and placed environmental action as high on the priority list than it ever has.

According to this analysis of the plan from EcoWatch, China has pledged to a 48% reduction in carbon intensity levels on 2005 levels by 2020. Co-incidentally, this is above the 40-45% reduction it pledged in Paris last year.

The five-year plan also set out a massive investment in rail, while it imposed stricter fuel economy standards on auto manufacturers.

This means invariably that a lot of auto-manufacturers in the country will have to end up investing in more fuel efficient engines and hybrids, but a lot of this investment may make its way to the electricity market – and therefore the lithium ion battery market.

Given the renewed focus with which the Chinese government is focusing on environmental regulation, could some of the numbers around electric vehicle uptake be slightly behind the eight ball?

China is coming off a very low base when it comes to environmental regulation, so therefore it would be easy to suggest that there’s more scope for growth for clean energy.

When it comes to raw material providers of lithium, this spells very good news.

Chile has been touted as a major lithium player given its brine reserves position, but has thus far kept its powder dry. This means producers currently in the market will essentially have an established reserves position once China starts to move into the market lock, stock.

So, the question then becomes whether current producers have been priced correctly.

After all, it seems like investors in western countries have only really been exposed to the Tesla story – but not the larger one playing out in China.