There has been much hype around Lithium (and Lithium related stocks) recently, as prices of the metal skyrocket writes Sam Green, Advisor at Options Educator, TradersCircle.

The prices of lithium and related stocks have risen on the back of strong demand growth for the silvery-white metal, with lithium consumption doubling in the twelve years from 2000. 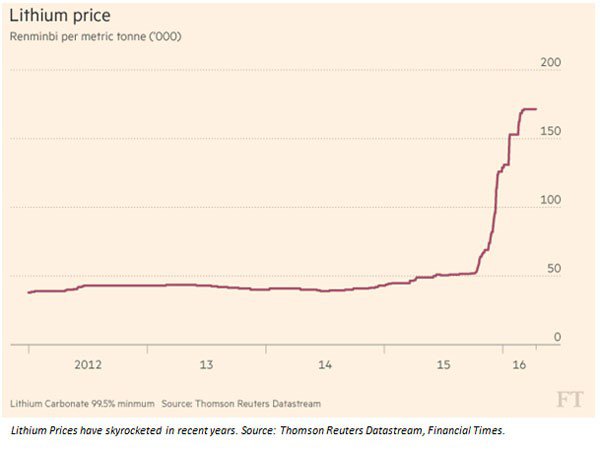 The lithium-ion rechargeable battery market is forecast by Roskill Information Services Ltd, to grow at 21.5% per year. Much of this growth will be driven by the automotive sector, which uses large format lithium-ion batteries, which can contain kilograms of lithium, rather than the couple of grams in our phone batteries.

Caltex Australia, an oil refiner and seller reported their half-year earnings results today. Following the release, CEO Julian Segal provided commentary on their view of growth in electric vehicle use. Mr Segal believes that electric vehicles will eventually replace traditional internal combustion vehicles, in much the same way that the motorcar replaces the horse and buggy. However, he believes it could be a few years before the major transition takes place.

“Certainly you are not going to have any significant dent in the next 5 to 10 years at the very least,” Mr Segal stated this morning.

As an oil refiner and seller, Caltex has a vested interest in keeping internal combustion engines around. Therefore, Mr Segal’s comments can be seen as something of an admission from the fossil fuel industry that electric vehicles will soon become pervasive on our roads.