Was last night’s sell-off the start of a broader reality check?

There were a number of market catalysts at play in the US overnight with President Trump reinforcing infrastructure spending promises, the Fed spooking the market by flagging its intention to reduce its $4.5 trillion balance sheet, IEA data pointing to higher than expected oil inventories which took the wind out of the sails of energy stocks and positive employment data.

This resulted in a rollercoaster ride for the Dow as it increased from the previous day’s close of 20,689 points to hit an intraday high of 20,888 points before closing at 20,648 points, broadly in line with the day’s low. 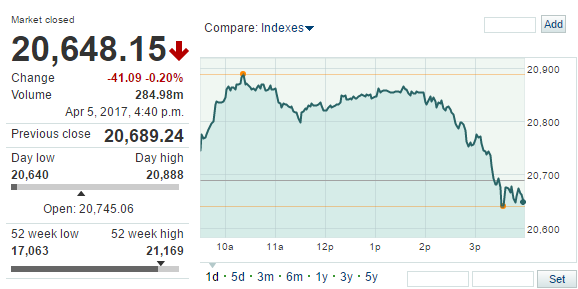 With regard to the overall market the big swing factor was the release of Fed minutes late in the day. In somewhat uncharacteristic fashion the Fed even bought into the sharemarket performance, suggesting it may have run ahead of itself by pricing in the proposed Trump administration’s fiscal stimulus initiatives.

On that note, Trump reinforced his trillion dollar infrastructure spend, as well as indicating his emphasis on a swift move to project commencements across all areas of infrastructure.

He promised to cut red tape around project approval processes, resulting in a reduction from 10 years to one year in terms of getting projects underway. Once again, another bullish promise which sounds a little too good to be true.

Trump even went so far as to say that if a project would take more than 12 months to get underway it would be wiped. Perhaps this is his get out clause if the number of projects promised doesn’t meet expectations.

Strong job numbers were the catalyst for the early market surge, while the Fed commentary was responsible for decimating those gains towards the end of the day. Negative sentiment is likely to flow into other global markets, and quite possibly US markets could experience further downside.

However, it could be argued that commentary by the Fed was an overdue reality check. The country’s balance sheet looks just as ugly today as it did under the Obama administration.

If anything, Trump’s multi trillion dollar infrastructure spending and tax reduction promises are more unaffordable today than they were just over 12 months ago when the Dow was 5000 points shy of its current level.

The meteoric rise since Trump Day (T marks the spot) can be seen in the following chart, as can the unprecedented 5500 point rally between February 2016 and March 1, 2017. 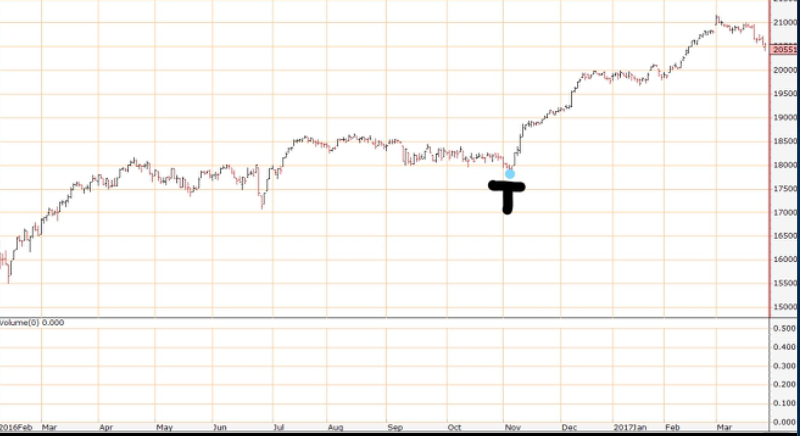 Spike in the Dow not supported by relative corporate earnings growth

The 14 month/35% increase in the Dow certainly hasn’t been supported by corporate earnings growth, which means much of the momentum has been driven by hope and hype, a dangerous combination that can result in markets rapidly unravelling, similar to the tech and mining ‘boom to bust’ scenarios that have unfolded in the last 20 years.

While both of those meltdowns had severe repercussions, it is important to note that the booms were founded on genuine positive industry dynamics. There was a tech revolution that drove the tech boom and there was the emergence of China which predominantly drove real supply demand based rises in commodity prices.

There isn’t an industry specific quantum change that has driven markets higher in the last five months. There was a presidential election in November which triggered a circa 3000 point market rally, and none of the promises that underpinned that election victory have materialised to date – in fact some have already fallen by the wayside.

While market commentators are pointing to indicators such as job numbers, business confidence and retail spending these are areas that can also be beneficiaries of a change in sentiment. Businesses assume that conditions are about to change for the better and begin to invest in capital goods, as well as human resources.

Hence, this has a positive impact on GDP from a broader perspective, but more specifically there is jobs growth which results in improved consumer confidence, increased household spending, which in turn generates earnings for businesses.

However, if the fiscal changes promised by Trump don’t materialise, confidence fades, the earnings boost anticipated by businesses isn’t realised, companies are forced to cut costs by laying off staff and reducing investment in equipment, and the cycle unwinds.

Unwinding the balance sheet isn’t a matter of if, just when

With regards to the broader US economy, a balance sheet adjustment has to happen sooner rather than later, and there is no hedging around the fact that this will have a negative impact on equity markets.

In Paul Keating terms there will be a ‘recession (of sorts) we had to have’ moment in time, which could well present itself at a stage when it becomes apparent that Trump can’t deliver on his promises of fiscal stimulus and the Fed bites the bullet and takes the hard decisions in terms of monetary policy to restore true economic equilibrium