We have compared the two companies because they are both in the technology industry and are established leaders in their specific niches. Furthermore, both companies have a similar market capitalisation, and they are leading manufactures.

The analysis compares the age and market cap of the other eight selected companies. Apple, founded 45 years ago, has the highest market capitalisation of $2.07 trillion. 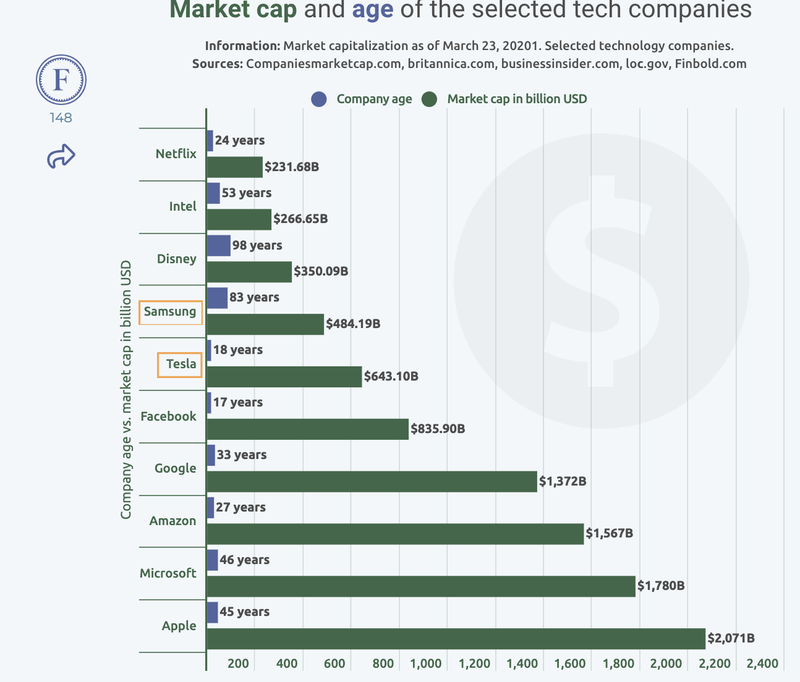 Why Tesla’s market cap has soared in fewer years

Despite being two big players in the tech world, Tesla’s market capitalisation has obviously grown at a faster rate to rank higher than Samsung. The rapid surge has been aided by the fact that the company is benefitting from a general euphoria around electronic vehicle stocks, alongside the tightening of emissions regulations globally. The firm has also cemented its position as a key player in the electric vehicle market hence poised for growth.

Worth mentioning is that Tesla’s market capitalisation significantly grew in 2020. The stock split made it more affordable for individual investors to own a part of Tesla driving retail investor enthusiasm. At the same, the firm benefitted from the surge in technology stock witnessed during the coronavirus pandemic. Since going public in 2010, Tesla’s stock has ballooned by over 20,000%, while last year alone, the stock rocketed by over 700%.

Furthermore, Tesla CEO Elon Musk can not be overlooked in the company’s market cap growth. Musk is outspoken and commands a loyal social media following through platforms like Twitter. He inspires an army of Tesla proponents and investors thanks to success accomplished by his other affiliated ventures like SpaceX and PayPal. Musk’s position in the tech industry cannot be easily emulated by other tech industry players.

As Tesla’s market surged over the past decade since going public in 2010, Samsung has fluctuated. The market cap has benefited from the company’s position as one of the leading 5G chipmakers. The demand for 5G chips and devices has surged as the technology continues to take center stage.

However, the market cap’s growth partly stalled amid corruption scandals that hit the company. The conglomerate’s Vice Chairman and heir Jay Y were arrested over a corruption scandal linked to former South Korea President Geun-hye. Such instances slowed down the company’s growth in valuation, giving room for new players like Tesla to surge forward. Although Tesla has been hit with several controversies, especially on meeting demand, the events have not significantly affected its valuation.

Samsung also faces stiff competition as competitors like Huawei continues to slash the prices of their smartphones. Furthermore, Huawei also leads with the highest share of 5G-ready devices globally, while Samsung lags behind. Elsewhere, Tesla continues to be a market leader in the EV sector, fuelling electric vehicles’ mass adoption globally.

Although Tesla has used fewer years to amass a higher market cap than Samsung, both companies differ in profits. For 2020, Tesla reported a profit of $721 million while Samsung recorded about $32.1 billion.

Although Tesla’s market cap has surged sharply, there have been concerns from different financial sector players. Some predict it will soar even higher, while others urge investors to be cautious, stating the stock is driven mainly by speculation.

Oliver is a revolutionist in the sense that he embraces change as it comes. He is passionate about blockchain, digital assets, the Internet of Things, Artificial Intelligence, and all evolving technologies. At Finbold.com Oliver covers data-driven stories and researches that reveal meaningful insights for the reader.

This article was originally published on Finbold.com