Is Australia heading for recession? 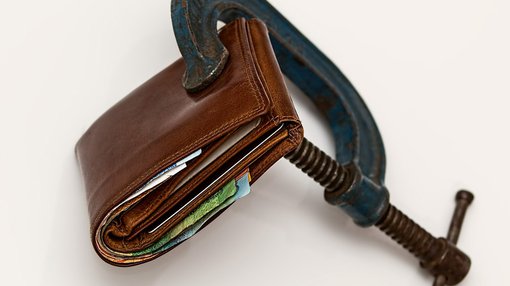 According to director Mike Cornips of options educator TradersCircle, Australia could be heading towards a recession.

As taxation revenue for all levels of Government was released on 1 December 2015 by the Australia Bureau of Statistics (ABS), Cornips says it highlights the difficulty the current Government has in trying to make any impact on the budget deficit the figures are concerning.

The chart below (from 1990) shows the annual growth in taxation revenue.

“The previous falls in growth towards zero coincided with the economic downturns of 1990 (the recession we had to have: Paul Keating), 2000-01 and the GFC in 2007,” Cornips says. “According to former Greek finance minister, Yanis Varoufakis, the weakness in the domestic economy and the weakness in the Chinese economy means Australia will have a recession.” 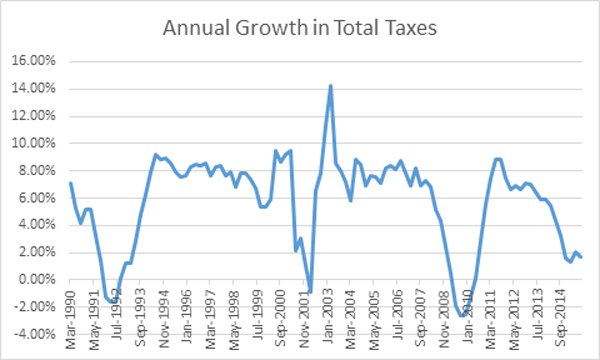 Also released yesterday was Australia’s terms of trade (ToT) figures which fell another 2.3% for the quarter and 10.9% for the year, the lowest for 9 years. ToT figures reflect the prices Australia receives for exports relative to imports.

In terms of the quarterly Current Account figures for September, this is determined by adding the balance of goods and services together with paying interest and dividends on past accumulated deficits (called Net Primary Income).

“Domestically State and Federal Governments must cover deficit spending, with figures showing that the market value of Government debt securities increasing $55 Billion for the year, up until 31 October 2015, for a total issued of $649 Billion.”

One of the main risks of our ever increasing deficit in Australia’s International Investment Position and our Governments’ domestic debt position is a downgrade in Australia’s Sovereign risk rating. This will flow directly into our Banks’ cost of debt funding.

“Australia’s Government will seek ways to reduce the deficit (contracting demand), with an economy possibly moving into a recession, together with the pressure of rising funding costs to fund past massive International deficits, certainly highlights the headwinds Australia faces over the coming year.”