Is ASIC going after SMSF auditors?

It appears on the surface that the Australian Securities and Investment Commission (ASIC) has its sights set on auditors of self-managed super funds, with three auditors gone within a week.

ASIC has moved to ban three SMSF auditors in quick succession, having previously only banned one for the entire 2015.

In the past week, it has banned James Dermody, Abe Samuel, and Manoj Abichandani, all from New South Wales.

The cases were referred to ASIC from the ATO.

“Auditors are important gatekeepers who play a crucial role in the SMSF sector. SMSF auditors must maintain high standards or ASIC will hold them to account,” ASIC commissioner John Price said of Dermody’s black-balling.

However, Finfeed understands that this is a coincidence rather than a targeted campaign.

SMSF auditors were first required to be registered back in 2013 as a way to make sure auditors met base standards.

While the latest black-balling is coincidental and not part of a particular pattern or investigation, it does highlight the ongoing importance of the SMSF sector.

SMSFs have always been an important piece of the puzzle, and in fact represent roughly a quarter of all financial assets held in superannuation funds. 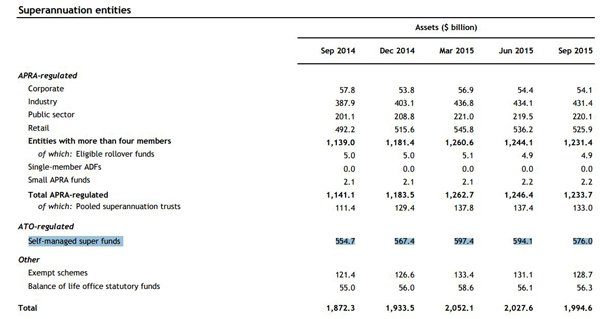 The value of assets held in Australian superannuation accounts

The role of SMSF funds in the superannuation sector has long been an issue kicking around since the GFC, when the proportion of SMSFs against regular superannuation funds went up.

While there is no one singular reason for the rise, one of the reasons is that members fed up with seeing their funds making losses during this period decided to pull up stumps and give it a go themselves.

With more people electing to run their own superannuation accounts, there has been increased scrutiny of the regulation and activities of these funds.

It also unleashed a wave of people and organisations offering to set up SMSF accounts for people for free.

ASIC in the past has taken several of these operators to task for suggesting the set-up of the funds would be free, when in reality it wasn’t.

The increased scrutiny of SMSF auditors plays into the increasing oversight of SMSF funds, which traditionally have allured those with a more lassaiz-faire attitude.

With the popularity of SMSF funds not abating for the next little while, regulators will and are almost obliged to do everything in their power to make sure those with SMSF funds are afforded the same protections that those in a regular fund are.

The banning of auditors by ASIC is simply one part of this.