Investors are in the know… the TechKnow 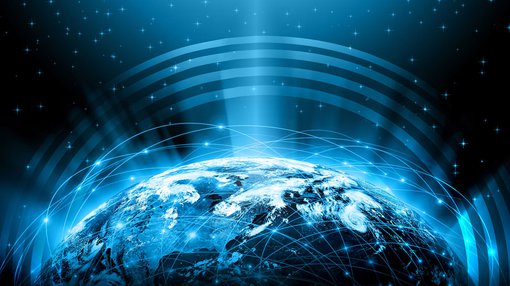 When investing in tech stocks it can be difficult to sort the wheat from the chaff. The next Facebook or Amazon (which are both currently down in trading), may not be so apparent anymore.

This may be due to the glut of tech companies putting on a publicly listed face and taking revenues from each other.

So how does an investor make an informed decision?

The idea is to go back to basics: analyse a company’s earnings, expected news, long term outlook etc...

The companies that presented at the recent TechKnow roadshow delivered that sort of insight recently to packed out conference rooms around the country.

In total, 17 companies laid out their financials, business models and goals to interested investors who can now go away and make up their own minds about whether to invest in drones, design or even shark mitigation.

On Monday, we reported Michael Eidne’s insights about the future of technology.

Today, we’ll look at the businesses and products.

The conference was kicked off by Brendan Roberts of 9 Spokes International. 9 Spokes is an online tool that provides a real time view of a business’s financial and non-financial position, by integrating online software in one place.

This New Zealand company founded in 2012 has its sight set on the dramatic growth in cloud use by SMEs.

Roberts suggested that in 2016 small businesses will spend US$4.16 billion on cloud based apps. According to research he presented, 80% of US-based SMEs will have adapted to the cloud by 2020.

9 Spokes has already partnered with the likes of Xero, MYOB, Quickbooks and Dropbox among many others to make light work of software curation and it costs nothing for customers.

As far software as a service providers go, 9 Spokes has a pretty impressive business model.

You can read more about them here.

Next to the stage was Nikki Parker, VP Growth and Investor Relation at data security company Covata.

The following slide from Ms Parker’s presentation gives you an indication of just how important company security has become in light of the amount of data generated: 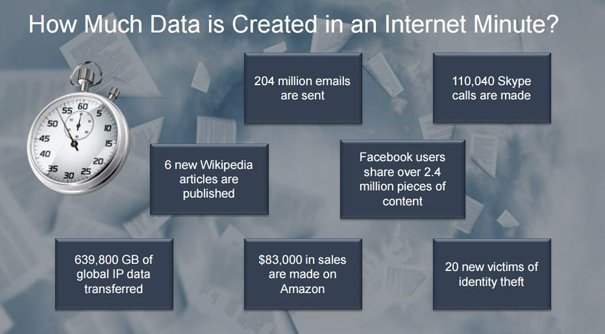 With the amount of data generated by companies, security should be front of mind.

Bottom line: keep your data close and your security closer.

When Fintech meets Robo advice. The jury is still out on financial advisory robots, but there is no doubt this is a growing industry. With the banks jumping on board, there is a shift occurring that must have financial advisors shaking in their boots.

Decimal Software’s Nic Pollock took us through the rise of robo finance and Decimal’s $10B+ total revenue opportunity for robo-advice by 2020.

The company sounds like a title from a New York police action movie... and in fact it’s not far off.

Department 13 is focused on counter-drone defence technology, focusing on the rapid rise of drone incursions.

With the proliferation of drones, strong security measures must now be taken against them.

The company listed on the ASX earlier this year and since then has positioned itself to secure key US government contracts.

In the following CNBC video, CEO Jonathan Hunter from Department 13 explains how the firm provides drone-detection services and the ability to override drone controls.

The company has built a platform that provides call recording, recording management, access and advanced functionality in the cloud. Recordings can be made, accessed and managed from anywhere in the world, instantly.

Last year, The Australian said call recording was a global gold mine and given Dubber’s rapid ascent, they could be right.

One company that Finfeed has been tracking is Kabuni, an etsy-like platform built for designers and based on inspiration boards.

Kabuni is a platform for the home design community that gives designers, artists and local artisans the tools to collaborate and buy and sell their goods.

CEO Neil Patel gave an impassioned speech about building better homes for everyone.

The video below explains how it works, perhaps better than we can...

What sets Kabuni apart is its omni channel platform that looks a little like this: 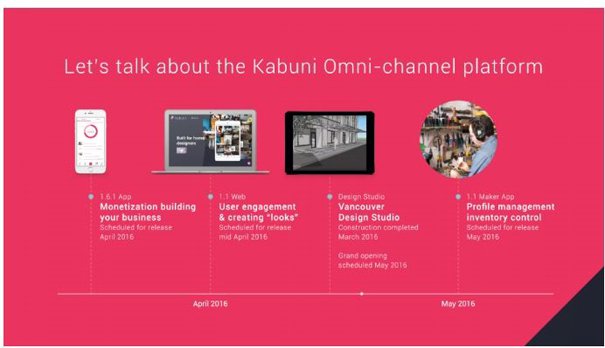 Kabuni’s goal is to unify a fragmented marketplace, bring it all onto the one platform and, in the process, create a profitable and lucrative business everyone.

It is well on its way to achieving this aim and we’ll keep you updated on the company’s progress.

Here’s an interesting concept: a sourcing and recruitment cloud based solution that delivers talent on demand.

That is how Livehire labels itself.

The company is scaling up at the moment, having spent four years and $3 million getting its platform right to take a first mover advantage.

It has some pretty significant people behind it including Geoff Morgan, chairman Morgan & Banks and Talent 2 and ex Chandler Macleod CEO Ian Basser.

By now we are all aware of the complexities and complications involving mental health, particularly depression.

According to Medibio CEO, Kris Knauer 350 million people suffer from depression and one million suffer so badly they leave this mortal coil.

Something needs to be done to curb this problem.

Medibio has built a digital mental health platform for the assessment and management of mental health through a quantitative, objective test that it believes will create savings for the health system and better patient outcomes.

Norwood’s World Phone sounds pretty cool, especially if you are a constant traveller.

The platform allows you to get a nearby number (local regional) so that your contacts can call you without the pain of dialling your international number.

You can set up one or more numbers in any of 70 plus countries worldwide.

The uptake thus far has been impressive with more than $700,000 in-App purchases and more than 4 million downloads.

Imagine being able to monitor respiratory disease from your smart phone.

That’s how smart your phone has become and also how canny today’s medical fraternity is.

Use your smartphone to diagnose your health.

The company is fully-funded to bring its product to market and has medical backing.

The company is producing 10% growth per month and is ahead of revenue projections.

That’s a classic line from Jaws and it should fill you with dread, like this...

Now we’re not suggesting, there’s a monster shark out there looking to terrorise a town, however check out this table from Shark Mitigation Systems’ presentation. 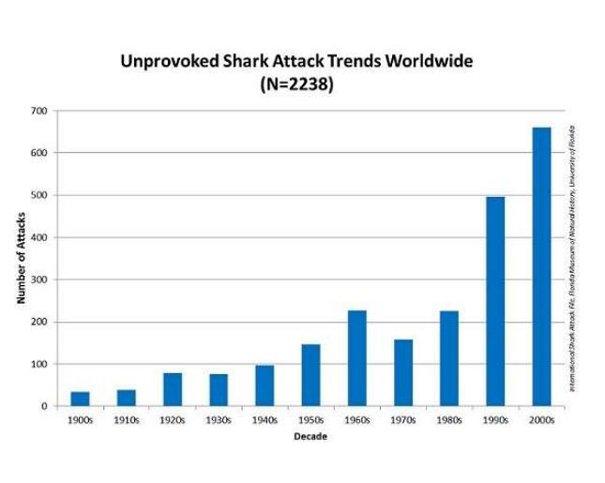 That’s a pretty significant increase in shark attacks, hence the raison d’etre for SMS, which has developed deterrent technology now embedded in a range of products including wetsuits. Its Clever Buoy technology also assist in keeping beaches safer.

The company has gained significant global attention and listed earlier this year.

Another we have our eye on.

Regular readers would have followed Stargroup’s progress over the course of the last six months.

It is run by Todd Zani who was previously the founder of Ezeatm in early 2000, which became the largest ASX listed ATM deployer with a market capitalization of $34.45 million.

The way Stargroup is growing quarter on quarter, he is expecting to repeat the feat.

Contrary to the rise of cashless payments, the ATM market is still growing with $140.8 billion in cash withdrawn from ATMs.

Meanwhile eftpos is also continuing to grow, particularly with the introduction Paywave, which also plays into Stargroup’s hands.

That says it all really.

It allows for brands to pay for consumer access to the mobile internet.

Syntronic has several catalysts to look out for in 2016, including its ASX listing and capital raise and the launch of Freeway 2.0, with expansion into Latin America.

The global internet advertising market grew to be worth US$11 billion per annum in 2013, so it’s a pretty good space to be in.

Mpire, through its cloud based software platform nxusTM acts as an intermediary between advertisers and clients and its network of affiliates that deploy digital advertising marketing to consumers.

Mpire has a solid growth track record with quarterly growth shown at 40% and half year revenue reported at $17.6 million.

Do you wish you could aggregate your social media platforms?

Well, that’s what Thred does.

The current social media landscape is large and Thred is currently the only system that combines the many platforms available and eliminates social media noise. 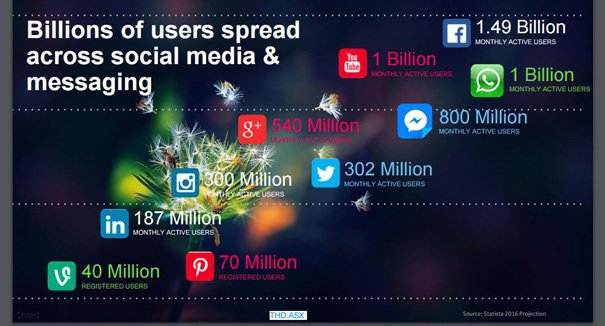 The Thred application recently grabbed public attention when Microsoft Corporation announced it is integrating Thred into Office 365 and its cloud based Azure platform.

It is now seeking $10 million for its ASX listing.

It’s the fantasy wagering that interests us most.

TopBetta offers fantasy wagering with revenue generated from entry fees that are charged when a customer enters a tournament.

TopBetta customers “buy-in” to the tournament, and each buy-in increases the prize pool.

The TechKnow conference, hosted by Vertical Events, is still in its infancy but growing rapidly.

“The challenge within the team of Vertical Events, DJ Carmichael, Fosters and PPR was to make Series 2 as good as Series 1.”

According to Vertical Events MD Stewart McDonald, they need not have worried.

“Fifteen new companies came on board quickly with two from series 1 being the first to sign up,” McDonald said.

“After presenting in Brisbane, one company MD breathlessly reported a purchase of 1-million shares by an investor,” said Crabb.

“The mood among the investment attendees was positive with many impressed by the advances in technology and the investment opportunities they now represent.”

Series 3 is slated for October.