Investing in tech plays is a funny thing, where it seems making money is not the actual point of the exercise.

Instead of investing in undervalued stocks with with strong fundamentals such as BIG, tech investors have been notoriously attracted to blue sky potential like a bird to shiny things.

Then, of course the penny dropped that these companies weren’t actually making money and the blue sky potential turned out to be rather more pie-in-the-sky.

Inflated assets ensued and a heck of a lot of big-name investors lost their shirts over the whole thing.

However, speculation is starting to mount that we haven’t learned a thing from the whole episode and we’re in for the dot-com crisis 2.0.

It seems that venture capital and shareholder money is flowing once again, and the cash is making its way into the pockets of companies who have the best sales pitch rather than business fundamentals.

You know, things like revenue, loss and profit and all those unsexy things that tech investors sometimes overlook in favour of chasing a dream.

From that point of view, a reversal of thinking is required to instigate a reversal of fortunes. New players like BIG, offer potentially sensible investment opportunities because their numbers back up their sales pitch. When you look at their numbers in comparison to their value and that of their competitors, it is evident they are undervalued.

Just as a demonstration, we’ve picked four tech stocks listed on the Australian Securities Exchange with varying market valuations to illustrate the point.

We’ve chosen revenue from ordinary activities (or rather receipts from customers), as this best demonstrates the strength of the underlying business rather than blue sky potential.

As you see from the above, Big Un has by far the best receipts from customers.

It’s actually making a bit of money. It too is an early-stage tech play, but it has some solid revenue under the belt. So one could be forgiven for thinking that it would be attracting most of the shareholder curiosity.

If it were a miner or anything else – it may very well be.

However, 1 Page, described as one of the emerging tech ‘unicorns’ has managed to attract a share price of $4.50 and some big names including Buzzfeed, Accenture, Omnicom Media Group and Pandora onto the client sheet.

Meanwhile fellow employment space start-up Reffind Ltd signed up massive clients such as Johnson & Johnson and IAG this year but again this isn’t borne out in the revenue.

Again, sizzle but no steak.

Nearest competitor to BIG is MTL which has a share price of 8.2c on the back of revenue of just $31,000, one of the rare examples of the market actually looking at the balance sheet of tech companies.

If they had, it stands to reason that BIG would be higher valued than its current price of 19.5c.

What BIG actually does

BIG has been signing clients up left, right, and centre, and that’s starting to be reflected in its revenue base.

With a recent quarterly receipts from customers figure of $407,000, this demonstrates that BIG is actually signing up clients, which is a nice change of pace for a tech company.

Sometimes it can be a little bit difficult to peg down what the next big tech play actually does, but BIG is tapping into the under-sold small-to-medium enterprise video advertising market.

It offers smaller companies the chance to host online video reviews of their businesses on the BIG TV platform.

Think Urbanspoon/Zomato but for video.

With more bandwidth being available to mobile users now than at any other time in history, the consumption of online video is simply becoming ingrained in the online behaviour of consumers.

However, smaller companies often don’t have the budgets for hiring their own cameras, lighting and related equipment.

Normally, an online video can cost about $1000 a pop, well out of the reach of small companies just scraping to get by.

BIG, however charges about $399, undercutting others who may provide the service.

It’s offering SMEs a chance to play in the space they normally don’t get to play in. Imagine your local corner store having a flash video people can watch?

If the customer pipeline is anything to go by, the SMEs are paying attention. 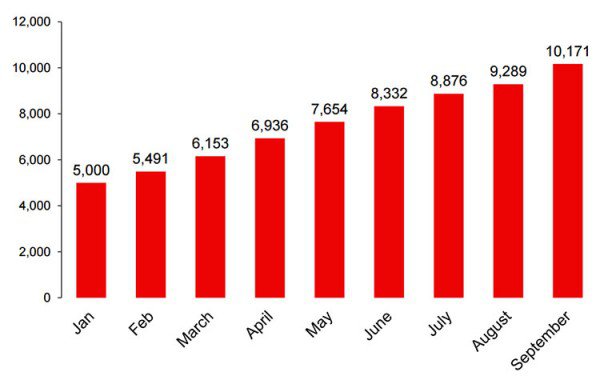 Customer growth over the past year for BIG

BIG is actually making money and attracting new clients all the time, and has recently expanded to the UK to tap that market too.

However, despite the strong growth and revenue flowing in the near-term, tech investors are seemingly still chasing that blue sky punt.

NB: This article has been commissioned by BIG UN Limited