The inner city conundrum: to invest or not to invest?

Inner city apartments are great. I’ve lived in several, and each time they offered the chance to save on commute time and avoid house-priced rent, while having ready access to the CBD and all the music, food and entertainment the inner city lifestyle has to offer.

But as an investment? That’s a different story.

On the one hand apartments can offer an affordable way into the market with a more realistically sized mortgage. On the other hand, you only need to look at the amount of cranes littering the skyline in our capital cities to gauge how many apartment complexes there’ll be coming onto the market very soon.

Lots of extra apartments available can mean tenants paying lower rent, or having no tenants at all – the latter being catastrophic for most buyers.

In Fitzroy – the holy mecca of brunch-loving vegans and dog friendly cafes – there are always cranes, and always real estate signs trying to sell apartments from the future.

But it’s hard to say what the future holds, with many analysts seriously concerned about a future apartment glut. Melbourne is the primary concern, but Brisbane, Sydney and the Gold Coast all pose risks.

The warning goes that the risk is even bigger for off-the-plan apartments as they could well end up worth less, once built, than what the owner paid in the first place. This is neither good for the owner nor the bank who provided the credit.

For those younger buyers for whom it’s their first go at property ownership, it could also wind up as a tragic ejection from a market that they’ve long dreamt of getting into.

The breakdown in the chain

In the capital cities where the risk is greatest, developers have looked to address the supply/demand imbalance by targeting foreign buyers – particularly from China. The idea being that Chinese investors can absorb the excess housing stock (and presumably, the potential losses to come).

However, to reduce the exposure to risk, last year the big four banks clamped down on foreign lending. State governments in NSW, Victoria and QLD also introduced surcharges and taxes for offshore buyers.

So even if the Chinese solution wasn’t stymied by the clamp down on lending... foreign or not, investment properties need tenants to assist with paying off the mortgage – yet vacancies are predicted to rise in inner-city Melbourne and Brisbane, and some parts of Sydney.

Deloitte Access Economic has predicted oversupplied unit markets in inner Melbourne could record price falls of up to 15 per cent in 2019 – which could be devastating for some owners, and banks which provided them credit.

Brisbane is seeing falling demand with a concurrent swathe of new apartments soon to be finished. In the inner-north of Brisbane, rental vacancies are increasing in the face of an extensive pipeline of projects in the works. At the same time, unemployment is rising in the area.

There could be a bulk of apartments in Melbourne, Brisbane or Sydney where there’s a significant breakdown in the supply and demand relationship as well as large discrepancies between what was paid for a property and its future worth.

Last year Macquarie Group and AMP Bank both curbed their lending for high-rise units in response to the widespread concerns of an apartment glut – it remains to be seen whether actions by the government will intervene in time to avoid a price crash.

Of course the potential for an oversupply of apartments in inner city areas pushing prices down is not just a sad story for those who bought apartments, both existing and off-the-plan.

Obviously, banks and lending institutions will be exposed to significant risk should there be a crash in prices. Analysts are particularly worried about price slumps triggering a rise in settlement defaults for off-the-plan properties, and mortgage defaults in general.

In this scenario, if owners finds themselves unable to secure tenants and meet repayments, they’ll also potentially be unable to sell the property at the same price they paid for it... and banks are left absorbing potentially massive losses.

There was also the issue last year of ANZ and Westpac being duped by some Chinese investors making false declarations about foreign income. Let’s hope that chicken does not come home to roost, either. And that there aren’t even more of them hiding in wait until a crash hits.

However, some believe there’s a shortfall between new apartments and expected demand over the next few years. Just take a look at the vacancy rates for units across capital cities between August 2015 and August 2016: 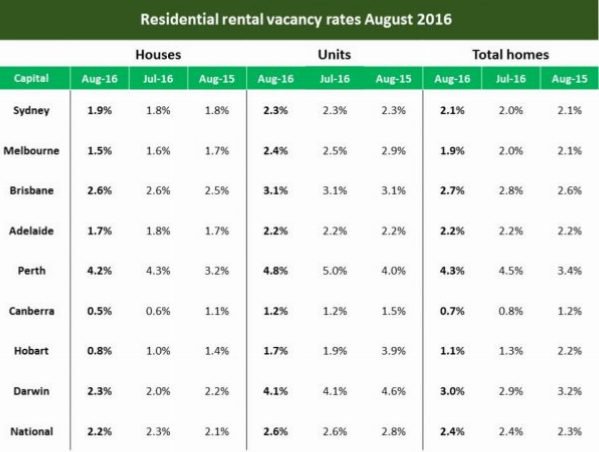 For Melbourne, Sydney and Brisbane you can see they all sat within a fairly tight range, and all below 3.2%.

So, logically, you might expect that with 38,000 new apartments in those three cities being completed in the next 24 months, there’s very likely to be a growth in the vacancy rate. And it could be by quite a bit.

Westpac economist Matthew Hassan wrote to clients in October last year saying that while high-rise apartment completions had entered a “sustained rise” in Australia, “the prospect of a market-wide oversupply looks remote. However ... it does not preclude pockets of oversupply emerging either for short periods ... or due to a mismatch between supply and demand.”

It’s likely we won’t know how accurate any of these predictions are for a year or two – but at that point, it may be too late, particularly for the more vulnerable first-time buyers who also face higher interest rates, slower income growth and generally higher costs of living.

At any rate, there’ll be plenty of people hoping the situation doesn’t end in blocks of ghost apartments or mini ghost cities, as has happened in China.

If there is a coming mismatch between supply and demand, it’s possible only certain areas will be affected by a sharp downturn in prices – in which case, the banks will hopefully be able to ride it out, but individual investors could get burned.

If you’re considering buying an apartment, particularly if you’re looking at off-the-plan, it is worth doing extensive research into how many new apartments are in the pipeline for that area, and the full gamut of future factors impacting on demand.

If considering investing in any of the big four Australian banks, keep in mind that mortgage exposures in Brisbane and Melbourne are substantial.

It’s estimated that for those two cities alone the figure is around $10bn-$20bn. And in Sydney, where the risk of a crash in prices is lower, the exposure is more like $20bn-$30bn. These figures are according to the RBA’s ‘Financial Stability Review’ from October last year.

The impacts of a potential apartment glut won’t be felt until the next few years of off-the-plan apartments are completed. As always, it pays to look several years into the future before investing in property.