Ignore the naysayers – commodities are here to stay

With commodity markets continuing to suffer from lacklustre demand, you would be forgiven for thinking that commodities are dead.

Commodity prices have tumbled across the board over the past five years, leading some Barclays analysts to exclaim that “The last 5 years have now been the worst period of performance since 1966.” 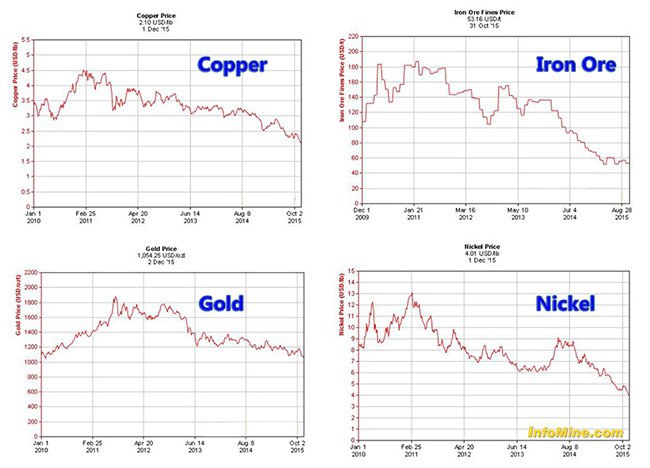 Miners have it tough because of falling prices but then again, commodities cannot go up all the time. Markets are cyclical and for the time being, the current cycle is one of deflation on the back of slowing demand from emerging economies such as China and India.

Picking through the highlights

The steep falls shown above have led to proportional declines in the values of major producers such as BHP Billiton (ASX:BHP), Rio Tinto (ASX:RIO) and Glencore (LON:GLEN). 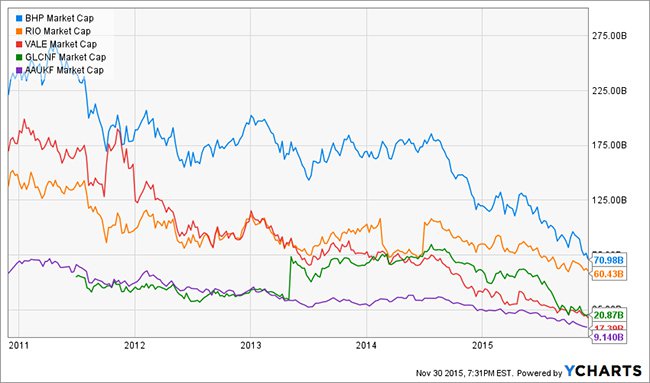 Despite the steep selloffs and falling market caps, mature producers such as BHP have still been able to raise their shareholder dividend by several multiples over the past five years. As commodity markets have faltered, many producers have embarked on implementing measures to keep their shareholders happy including higher dividends and generous share buy backs.

From a historical perspective commodity prices are not at their all-time lows – far from it. We could still see yet more declines to lower lows which would presumably be accompanied by lower share valuations of the top major miners – but are market caps and share prices really that important?

Aside from being a method to evaluate value over time, market caps and share prices do not acknowledge the historical aspect of cycles i.e. prices will always fluctuate – sometimes to extremes – but for a mining investor, the key is to find companies that can successfully weather the market downturns in order to maximise shareholder returns in an upturn.

Where to for value?

Commodity prices are on the wane, but that doesn’t mean that all resource companies are struggling.

The efficient ones are able to sustain operations but at a smaller profit margin. The inefficient ones struggle to readjust and are forced to take remedial measures such as cost-cutting, capital raisings and farm-outs.

Speaking at the International Mining and Resources Conference (IMARC) last month, Hedley Widdup, former geologist, and now, Executive Director at Lion Selection Group, says that mid-tier gold producers is where most value can be found for commodity investors.

The reasoning is that gold is rather better insulated from supply/demand hiccups and has a far greater sale potential compared to other less versatile metals such as nickel, zinc or even copper.

If investors are looking for bargain investments, Mr. Widdup sees value in junior gold producers such as Kidman Resources (ASX:KDR), Silver Lake Resources (ASX:SLR) and Perseus Mining (ASX:PRU). Whereas if investors are looking for the rising stars of the future, a good place to start would be mid-tier gold producers such as Saracen Mineral (ASX:SAR), St. Barbara (ASX:SBM) and OceanaGold (ASX:OGC).

One factor investors can look out for, to spot the early signs of a future commodities success story, is looking for companies that are actively seeking acquisitions and growing their resource portfolio in today’s downturn. If done well, today’s acquisitions for cents on the dollar could generate excellent returns as and when commodities enter their next cycle.

Metals X (ASX:MLX) is one producer that is on an acquisition spree.

MLX bought the Comet gold project from Silver Lake Resources for $3 million last month, The 50sq.km project hosts a mineral resource estimate of 3.8 million tonnes at 2.9 grams per tonne for 353,000 ounces of gold.

In parallel, MLX is in the midst of a $86 million hostile takeover of Western Australian producer Aditya Birla (ASX:ABY). The offer made offers a 60% premium to ABY’s current share value.

Having its first takeover attempt rejected by ABY’s board, MLX has extended its all scrip offer for the struggling miner until 15 December 2015.

ABY operates the Nifty copper mine which requires investment and development. MLX is going after Nifty because it’s comparatively cheap to do so given the market conditions and ABY’s internal difficulties. MLX Chief Executive Peter Cook says that “we will not wait forever as other copper assets are coming onto the market”. “If you can’t get in there [Nifty] to fix it up in a short period of time it may be stuffed forever,” said Mr. Cook.